We’re past All In and that isn’t likely to mean anything around here as we’re still a few weeks away from catching up to that point. Instead we might get some build towards Death Before Dishonor, which is still a few weeks away as well. In other words, Ring of Honor’s schedule strikes again. Let’s get to it.

We open with a recap of last week’s Six Man Tag Team Title change with the Young Bucks and Cody beating the Kingdom, despite the illegal man being pinned.

Sakai is defending and Mandy Leon is on commentary. Feeling out process to start with Madison taking her down into a quick cradle, only to get backslidden for two. A fight over a small package lets them roll all over the ring before Sumie finally gets something, followed by a standoff. Some chops to the neck have almost no effect on Madison, who takes her down with a front face DDT for two more. They seem to botch something up against the ropes before a double clothesline puts them both down as we take a break.

Back with an exchange of forearms going to Sakai and a fisherman’s neckbreaker getting another two. A missile dropkick and tornado DDT give Madison her own near fall. Sakai grabs a fisherman’s buster but Madison rolls into a cutter to drop the champ again. Back up and a quick Smash Mouth retains Sakai’s title at 9:07.

Video on Shane Taylor vs. Josh Woods. Taylor knocked him cold with a right hand and Woods thinks it’s loaded.

Woods goes straight at him to start but the much bigger Shane pushes him away. A single leg is broken up as well so Woods tries to fight from his back, eventually pulling Taylor into a kneebar. That’s broken up as well and Shane takes him outside for a drop onto the barricade. A big apron legdrop crushes Woods again as the announcers recap this longer than you might expect feud.

Back in and a rather large splash gives Taylor two but Woods kicks him in the head for a breather. Woods strikes away even more to send us to a break. We come back with Woods forearming away until a knee to the face cuts him off. A cross armbreaker goes on with Woods getting the glove off. It turns out that it is loaded, which makes Woods let the hold go. Woods knew Taylor couldn’t beat him but he doesn’t want the DQ win. As expected, the distraction lets Taylor hit Greetings From The 216 for the pin at 9:39.

So Cal Uncensored says the war with the Briscoes has just begun. Next week, Kazarian will take care of Mark.

Video on Jay Lethal vs. Jonathan Gresham before next week’s Iron Man match.

Caprice Coleman is on commentary. Zanders is from Alabama and has the accent to prove it. Kross on the other hand is dressed like Goku. The fans chant about Dragon Ball Z as we wait on the no contest. Feeling out process to start with Zanders hitting a dropkick, only to eat some superkicks. Kross takes him down….and here’s Jeff Cobb to nail Kross for the DQ at 1:25.

Cobb wrecks both guys with ease. Eli Isom comes in for some forearms but Cobb gives him a look that says he has to do something about this. A Tour of the Islands (reverse powerslam) plants Isom and Cobb stands tall.

Ray has no music as Cabana calls Ray and Young Get Off My Lawn wrestlers. Before the Friends come out, Ray goes to yell at Cabana, telling him to sit there and do his job. Ray and Trent start things off but Ray tags out without saying anything. Silas throws Trent a shirt, which he smells before tossing it away. An armdrag puts Silas down and now Ray demands that he come back in.

Ray does come in and yells a lot before slamming Trent down. A hurricanrana sends Ray into the corner and Trent hits a running clothesline and it’s off to Chuck for the first time. That doesn’t go well for Chuck, who is taken down for a middle rope splash and it’s already back to Young. Chuck drops him as well and it’s back to Trent for the slingshot boot rake, followed by Chuck’s slow motion hilo to complete Two Dog Night. The big hug is broken up though and Young crotches Trent against the post.

Back from a break with Yong working no Trent’s recently repaired arm. A hair pull from the apron keeps Trent down as the heel beatdown continues. Trent dropkicks Ray in the knee but gets backdropped before anything else can happen. Young hammers away but walks into a tornado DDT, allowing the hot tag to Chuck. Everything breaks down with Soul Food and a Falcon Arrow connecting for two.

Chuck has to bail out of the moonsault but is fine enough to hit a Samoan driver to drop Silas again. Trent tags himself back in and enziguris Silas, setting up the lawn dart cutter. NOW the hug connects and Ray clotheslines them both to upset the fans again. That’s enough for Ray though, who walks away from the tag and leaves. The Dudebuster finishes Young at 11:37. 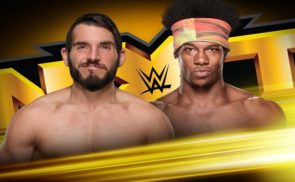 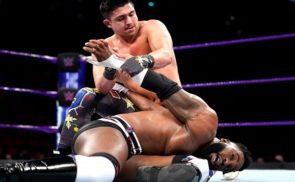