I’m not sure what to expect from this show these days and that can be rather interesting. It’s never clear what you’re going to get and thankfully Ring of Honor knows how to give you the best out of everything they offer. If that can be the case again this week, we should be in for another fun show. Let’s get to it.

Violence Unlimited issues an open challenge for tonight. Danhausen comes in, realizes he’s in the wrong place, and leaves.

We get a preview, minus Quinn McKay.

Rust and Zayne talk about being ready to step up against the Briscoes as Zayne is on his way to the World Title. The Briscoes tell them to bring it and be made famous. Rust and Mark start things off with the latter not being able to get very far off of a leg dive attempt. A headlock takeover works better for Mark but Zayne is right back up with a modified abdominal stretch.

That’s broken up and Mark unloads with some chops into the corner. Jay unloads for a bit as well but it’s already back to Mark for two off a suplex. Jay’s front facelock keeps Rust in trouble but he fights up and gets over to Zayne for the tag. Everything breaks down and they head outside, with Jay sending Zayne hard into the barricade to put him in trouble for a change. Rust gets kicked in the face as well and they head back inside, where Zayne gets belly to belly suplexed for two. Jay adds a running kick to the face but Zayne flips out of a belly to back suplex.

The hot tag brings in Rust to clean house and a Rings of Saturn with the legs has Mark in more trouble. That’s broken up and everything breaks down again. Rust is knocked outside with the Briscoes following him, allowing Zayne to springboard moonsault onto both of them. Back in and a running flip super hurricanrana gets two on Mark but Rust has to escape the Jay Driller. Jay isn’t having that though and hits the Jay Driller, setting up the Froggy Bow to finish Mark at 10:54.

Here is Rok-C for her first interview as Women’s Champion (and having her stand next to Brian Zane isn’t the best idea as he towers over her). She sounds rather nervous as she talks about how hard she has worked to get here. Now that she has proven she isn’t a cliché, she is ready to face anyone. The C in Rok-C used to stand for Confident but now it stands for Champion.

Cue the Allure to say this is their house and the C stands for…something they can’t say on TV. Cue Miranda Alize, Trish Adora, Willow and Allysin Kay, followed by Maria Kanellis Bennett. The boss makes a pair of triple threats with the winners meeting for the Final Battle Women’s Title shot.

During the break, Alize jumped Rok-C.

Violence Unlimited doesn’t like PCO being involved. Homicide and Danhausen start things off with Danhausen’s waistlock confusing Homicide a bit. A cutter into a t-bone suplex rocks Homicide and he has to go to the ropes to escape an STF. Tony Deppen and Flamita come in with the latter hitting a hard shoulder. They trade some very fast covers before it’s a double nip up for a standoff.

Deppen’s basement dropkick gets two and it’s Dickinson coming in for an elbow to the mask. Flamita kicks his way out of trouble and brings Sledge in to suplex Dickinson in a nice power display. Dickinson is back with a middle rope dropkick to put Sledge in trouble and the chopping is on in the corner. A DDT gives Dickinson two and Homicide adds a knee to the back.

Sledge’s clothesline gives him a breather and he kicks Homicide into the corner, allowing the hot tag to PCO. That means a chop off with King, who gets powerbombed for two. King is right back up with a piledriver…and PCO malfunctions, causing him to go in the wrong corner and take King’s tag. PCO starts beating up his own partners and the PCOsault…kind of hits Sledge? The miss seems to wake PCO up and it’s Danhausen coming in to clean house. It’s time for the parade of secondary finishers, with PCO back to normal. Another PCOsault is broken up and King Ganso Bombs Sledge for the pin at 15:05. 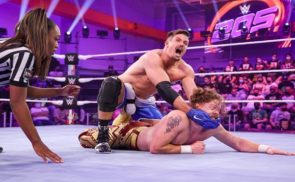