It’s time for things to get a little weird as we have the post-pay per view show taped before the pay per view, meaning we won’t be getting any kind of fallout. In other words, it’s going to be all about the wrestling and I’m not sure what that’s going to include. Hopefully they have something good here so let’s get to it.

Eli Isom and Jay start things off with Eli actually taking over for all of two seconds off a front facelock. A kick to the ribs cuts him down though and it’s off to Mark as the announcers tease spoiling a pay per view that hasn’t happened yet. Cheeseburger comes in and gets clotheslined as we take a break.

Back with Young clotheslining Burger as well before handing it off to Mark for a camel clutch. A missed charge lets Burger roll away a few times and the hot tag brings in Isom to pick up the pace. White Noise gets two on Jay but it’s the Death Valley Driver into the Froggy Bow….for two? The strong pushing of Isom continues and gets even stronger as his brainbuster hits Jay for another near fall. The Briscoes are done with him and come back in for a High/Low into the Jay Driller for the pin at 9:14.

Rhett Titus is ready to win the NWA National Championship from Willie Mack next week.

Joe Keys and Brian Johnson are in the ring and don’t like the ugly women here in Florida.

Joe Keys/Brian Johnson vs. The Bouncers

Keys wants a posedown with Bruiser, who starts a BEER chant instead. A test of strength lets Bruiser hit him in the face and an atomic drop has Keys in the corner. Another chop sends him crawling over to Johnson and the jobbers get Bruiser into the corner for a double stomping. A double slam gets one on Bruiser, who gets over to the corner for the tag to Milonas without any trouble. Everything breaks down and Closing Time finishes Joe at 5:19.

Willie Mack is defending his National Title in all fifty states and next week Florida will be state #5.

Sumie Sakai and Holidead are the seconds and Rayne charges to the ring and starts hammering away. A running forearm has Rosa in more trouble but Rayne and Sakai have to drop Holidead, allowing Rosa to take over. Back in and a kick to the back has Rayne in trouble and we take a break. We come back with Rayne hitting an enziguri but getting pulled down into a chinlock instead. That goes nowhere so Rayne is up with a spear, followed by another enziguri for two. Rosa hits a Gory Bomb for her own near fall but the reverse DDT gives Rayne the pin at 9:15.

Coast to Coast is back next week.

Feeling out process to start with Sabre taking over on the arm. Romero gets out with a dropkick to the floor but Sabre is back in to work on the leg. Make that the arm again as Sabre switches up in a hurry. Another dropkick gets Romero out of trouble again so this time Sabre goes after the neck as we take a break. Back with Sabre still toying with Romero and grabbing a crossarm choke.

Romero reverses into one of his own, followed by a tornado DDT for his first real offense. A springboard crossbody gives Romero two and there’s a kick to the face for a bonus. The forever lariats in the corner are countered into an STF but Sabre tries to make it a little too flashy and Romero makes it to the rope.

Sabre does his cocky kicks to the face so Romero takes him into the corner for a running knee to the ribs. A DDT gets two and Romero wins a slugout, followed by a running Sliced Bread for two more. The Sliced Bread in the corner is countered though and Sabre pulls him down into Hurrah! Another Year, Surely This One Will Be Better Than the Last; The Inexorable March of Progress Will Lead Us All To Happiness for the win at 13:44.

Result: Zack Sabre Jr. b. Rocky Romero – Hurrah! Another Year, Surely This One Will Be Better Than the Last; The Inexorable March of Progress Will Lead Us All To Happiness (13:44) 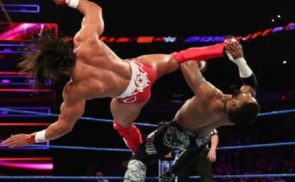 Rumor: This NXT Star Is Likely Moving Up To The Main Roster After WrestleMania