It’s the go home show for Final Battle and you never know what that means around this promotion. They might set up something for the pay per view but at the same time it might be any given show. Unfortunately it’s probably going to be two weeks at minimum before we get to any kind of follow up due to the annoying taping schedule. Let’s get to it.

We open with a recap of Kenny King vs. Caprice Coleman.

Silas Young is on commentary. King is defending but Coleman has the enforcer for hire Shane Taylor in his corner. The champ works on a hammerlock to start but it’s way too early for the Royal Flush. Back from a break with Coleman snapping him throat first across the top rope and grabbing a headscissors on the floor.

King gets sent hard into the corner for two and it’s off to something like a camel clutch/crossface chickenwing hybrid. A top rope hurricanrana doesn’t work though as King slips out, leaving Coleman to take a heck of a fall with his legs bouncing off the ropes. King gets two off a tabletop suplex but Coleman grabs his rolling northern lights suplexes for two more.

The Sky Splitter is good for the same but Coleman can’t hit a piledriver. Taylor finally gets involved with a distraction attempt, prompting the announcers to talk about King being on the Bachelor. Coleman’s rollup gets two but King is right back with the Royal Flush to retain at 10:05.

Post match Taylor and Punishment Martinez come in to beat King down but Young goes after both of them.

Here’s the Addiction to demand War Machine be fired for accidentally hitting a fan a few months back. Cue Hanson to go after both of them until a chair shot to the back takes him down. Hanson gets taped to the ropes and Daniels clips off a piece of his beard. Security comes in and Hanson gets free to clear things out.

Here are the Briscoe Brothers for a chat, though the fans aren’t exactly accepting of the heel turn. They’re here to tell it like it is and that includes saying they want Bully Ray and Tommy Dreamer. Jay talks about doing everything they can to get those two in the ring and they don’t know what else they can do.

Cue Bully and Dreamer but security quickly cuts them off. COO Joe Koff comes out to try and calm things down but the Briscoes say the ECW guys are taking orders from a short old man. Koff gets in the ring and yells at them, saying he’s the matchmaker around here. The Briscoes are disrespecting everyone around here so the match is on for Final Battle and it’s going to be hardcore. Bully and Dreamer get in for the brawl but security is on them.

Marty Scurll is on commentary. They go straight at it and head to the floor in the first few seconds. Lethal shrugs off some chops and throws Taven over the barricade, only to suplex him back to ringside. A top rope ax handle gives Lethal two back inside and there’s the cartwheel into the basement dropkick. Scurll rips on him for the theatrics but Cabana points out that Marty spins around before the chickenwing. Marty: “IT’S MOMENTUM!” Cabana: “FOR A CHICKENWING???”

Jay’s Figure Four is countered into a small package for two but Lethal clotheslines him to the floor. That means a suicide dive but Jay stops at one for a change of pace. Taven gets in a dive of his own though and we take a break. Back with Taven getting two off a flip neckbreaker but hitting knees on a Lionsault attempt.

A slow slugout goes to Lethal and now the Figure Four goes on. The Kingdom helps Taven get to the ropes and Marty freaks out on Cabana for some reason. Hail to the King gets two as Marty goes to ringside. He throws the umbrella in but Lethal’s not sure. The delay allows Taven to grab a rollup for the pin at 10:11.

It’s time for the contract signing between Cody and Dalton Castle. Cody, in a fur coat, and company, including Brandi Rhodes also in a fur coat, are in the ring but Castle gets an entrance. Castle says Cody looks ridiculous but Cody is too busy eating what appears to be meats and cheeses.

Cody and Brandi stop for some champagne until Castle talks about breaking Cody’s heart at Final Battle. He was excited when he heard Cody was coming because Cody loved wrestling as much as Castle does. Then Cody showed up and it was clear he was overdressed, overpaid and overrated. Both guys sign and they stare each other down to end the show. 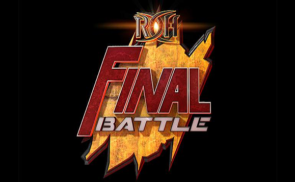