It’s the go home show for Clash of Champions 2017 and for once that might mean something around here. The recent change towards having Smackdown clips as well as Raw stuff is a nice idea and that’s a very cool thing for the time being. Maybe we can even build towards the pay per view a bit. Let’s get to it.

Feeling out process to start until Rhyno scores with some chops and an elbow. Hawkins is right back with a clothesline for two but stops to pose. Nigel isn’t pleased with Hawkins’ offensive choices and we hit the chinlock. Rhyno fights up without much effort and runs Hawkins over again. The spinebuster is good for the pin on Hawkins at 5:04.

Reigns is defending and starts fast with uppercuts and clotheslines. They fight to the floor and we take an early break. Back with Cesaro cranking on the arm after swinging it into the barricade for a sick thud during the commercial. Reigns fights out with a backslide for two, followed by a rollup. That’s reversed into a Fujiwara armbar and then a regular armbar. Reigns fights up again and hits the apron kick to the face for two, only to get pulled into a Crossface.

Reigns reverses into a Samoan drop for two, only to be sent HARD into the post. It doesn’t seem to matter that much though as Reigns scores with a Superman punch off the apron. The arm won’t let him follow up properly though, allowing Cesaro to grab another Crossface. The Swing is reversed into a sitout powerbomb for two more but Reigns can’t follow up. Cesaro slugs away in the corner but the Neutralizer is countered with a backdrop, followed by the spear to retain the title at 16:53.

They beat the heck out of each other. 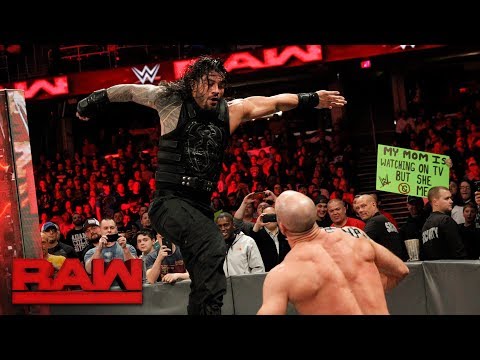 Video on Strowman vs. Kane.

The winner gets Lesnar at the Rumble. Strowman wastes no time by splashing Kane in the corner, followed by a running dropkick for one. Kane avoids a charge though and a chokeslam gets two. Another chokeslam gets the same before Strowman chokeslams Kane for good measure. They fight into the crowd and Strowman spears Kane through the barricade for a double countout at 4:31.

Result: Kane vs. Braun Strowman went to a double countout (4:31)

The fight continues post match with both guys picking up steps. Said steps are rammed together with Strowman getting the better of it but he can’t crush Kane’s throat again. Kane chairs Strowman in the knee and then the back, finally taking the monster down. Kane sets up a table but a double clothesline gives us a double situp. Strowman muscles him up for the powerslam through the table to end the show.

There were some good fights on Monday. 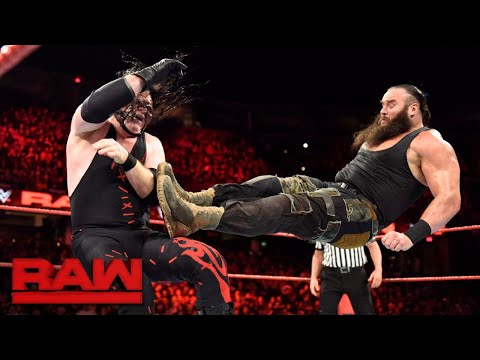 Video on the Riott Squad wrecking the Smackdown women’s division.

Gallagher and Tozawa get things going with Jack doing his headstand in the corner and jumping over a charging Tozawa. It’s quickly off to Metalik vs. Kendrick with the masked man speeding things up, including a rope walk middle rope dropkick. Kendrick hits a super atomic drop of all things and we take a break. Back with the Metalik Driver getting two with Kendrick grabbing a Captain’s Hook for the save. Everything breaks down and Metalik drops a rope walk elbow for the pin on Kendrick at 7:10.

Here’s Styles to open things up. He won the title a little over a month ago and wants to be a fighting champion. This Sunday he defends against Mahal and lists off what Mahal will do to get the title back, including bringing in Great Khali. Cue the Singh Brothers, who say they’re not introducing Mahal tonight. We look back at Mahal attacking the two of them two weeks ago so AJ wants to hug it out. AJ: “Come hug it out with Uncle Al!”

The Brothers get in the ring and say they want to be in Mahal’s corner on Sunday. One of them rants about how horrible Mahal is (“He thinks we’re twins!”) while the other tries to calm him down. AJ doesn’t buy it and shows a still of the Brothers being in Mahal’s corner this weekend in India. They swear they’re done with Mahal, who comes out looking rather angry. AJ of course doesn’t buy any of this and lays the Brothers out.

At least it’s almost over. 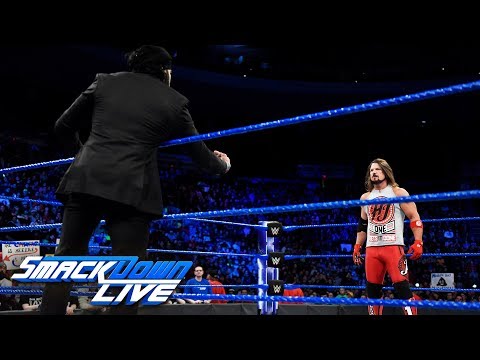 And we’ll wrap it up with more Smackdown.

Bryan is on commentary to continue a trend tonight. Owens grabs a headlock for a bit before getting kicked in the chest for his efforts. A knee to the ribs cuts Nakamura down though and a backsplash gets two. We hit the chinlock as Bryan talks about how Shane’s stipulations aren’t exactly fair. Nakamura fights up but can’t hit the knee in the corner. Instead he gets sent hard into the barricade as we take a break.

Back with Owens stomping away until Nakamura gets in a running kick to the face. Some YES Kicks have Owens in more trouble and there’s Good Vibrations for a bonus. The running knee in the corner gets two but Owens breaks up a superplex. His Swanton hits knees but Owens blocks the reverse exploder. The referee gets bumped and Bryan takes over instead. Nakamura’s spinning kick to the head gets a delayed two as Orton and Zayn get in a fight. The distraction lets Owens hit a Pop Up Powerbomb for the pin at 14:29.

Kevin and Sami say no one is taking their careers away because they’ll win at the Clash.

Villains can be fun too. 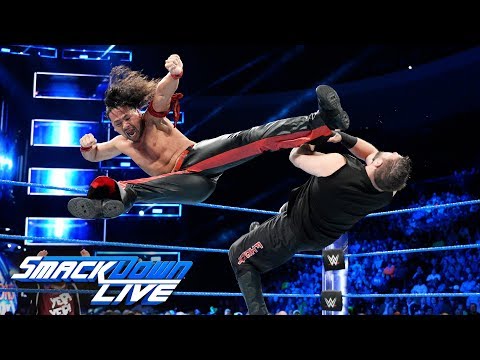 Remember to follow me on Twitter @kbreviews and pick up the Monday Nitro and Thunder Reviews Volume VI: July – December 1999 in e-book or paperback. Check out the information here: 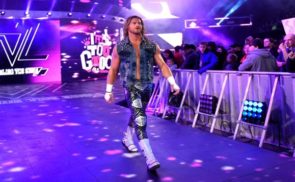 Dolph Ziggler Discusses His “Downward Spiral” In WWE and Future