We’re still in the middle of the Women’s Title tournament and the results have been hit and miss so far. As tends to be the case in a tournament with a bunch of unknowns, some of the matches have outshone the others, there have been a few that didn’t exactly offer much. Let’s get to it.

We open with a recap of some previous round matches.

Holidead talks rather fast and seems angry about a lot of things.

Max the Impaler is the next monster heel and has Amy Rose in her corner to promise violence in destruction.

Women’s Title Tournament First Round: Max the Impaler vs. Holidead

Holidead crawls around and shouts a lot to start and they trade some forearms to the face. Max shrugs off some clotheslines in the corner and sends Holidead flying. Holidead manages a slam but Max does the Undertaker situp to freak her out. A big charge drives Holidead into the corner and Max sits on her back. Back up and Holidead misses a charge into the post to make it even worse for herself.

Max tosses her with a suplex and we take a break. Back with Holidead elbowing her way out of a fireman’s carry and grabbing a DDT. This time it’s Max missing a charge into the post and getting caught in a release German suplex. Holidead hits a suicide dive to the floor but Max backdrops her way out of Darkness Falls. Instead Holidead settles for a spinebuster but misses a guillotine legdrop. An over the shoulder backbreaker finishes Holidead at 9:18.

Result: Max The Impaler b. Holidead – Over the shoulder backbreaker (9:18)

Video on Matt Taven vs. Vincent.  Taven about how Vincent has ruined his life but now he wants the World Title match.

Champions vs. All Stars

Bandido’s World Title still says Rush because he wants people to know who he beat to win it. We get a cool shot of all the titles on a table as Woods and Gresham go technical to start. Neither is getting anywhere and there seems to be some respect being shown here. Gresham wants Jay Briscoe but Dickinson tags himself in instead.

They hit the mat with Woods blocking a kneebar and shoving Dickinson down in a bit of a power display. Mark comes in to face Lee, which could be a bit interesting. With Flip standing on the floor, Mark unloads in the corner and shouts a lot but it’s off to EC3 to drop Lee with a neckbreaker. Flip tags himself in for a standing moonsault and we take a break.

Back with Dickinson elbowing Flip in the face for two but a clothesline allows the tag back to Woods. Homicide is fine enough to come in and take Woods out, setting up the Homicide/Dickinson vs. Briscoes slugout. We settle down to Woods and Gresham going amateur but it’s back to EC3 for a suplex to Gresham. The Briscoes start taking over on Gresham but Flip tags himself in again.

Gresham gets in a leapfrog, sending EC3 into Flip for a crash. Bandido gets the hot tag and everything breaks down in a hurry. Bandido and Rush hit stereo suicide dives onto Woods and Gordon and it’s time for the parade of kicks to the face. Gordon rolls Homicide up but runs into an overhead belly to belly. The 187 is blocked and Flip Five gives Flip two but a Paul Orndorff style piledriver gives Flip the pin on Homicide at 13:29.

We run down the Glory By Honor card (both nights) to end the show. 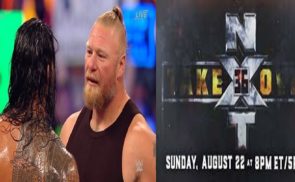