Then everything changed. CM Punk made his, ahem, surprise debut last week on Rampage in what might be the greatest moment AEW has had in its history. Other than that….I mean does anything else really matter? All Out is in a week and a half and most of the card seems to be set but there are still some spots available. Let’s get to it.

We get a quick clip from Punk’s debut on Rampage.

No seconds here for a change. We open with the DELETE vs. lazy kicks, which I think we’ve seen before. Matt breaks up the lazy superkick though and reaches into his own pockets to pull out money. Cassidy hits the dropkick into the nipup, complete with hands in his pockets. Then he picks up the money and put it into his pocket. Well some of it at least, as he would rather dive onto Matt, who catches him with the Side Effect on the floor.

Cassidy’s ribs are wrapped around the post and it’s back inside (with a bunch of money on the mat) for some belly to back suplexes. Matt stops to pick up a bunch of money and even steals the money back from Cassidy. Back up and Cassidy tries to fight back but Beach Break is countered into a nasty Splash Mountain for two. The Twist of Fate is blocked though and Cassidy takes him down.

A high crossbody lands on Hardy’s face and Hardy is busted open. Cassidy goes up, hits the Jeff Hardy pose, and puts his hands in his pockets for the Swanton. Hardy blocks a Twist of Fate and a top rope elbow hits Cassidy’s back again. Then Cassidy grabs his own Twist of Fate for two as Matt’s blood is all over Cassidy. Hardy tries a guillotine choke but Cassidy reverses into a cradle with his hands in the pockets for the pin at 10:08.

Aleister Black is ready to destroy Arn Anderson’s son, plus the rest of the Nightmare Family.

Here is Chris Jericho to talk about tapping out to MJF last week. Jericho talks about the Labors of Jericho and how he came up short in the grand finale. It has become a mantra for him: “BEAT MJF! BEAT MJF! BEAT MJF!” Jericho has an idea for a final match between them but MJF won’t come out. His idea is one more match at All Out, where he will put his career on the line.

Cue MJF with a “MJF – 3, Jeriblow – 0” shirt, to say this is getting a little embarrassing. He knows Jericho needed a rub from the fastest rising star in the history of professional wrestling, but the cash cow’s udders are sore. Last week, MJF made him tap out faster than someone listening to a Fozzy CD, but the idea of Jericho never wrestling again is too much to pass up so the match is on.

The Varsity Blonds say they’re a real family and they’re ready to beat the Lucha Bros.

Julia Hart is here with the Blonds and the Elite comes out to watch. Garrison can’t get very far with Fenix so it’s off to Pillman to superkick Penta. A running hurricanrana takes Penta down but he is right back with a Sling Blade. Back from a break with Penta taking down both Blonds and handing it back to Fenix for a bunch of kicks.

The rolling cutter gets two on Pillman and everything breaks down, including Fenix hitting a very fast suicide dive onto the Blonds. Back in and Pillman hits a heck of a powerbomb for two on Fenix. Garrison adds a springboard elbow but Penta makes the save this time. The Bros send Garrison outside and it’s an assisted Fear Factor for the pin at 8:23.

Post match Jurassic Express joins the Lucha Bros in the ring. The Elite tries to come I and are knocked off the apron in a hurry.

Video on Pac vs. Andrade.

All Out rundown, now including Britt Baker defending the Women’s Title against Kris Statlander.

Hayter has Britt Baker and Rebel in her corner. Hayter wastes no time in throwing Velvet into the corner for the choking. Velvet manages to send her to the floor for back to back suicide dives. A hard posting drops Velvet and Baker gets in a few cheap shots as we take a break. Back with Velvet winning a slugout and hitting a running elbow against the ropes. Some running knees connect on the ropes but Baker offers a distraction, allowing Hayter to hit a hard lariat for the pin at 6:53.

Post match the beatdown is on but Kris Statlander makes the save.

The Dark Order doesn’t seem to be on the same page over, uh, Page. Alex Reynolds doesn’t like what Evil Uno has been saying and walks out, with John Silver going with him. Uno tries to apologize but the rest of the team isn’t thrilled either.

Tony Schiavone brings out CM Punk for a chat. Punk is asked what one thing brought him back to wrestling, but Punk can’t hear over all of the people. Punk lists off some of the younger wrestlers who he wants to face, but there is one guy who has gotten his attention first. He’s going to retire the nickname Voice of the Voiceless because there are people who have a voice and there are people who listen.

Punk has been looking at someone like Darby Allin who looks like he is willing to kill himself. There are people asking if Punk can still go and if he still has it to be the best in the world. He looks at Allin and sees someone who would have been Punk’s favorite wrestler at 15 years old. Allin isn’t the biggest or the strongest but he has heart. Can Punk still do it? Fans: “YES! YES! YES!” Punk: “That’s someone else’s thing and you just have to wait a little longer.” He’ll see Allin in Chicago and loves his wife April. Punk gets a very strong sendoff.

Miro talks about how he will forgive Fuego del Sol but he is going to drag Eddie Kingston under the water because he is the Redeemer. Bring him the Mad King before he burns this place to the ground.

Sting and Peter Avalon are here too. Allin chokes the much bigger JD Drake to start and sends him outside. The big dive has to be canceled so Ryan Nemeth swivels his hips at Kingston. A single chop gets rid of him so Cezar Bononi comes in to shrug off Kingston’s chops. Moxley tags himself in and a double shoulder clears the ring.

We take a break and come back with Moxley suplexing Bononi and it’s Kingston coming in to strike away on Drake. Moxley has to save Kingston from a Vader Bomb with a bite to Drake’s face, allowing Allin to hit a super Code Red. Avalon gets beaten up on the floor as Nemeth tries to bring in a chair. That goes horrible, and it’s a flipping Stunner into the Coffin Drop to finish Drake at 7:40.

Post match everyone else is brawling on the floor so here is Daniel Garcia to jump Allin from behind.

Tay Conti is ready for the Casino Battle Royal but the Bunny comes in to offer her a spot in the Hardy Family Office. The contract is ripped up with a NO and the fight is on.

FTR wants one more match with Santana and Ortiz.

Here is the Elite to promise to take out Christian Cage. Cue Cage, to show a video of Don Callis hyping up the ten year old Kenny Omega, which is why he fired Christian. Back in the ring, Omesa says that makes him like Vince McMahon, Verne Gagne or Eddie Graham, but this isn’t Greg Gagne or Eric Watts. Christian accuses Callis of manipulating Omega, who asks Christian “You think you know me?” Callis takes off his pink suit and the group beatdown is on until Frankie Kazarian runs in for the save with a lead pipe.

Jon Moxley sent a contract to New Japan and got it sent back with one signature. Satoshi Kojima has signed the deal and Moxley is ready to send him out in a blaze of glory. Moxley wants to do some horrible things to Kojima and he’ll see him at All Out.

Gunn Club vs. The Factory

Paul Wight is on commentary. Comoroto gets sent outside to start and it’s off to Solow, who gets taken down by Austin. Marshall gets in a cheap shot though and we take a break. Back with Colton coming in to clean house as everything breaks down. Marshall stops to yell at Wight though and the distraction lets Colton grab the small package win at 5:51.

Result: Gunn Club b. The Factory – Small package to Marshall (5:51)

Dan Lambert, with the Men of the Year, rants about wrestling fans being soft and how they all want their safe spaces. Those people need to believe in men like these two, and there may be hope for them yet.

Arn Anderson knows that his son Brock is in over his head and he’s probably going to lose to Malaki Black. He’ll be there with his son though.

Brock takes him down and hammers away but Black unloads with strikes in the corner. Hold on though as Black yells at Arn, allowing Brock to get in a few shots to the leg. That earns Brock a suplex and Black Mass, making Arn cringe. The delayed pin finishes Brock at 2:29.

Post match Arn comes in to check on Brock but Black has a chair. Arn is ready to fight and blocks a kick to the head. He can’t block a low blow though and then the kick to the head drops Arn. Lee Johnson runs in for the save to end the show. 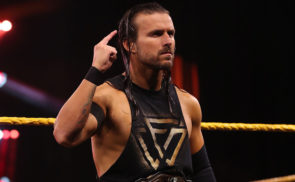