Maybe he’s up next. Titles are one of the easiest concepts to understand in wrestling. Someone has a championship belt and someone else wants it. That is all you need to carry a feud in a lot of cases and that is certainly the case in WWE. These feuds can be set up in a variety of ways and that might have happened again with one of the most historically important titles in WWE history.

Last week on SmackDown, WWE Intercontinental Champion Ricochet was defeated by both members of Los Lotharios, setting up a title match on next week’s show. Over the weekend, Xavier Woods tweeted that he would win the title later in the year. Ricochet responded to Woods, saying that after he gets done with Los Lotharios, he would be glad to “smack you up”. Woods defeated Ricochet in the first round of the 2021 King of the Ring, which Ricochet referenced in his response. While not confirmed, this could suggest that Woods will be a future challenger for the title.

Back to settle a score, then it’s time to get to work.

In 2022 your king will become Intercontinental Champion. pic.twitter.com/P8kSOYwLOh

X, you can step in line behind the two kissin cousin bozos.

Then after I’m finished with them, I’ll be MORE than glad to smack you up after what happened at KOTR. ? https://t.co/DC6Ls2PoAO

Opinion: This is something that would make all the sense in the world and be a nice boost for the title. The championship, as well as WWE, can use some fresh blood and Woods going after the championship would hardly be a stretch. It would make for a good story and the fans would be behind Woods trying to win his first singles championship (that isn’t in the form of a crown). Take a chance and see what happens.

What do you think of the challenge? Will the match take place? Let us know in the comments below. 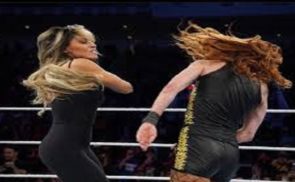 WATCH: Trish Stratus And Becky Lynch Get Into It At WWE Live Event 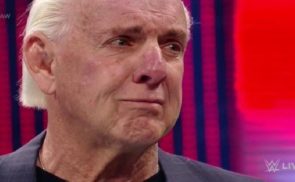