That’s quite the shot. Wrestlers can come in all different shapes and sizes, meaning that they are going to wrestle all kinds of styles. It makes sense for wrestlers with different physical abilities to wrestle in different ways, as it makes sense to play to your strengths. However, the wrestlers also have to keep their opponents safe, which led one legend to criticize another.

WWE Hall of Fame Bret Hart took part in a virtual signing for Signed By Superstars. During the signing, Hart mentioned that his niece Natalya had told him that Brock Lesnar saw Hart as his dream opponent. Hart responded by saying that he had always heard Lesnar was a good worker who looked stiff but took care of his opponents, unlike Goldberg. This is in reference to Goldberg superkicking Hart at Starrcade 1999, causing an injury which led to Hart’s retirement from the ring soon thereafter. Neither Goldberg nor Lesnar have responded to the statements.

Opinion: I know it is has been over twenty years but I can understand Hart’s stance on Goldberg. Goldberg has a bit of a reputation for not being safe in the ring and Hart is someone who took pride in being considered safe with his opponents. It is horrible to have the decision to end your career on your own terms taken away from you, and Hard is unhappy with who caused it as a result.

What do you think of Hart’s comments? How would a Hart vs. Lesnar match have gone? Let us know in the comments below. 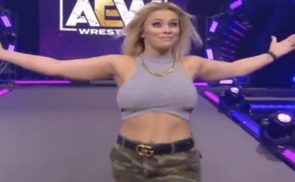