It’s a pretty special day and that means NXT UK is smart enough to know better than to try and run a regular show. Just like we had for months earlier this year, it’s a Best Of show and that’s the best option that they have. There are still some great matches to pick from and that is our Christmas present around here. Let’s get to it.

Andy is in a light up Roddy Piper sweater. We aren’t wasting time as it’s off to our first match.

That would be Pete Dunne/Matt Riddle. Dunne and Andrews start but it’s a very early standoff to send us to a break. Back with Webster flipping out of Dunne’s German suplex but getting caught in a quick X Plex. Webster fights out of the corner, flips over Dunne and crawls underneath Riddle to get over to Andrews. The pace picks up with Andrews doing the double knee slide and backflipping into a double Pele.

Andrews and Webster hit the stereo flip dives, followed by the assisted 450 for two on Dunne back inside. Dunne punches Webster out of the air but Andres is there to break up….well there wouldn’t have been a tag anyway as Riddle was pulling himself back to the apron. A double stomp to the hands allows Riddle to come in and stereo kicks to the head get two on Andrews.

Riddle German suplexes Andrews for two and Dunne grabs an ankle lock to mix things up a bit. Andrews rolls out and hits a double stomp as we take another break. Back with Webster dropkicking Dunne to the floor, setting up the big flip dive onto both of them. Andrews hits a reverse hurricanrana for two on Riddle with Dunne having to shove Webster into the cover for the save. A tornado DDT plants Dunne on the floor but Riddle spears Webster down.

Riddle’s suplex is countered into a small package for two so Riddle throws him into a kick from Dunne for a closer near fall. Andrews grabs a hurricanrana for two on Riddle with Dunne punching Webster into the cover for another save. The Bitter End is blocked and the X Plex is countered into a Stundog Millionaire. Riddle has had it with these two and gives Webster Bro Derek on the floor. Dunne loads up the Bitter End on Andrews, dropping him onto Riddle’s knee to the face for the pin at 18:20.

Jinny talks about what a year this was and thinks we should look back out our accomplishments. NXT UK showed the world how tough it was, but she showed everyone how great she was. 2021 is a new, clean slate and it will be her year. Merry Christmas.

Video on Walter vs. Joe Coffey at Takeover: Blackpool II.

Walter is defending and tries a big boot at the bell in a flashback to last year’s Blackpool. The early sleeper is countered into a spinning belly to back suplex so Walter gets a breather on the floor. Coffey follows and hits a big diving shoulder over the barricade as Walter can’t get going so far. Back in and Coffey stomps away, setting up a belly to belly for two. There’s a tornado DDT for two more and it’s time for the slugout, with Coffey seemingly rather pleased. A stalling suplex gives Coffey two more but they chop it out, and that’s just a bad idea against Walter.

Some big chops put Coffey on the floor and that means a big boot against the barricade. Back in and a half crab into the STF have Coffey in more trouble but Walter lets it go. More forearms just fire Coffey up…so Walter knocks him right back down. Some forearms to the chest set up a Boston crab and then a modified Crossface has Coffey in more trouble. A rope is grabbed so they ram into each other a few times until Walter suplexes him for two more.

The sleeper is broken up with a drop backwards and they’re both down. That doesn’t last long as Coffey spears Walter in the back to set up a German suplex for two. Walter is right back up with a powerbomb for his own near fall but the ref gets knocked VERY silly.

All The Best For The Bells connects for no count so here’s Alexander Wolfe to go after Coffey. Ilja Dragunov makes the save but knocks Wolfe into Coffey’s leg. Walter clotheslines Dragunov to the floor and kicks him down before sending Coffey into the steps. We have another referee as Dragunov and Wolfe fight to the back. Coffey catches him on top and manages a belly to belly superplex to put them both down again.

Walter is up first for his awesome top rope splash and another near fall. The powerbomb is escaped and All The Best For The Bells connects (after the first one grazed the top of Walter’s head) for two so Walter slaps on a sleeper. The sleeper suplex drops Coffey on his head and there’s the powerbomb. Walter hits another powerbomb and puts on the Crossface to make Coffey tap at 27:40. 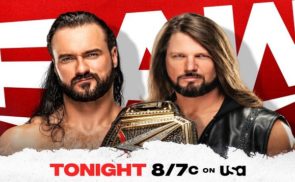 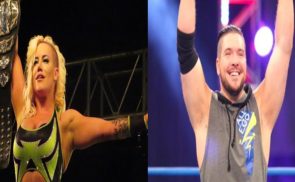