We are past Prelude, which is probably the biggest NXT UK show in over a year. That is quite the nice feeling, as NXT UK knew how to put together some big cards and they pulled it off again last week. Now it is time to see how they follow up on things, which tends to be a lot more difficult than it seems. Let’s get to it.

We open with a look at NXT UK’s involvement during Wrestlemania week, including at Prelude, Takeover and Wrestlemania.

Huxley doesn’t get his own entrance so he throws Frazier around to burn off some anger. A chop into a headlock doesn’t get Frazier very far but thankfully we have commentary explaining what both of them need to do to win. Huxley launches him into the corner again and hits a stomp out of the Tree of Woe.

Some more tosses have Frazier in trouble but he is back with a dropkick to the knee. Huxley doesn’t seem to mind and runs Frazier down again, setting up a chinlock with a knee in the back. Frazier fights out of the corner though and hits a crossbody. That’s enough to send Huxley outside and there’s a big suicide dive. Back in and a missile dropkick into the frog splash finishes Huxley at 6:05.

Sha Samuels gets annoyed at Noam Dar being asked how he is feeling after his #1 contenders match for the Heritage Cup. Dar says it’s cool, because the two of them are facing Moustache Mountain next week.

It’s time for Supernova Sessions with Noam Dar bringing out Gallus as his guests. Dar wants to talk about vacations but Mark Coffey talks about the training they have been undergoing to get back to the top because they are held to a higher standard. Cue Eddie Dennis, who doesn’t seem to think much of that idea. The brawl is on with the Hunt joining in until referees break it up.

Moustache Mountain is ready for Noam Dar and Sha Samuels next week.

They fight over a lockup to start with McKenzie grabbing a headlock. With that broken up, McKenzie goes with a fisherman’s neckbreaker for an early two instead. That earns her a backdrop driver to give Dawn her own two and a knee to the ribs drops McKenzie again. A standing double arm crank has McKenzie yelling a lot but she’s back out with a dropkick to the knee. McKenzie gets two off a spear so Dawn grabs a fisherman’s suplex for the same. A boot to the face out of the corner rocks McKenzie again and a half nelson suplex finishes her off at 5:33.

Jinny, with Joseph Conners, is ready to turn Dani Luna into a fashion victim next week.

We look at Aoife Valkyrie staring down Meiko Satomura for a challenge.

This is Starz’s first match under the tutelage of Piper Niven, who is here in his corner. Starz charges at him to start and gets thrown down without much trouble. A gutwrench has Smith in more control and a running shoulder sends Starz into the corner. Smith’s armbar puts Starz in trouble and a running knee to the ribs cuts him off again. Starz slips out of a suplex though and hammers away, only to get knocked outside in a hurry. Niven has to help him back inside where Starz wins a battle of an uppercut and hits a flying shoulder. What looks to be Deep Six from Smith is countered into a rollup to give Starz the pin at 6:01.

Video on Kenny Williams turning on Amir Jordan to split up the team and set up this week’s main event.

Jordan charges in and starts hammering away in a hurry. They’re on the floor in a hurry with Jordan avoiding a running knee, which goes into the steps instead of him. Back in and Williams cuts him off for a change and kicks away at Jordan’s head. A crash down onto Jordan’s back lets Williams crank on his arm and a quick suplex gets two. There’s a back rake into another armbar to make Jordan scream a lot.

Jordan breaks up a superplex though and hits a missile dropkick to take over. The Swanton is good for two but Williams slips out of an electric chair. An enziguri sends Williams into the ropes but he bounds back with the rebound lariat for a double knockdown. Back up and Williams wins a slugout and goes to remove the turnbuckle pad, allowing Jordan to come back with a superkick. Williams knocked into the corner where he pulls off the middle pad, allowing the bulldog driver to finish Jordan at 11:34. 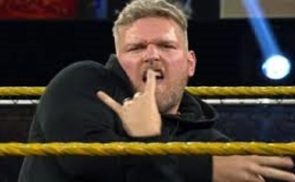