KB’s Review: It Was A Thing

For those of you who follow my reviews (thank you), you might be aware that I go a little bit nuts during WrestleMania week. This year I had 24 shows scheduled over 6 days and I wound up covering the majority of those (with the rest of them to come). I don’t usually do something like this, but it’s a special time of the year and worth the extra time, money and effort. You don’t get to do this very often, but it is one of my favorite traditions. This time around though, WWE left out a pretty big part. Join me if your will on a little trip to…Christmastime.

One of my favorite Christmas movies is National Lampoon’s Christmas Vacation. It might be a bit filthy at times, but it is one of the funniest takes on Christmas traditions you’ll ever see (despite Christmas not actually taking place during the movie). One of the main plot points of the movie is Clark Griswald wanting to put in a pool with the money he receives as his Christmas bonus. Days go by without the bonus showing up but the letter eventually arrives….and it’s a subscription to the Jelly of the Month Club (the gift that keeps on giving all year).

After Griswald’s brother kidnaps his boss (don’t ask), Griswald goes into a rather good speech about how it’s fine to not give a Christmas bonus if you don’t want to, but don’t have people who expect one sitting around waiting on it if you know it isn’t coming. That’s a completely fair point, as the bonus had been a regular thing for fifteen years. It is not unreasonable to think that it is coming again and someone not receiving it when they have grown to expect it is going to cause some issues. And now, back to wrestling.

WrestleMania is the big culmination of the year for WWE, with the most important night (er, nights this time) they have. Everything matters at that show and it is more or less the season finale. After the show is over, WWE regularly throws a big party for the employees as a celebration/thank you of what they have done. That is a special time and the fans get their own version of it as well. Or at least they expected to.

The Monday Night Raw after WrestleMania is not like any other show of the year and for a time, a case could be made that it was the second biggest event the company ran each year, including pay per views. It is basically a huge party, with the wrestling mostly being background noise for big angles, stories, returns, departures and almost any other thing you can think of. That is a special kind of show and something you do not get any other time. We didn’t get it this year either.

This year’s post WrestleMania Monday Night Raw could have passed for just about any other time of year. There were three moments that might be classified as important: Ivar returned from his neck injury (that’s a great thing to see), Charlotte returning (after being gone five weeks) and cutting the same promo she has cut for years and Mace/T-Bar attacking Drew McIntyre, suggesting that they had joined the Hurt Business.

No really that’s it. One half of a tag team returned from injury, Charlotte kind of returned and a couple of guys who have been treated as losers are the new lackeys for a team who just got rid of better lackeys a few weeks ago. No big matches (or at least nothing we hadn’t seen done better the day before), no debuts, three of the four new Raw champions crowned at WrestleMania didn’t even appear, and no special appearances. Oh wait one more thing: the announce team was changed. That counts right?

Now yes, it is true that this is a unique situation and WWE can’t do their usual post Monday Night Raw show. That’s fine and good, because there are things that are beyond their control at the moment. However, they could have done SOMETHING. Anything. Have some NXT wrestlers pop in, announce something for later, have someone show up as a surprise, present some kind of special match. Just do SOMETHING to acknowledge that we are in a different kind of show.

The problem here is that WWE has officially made the Monday Night Raw after WrestleMania a thing. Going all the way back to 1995 (Sid turns on Shawn Michaels), there have been big moments on the post WrestleMania show almost every year. There have been debuts (Mankind in 1996 and Brock Lesnar in 2002), new groups forming (new DX in 1998 and the Two Man Power Trip in 2001), major angles (Dolph Ziggler cashes in Money in the Bank in 2013, the Shield turns face in 2014 and Brock Lesnar gets suspended in 2015) and more, including things like returns, the stupid beach balls, the chanting and more.

The show is so infamous that WWE would have the announcers give something like a disclaimer at the beginning of the night. They would tell you that this is not going to be like other nights and that the crowd is going to be all over the place. This show is so well known and promoted by WWE that they released a nine hour DVD called “WrestleMania Monday”, looking back at the history, including a documentary on the show itself. There is no hiding this: WWE is acknowledging, advancing and profiting off of the idea that this show is something different.

As someone who has been in those crowds, I can guarantee you there is no experience like it in wrestling. You spend the entire show wondering what you are going to see and knowing that almost no match is going to matter because the angle or event is coming a lot sooner than you would expect. That is an awesome feeling because the atmosphere makes you wonder what is going to happen. In a company that is considered boring a lot of the time, it means a lot to have that one night where you know that something is going to be different.

Well forget that this year (and probably a few more years prior) because WWE has decided that this needs to be a regular, traditional, run of the mill Monday Night Raw with nothing that has anything resembling the hype and interest and style that the show has had for years. This week’s show felt like absolutely nothing important and there was nothing that made me want to come back again the next night, let alone the following night for NXT or for that Friday for SmackDown.

This is what WWE is about these days, at least with these show. They don’t seem interested in trying something that might feel important or special because that isn’t what this show is about anymore. I’m not sure why they would want to do that save for little more than their obsession with controlling everything, but it really feels like wasting something that has been a great tradition to them for the better part of the last twenty five years.

WWE had more momentum coming into this week’s Monday Night Raw than they have had in over a year and they wasted it. I had a great time with WrestleMania this weekend and then I was miserable the next night. That is how WWE decided to proceed and it was one of the worst things I have ever seen them do. This was a thing, and it was a terrible one. 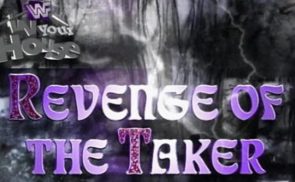 REVIEW: In Your House #14: Revenge Of The Taker: The Wild One