We’re coming up on Halloween Havoc near the end of the month and the card seems to be set. They still have a few things that need to be done to get ready for the show though and we will probably get some more of that build this week. We also have some guest stars coming in this week from Smackdown so things should be feeling bigger. Let’s get to it.

Here is Pretty Deadly, dressed as very stereotypical British men (complete with red robes and powdered wigs), for a state of the Commonwealth address. They talk about how back in the day, some pilgrims came from the United Kingdom (Prince: “Hello.”) and now as a result, they are here. All of the other teams have been training in the Performance Center to be as good as they are, including the Boring Brothers and Cheap Denim. Therefore, they should be the Tag Team Champions for all time!  Cue the Brawling Brutes, who are tired of how Pretty Deadly have been complaining everywhere. Pretty Deadly claims they were hacked (By Kevin Nash! Kevin Patrick! Kevin Owens!) but get cleared out anyway.

Earlier today, Alba Fyre attacked Toxic Attraction so the six woman tag is off for tonight, with Fyre and Mandy Rose taken out.

Trick Williams is here with Hayes. Mensah snaps off a suplex to start and they head outside. Hayes gets in a cheap shot to take over and chops Mensah down back inside. Back up and Mensah kicks away, including a shot to the head to knock Hayes away. A missed charge slows Mensah down though and the top rope ax kick finishes for Hayes at 5:30.

Brutus Creed isn’t cleared to compete because of his shoulder. Duke Hudson comes in to laugh at him and gets a match with Julius Creed as a result.

Carmelo Hayes is on commentary. Wagner throws him around with the straight power to start but Chase is back with some right hands. Mr. Stone offers a distraction but gets taken down by Thea Hail. Chase grabs a rollup for two but gets caught with a Death Valley Bomb for the pin at 3:31.

Sanga wishes Nathan Frazer luck in his qualifying match. With Frazer gone, Veer Mahaan comes in to stare at Sanga.

Grayson Waller has his security ready to deal with Apollo Crews’ visions.

Choo goes after her to start and they head outside, where Legend spins her into a backbreaker. Back in and a side slam gives Legend two but she misses an elbow, allowing Choo to strike away. Some more kicks put Legend down and Choo’s top rope Vader Bomb is good for the pin at 3:46.

Wes Lee is ready for Halloween Havoc but wants Grayson Waller first. He’ll have to settle for a match with an invading Stacks.

Gallus promises to be back and they’re coming for Bron Breakker.

Kayden Carter and Katana Chance know they are different but they work great together.

For a future Women’s Tag Team Title shot. Lyons powers Dolin into the corner to start so it’s off to Stark vs. Jayne. Stark knocks her outside without much trouble so Dolin comes back in, earning a springboard spinning crossbody. Toxic Attraction is sent outside for a breather and we take a break.

Back with Lyons in trouble but she kicks her way to freedom. The hot tag brings in Stark to go after Dolin. A superkick into a German suplex gets two on Dolin as everything breaks down. Jayne gets to clean house for a change but she walks into the flipping knee from Stark. The splits splash finishes for Lyons at 10:23.

Ilja Dragunov is ready to get some more gold because he fought so hard to become champion and then never lost it. He’s ready for JD McDonagh and Bron Breakker if that is what it takes to get back where he wants to be. Dragunov continues to feel like a star.

It’s time for the Grayson Waller Effect with Cora Jade and Roxanne Perez. They talk about how they want to fight each other, with Perez saying they wanted to come into WWE together and be what the Four Horsewomen were to them. Jade accuses her of showing her true colors but Waller interrupts to reveal that in two weeks, they are going to get to pick your poison, meaning select each others’ opponents. Oh and their Halloween Havoc match is going to be Spin The Wheel, Make The Deal.

Waller even goes up to the stage to spin the wheel, comes up on Weapons Wild (sounds street fightish). The women fight in the ring so Waller comes back, only to be pulled underneath by Apollo Crews. Waller comes out and yes his eyes are red like in Crews’ vision last week.

The Schism yells at an unseen member of the team in a red hoodie. The person failed at their mission and need to be better.

Creed knocks him down, grabs a suplex and hits the basement clothesline for the pin at 48 seconds.

Post match Brutus Creed comes out and beats on Hudson as well. Damon Kemp pops up on the platform to say it’s going to be different at Halloween Havoc. Kemp makes it simple: if Julius can beat him at Halloween Havoc, Brutus can get another match, with Brutus saying he just needs five minutes. Kemp says Brutus’ career is on the line at Halloween Havoc, which Brutus accepts on Julius’ behalf. Julius makes it even bigger by saying it’s an ambulance match. Kemp is in.

JD McDonagh is ready for Ilja Dragunov and Bron Breakker at Halloween Havoc.

Hank Walker’s security buddies fire him up. Quincy Elliott comes in to do the same and dancing ensues.

Axiom is ready to win his trilogy with Nathan Frazer.

Walker armdrags him down a few times but Quinn is back with some shots to the face. We hit the quickly broken chinlock so Walker can hit the Thesz press. Some right hands have Quinn in more trouble but that’s broken up. Quinn’s running fist finishes Walker at 2:10.

Post match the beating is on until Quincy Elliott, makes the save. And adds a spank to Walker.

Cameron Grimes comes up tot he red hoodied Schism person with a warning about Joe Gacy. Cue Schism to beat Grimes down and to praise the hoodied one for doing well. The person in the hoodie is officially on the team. No identity given.

Brooks Jensen/Josh Briggs and Malik Blade/Edris Enofe give the Brawling Brutes a pep talk but get in their own argument. The Brutes say either team can get a shot after they win the titles, but get serious.

Bron Breakker is ready for Halloween Havoc but Javier Bernal comes up to suggest it’s a bad idea. Oh and that Breakker isn’t very good. A match is set for next week.

The Brutes are challenging. Wilson hammers on Holland to start but can’t get him up for a suplex. A dropkick/butterfly suplex combination drops Wilson so Butch can come in to bend the fingers. Prince comes in and gets dropped with a clothesline, leaving Wilson to get caught with some Sheamus style forearms to the chest.

We take a break with the champs in trouble and come back with Butch fighting out of a chinlock but getting driven into the corner. Butch slips away again and makes the tag to Holland for the house cleaning. A powerbomb out of the corner gets two on Wilson and it’s back to Butch, who misses a running knee in the corner. Prince tosses Wilson at Butch for a Codebreaker with Holland having to make the save.

Everything breaks down again and Holland sends Prince outside, leaving Butch to try a cross armbreaker on Wilson. Prince makes the save by stacking Wilson up for two but Butch is back with the Bitter End. Prince puts a foot on the rope so Holland sends him outside. The kick to the head into the Northern Grit connects but here is Imperium for the distraction. Prince uses said distraction to send Butch into the apron and Spilled Milk retain the titles at 12:25.

The brawl continues on the floor and goes to the back to….not end the show as Edris Enofe/Malik Blade and Josh Briggs/Brooks Jensen come out to stare at the champs to end the show. 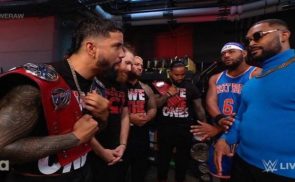