The new wave? Stables are a way for a wrestling promotion to put stars together in a group and see what they can do. It has long since been a way to make things less complicated and some of the more iconic moments in wrestling have something to do with a stable. This is still the case in modern times and we got a strange call back to one of them over the weekend at a WWE live event.

Over the weekend, WWE ran a live event in Bismarck, North Dakota. The show’s main event saw the Miz, Seth Rollins and Austin Theory team up against Kevin Owens, Dolph Ziggler and Bobby Lashley. During the match, Lashley was knocked down, leaving Rollins to lead his partners in the Shield’s fist pose. Lashley and company would come back to win the match, which served as the show’s main event.

Opinion: This is one of those things that is designed to pop the crowd and it seemed to have done its job. That is something that can be done at a live event without being part of some big story and that is where these shows can be fun. If nothing else, it fits for Rolling to think he could recreate the team with any other people, making it fun as well as logical for a nice combination.

What did you think of the idea? Which past stable should return to WWE? Let us know in the comments below.

AEW Star Hints At Wanting To Leave Company (And He Might!) 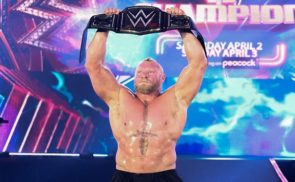 Speculation Over Surprising Name For Brock Lesnar’s Next Opponent