It’s the go home show for Takeover and that means we should be in for some nice final push segments towards the show. The card feels a little thrown together but that has never stopped NXT from making these things work before. If they do things right, we could be in for another classic. Let’s get to it.

Rematch from three weeks ago where Belair won. Mia dropkicks her to the floor early on and Bianca isn’t sure what to do. Back in and Bianca takes her down with a double leg but gets reversed so Mia can hammer away even more. A Cannonball in the corner keeps Bianca in trouble but she comes back with a kick to the face for two.

It’s off to a double chickenwing to keep Yim down, followed by a delayed vertical suplex (with squats) to show off Belair’s power. Mia is right back with a Tarantula and an SOS for two so an annoyed Belair dropkicks her in the face. The cocky cover gets one but what looks like a Glam Slam is countered into a rollup to give Mia two. Belair forearms the heck out of her for one and it’s back to the double chickenwing.

That’s broken up as well and a shot to the face gives us a double knockdown. Code Red gives Mia two more and Eat Defeat sends Belair outside. They chop it out on the ramp and dive back in at nine with Belair taking over again. Yim pulls the hair to get out of a powerbomb though and Protect Yo Neck finishes Belair at 10:08.

Long video on Tyler Breeze vs. Velveteen Dream, with Dream talking about how Breeze went to NXT and was overwhelmed so he’s back here to recapture his former glory. There is only room for one person to steal the spotlight here and that’s what Dream does.

We look back at Io Shirai saving Candice LeRae from the Horsewomen last week.

Shayna Baszler and the Horsewomen aren’t worried about Shirai because Shirai can’t bring weapons to Takeover. Baszler’s weapons, as in the Horsewomen, are right here.

One fan tries to start a GULAK chant and gives up in short order. Gulak’s wristlock doesn’t last long as Kushida takes him down, only to get reversed into a hammerlock. Kushida rolls away from that as well and it’s a standoff. A grab of the leg sets up a half crab on Kushida, which is broken up in a hurry. Kushida switches to a triangle and Gulak slaps his leg, which looked a lot like a tap but doesn’t count here.

The hold is broken up again and it’s off to an also quickly broken Crossface. Kushida can’t keep an Octopus hold on either and neither can hit a hiptoss. Instead Kushida gets sent to the apron and snaps the arm over the top rope. Back in and Gulak’s arm is fine enough for a gutbuster, followed by something like an Octopus hold on the mat. That’s broken up as well and Kushida gets the hiptoss, this time into an armbreaker.

Since a hold can’t stay on for more than a few seconds, Gulak gets up and grabs an ankle lock. That’s reversed into another armbreaker which is reversed into another ankle lock. Kushida scores with an enziguri into the corner and the Hoverboard Lock goes on. Gulak rolls away but gets caught in a Downward Spiral. What looks to be a camel clutch is rolled into a rollup to pin Gulak at 8:15.

Io Shirai isn’t worried about the Horsewomen but Candice LeRae comes up to say she has her back at Takeover.

Video on Johnny Gargano vs. Adam Cole. Johnny has worked hard to get here but Cole thinks that he deserves the title because of how great he is. Oh and pinning Gargano in the first fall in New York.

Burch armbars Blake to start but a blind tag lets Cutler come in for a double back elbow. A double backbreaker gives Blake two but it’s quickly off to Lorcan for the chops. Jaxson Ryker offers a distraction though, allowing Blake to hit a clothesline. Ryker gets ejected and here are the Street Profits to jump him. The Profits come in for the double DQ at 2:11.

Post match, with the fans chanting THANK YOU PROFITS, the fight is on with the Sons bringing in chairs. Cue the full Undisputed Era to beat everyone down and hit the pose. Cole grabs a ladder and the Era drives it into Ryker’s face. The ladder is set up on the stage and Cole sits on top of it, promising Johnny Gargano and Matt Riddle that Takeover will be Undisputed to end the show. 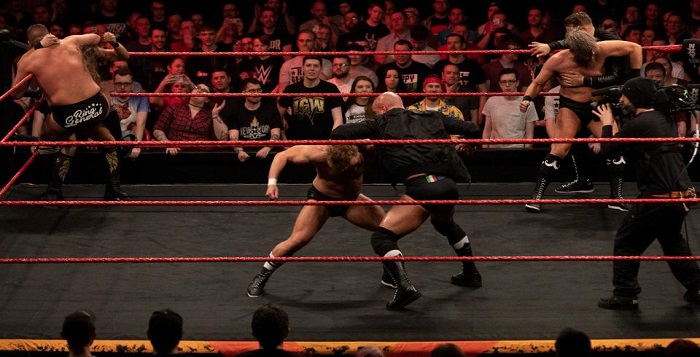