It’s the go home show for WarGames and that means DOUBLE LADDER MATCHES!!! Yes we’ll be getting the third and fourth ladder matches in WWE in about five weeks, because there is no other way to determine control of WarGames. That stupid coin flip stuff is just too old fashioned you see. Let’s get to it.

The two women’s teams get in a fight on the way to the ring before the non-participants brawl to the back.

Ladder match and Ray rocks her with a superkick to start. They’re on the floor in a hurry with the ladder being pulled out and Kai getting superkicked again. Kai is back with a roll of the dice onto the steps for a breather. Another ladder is pulled out but Ray uses the distraction to cut her off. There’s a big suicide dive to send Kai into the announcers’ table and Ray drops her ribs first onto the ladder.

Back in and Kai sends her into the standing ladder, allowing her to choke away in the corner. Ray knocks her down again and goes up but gets kicked in the face. An Alberto double stomp to the apron rocks Ray again and we take a break. Back with Kai bending Ray’s leg around the rope, only to have Ray escape and KLR Bomb her onto the announcers’ table.

Back in and they climb the ladder with Kai taking Ray down for the big crash. Instead of grabbing the briefcase though, Kai hits another double stomp off the ladder for a scary crash. Ray is right back up and ties Kai in a Tree of Woe in the ladder. A superkick knocks Kai free so Ray can go up and win at 14:08.

We recap Andre Chase and Cameron Grimes getting on each others’ nerves.

The Grizzled Young Veterans try to rob a locker but Ikemen Jiro distracts them. Josh Briggs and Brooks Jensen come up to scare them off.

Chase goes after him to start but Grimes fights back without much effort. Grimes runs him over, misses something off the top, and hits the Cave In for the fast pin at 2:29.

Post match here is Duke Hudson with FUNNY PHOTOS of the haircuts Grimes could get after WarGames. Grimes goes after Chase to blow off some steam but one of his students makes the save. Grimes promises to shave Hudson.

Edris Enofe talks about making it out of a bad neighborhood and joining the Navy. Now he’s ready to prove himself again.

Team 2.0 is in the ring and don’t care who is going to be facing Johnny Gargano in the other ladder match. They’re all ready to fight but it’s Bron Breakker getting the spot in the ladder match. Breakker is ready but here is Gargano to interrupt. Gargano: “It’s the big bad booty nephew himself!” Gargano doesn’t think much of Breakker having his team out here and challenges him to leave them in the back. Breakker is down and promises pain.

MSK has reached their destination as they have made it to the Shaman’s house. After the GPS insults them, they knock on the door and are greeted by….someone we can’t see.

Wagner throws Mendoza around to start and puts him in the corner for some kicks from O’Reilly. Legado takes over on O’Reilly in the corner but O’Reilly sweeps Mendoza’s leg to get him down. It’s back to Wagner for a waistlock as Xyon Quinn comes out to stare and Elektra Lopez as we take a break.

Back with Wilde chinlocking O’Reilly as Quinn and Lopez have their staredown. Quinn beats up Santos Escobar as O’Reilly fights back up, only to get caught with a springboard flip dive. O’Reilly gets over for the hot tag to Wagner though and it’s time to clean house. Mendoza sends him into the corner and hits a springboard dropkick to put them both down. It’s back to O’Reilly, who is taken down as well, but Wagner gets slapped in the face on the apron. That draws him in to low bridge Wilde outside, leaving Mendoza to get caught with a clothesline/legsweep combination to give Wagner the pin at 12:20.

Imperium is ready but here are Wagner and O’Reilly to yell at them.

Tiffany Stratton is really rich and always has been.

Joe Gacy and Harland are in the ring with three other wrestlers (a smaller guy, a woman and a larger man). From this point forward, the Cruiserweight Title will not be bound by weight limits or gender biases. Gacy is here to prepare for his title shot against Roderick Strong at NXT….Conflict Resolution.

Gacy runs the smaller guy over to start and kicks him in the face. A gutwrench powerbomb finishes for Gacy at 1:03. Worry not though as Gacy gives him a hug after the pin. The woman gets to try her luck as this seems to be elimination rules. Cue the Diamond Mine, with Malcolm Bivens offering to let Gacy face Roderick Strong. Gacy wants it to be one on one but Strong jumps him, allowing the larger guy to offer a distraction. That lets Gacy hit his handspring lariat to leave Strong laying.

Solo Sikoa is ready for Edris Enofe but Boa interrupts. Sikoa can’t understand him and leaves.

Sikoa shoves him around to start and grabs a swinging Rock Bottom for an early one. As Robert Stone is watching in the aisle, Enofe gets in a shot of his own and a standing moonsault gets two. Sikoa kicks him down and drops a backsplash for two, setting up a Superfly Splash for the pin at 4:18.

Post match Boa comes in and goes after Sikoa, who clears the ring.

Indi Hartwell gets a phone call and is told that Dexter Lumis has disappeared from the hospital. Why someone who appears to be Mei Ying is sleeping on a couch in the background isn’t clear.

Xyon Quinn isn’t worried about Santos Escobar. Elektra Lopez comes up and rubs her handover him, telling him good luck against Escobar next week.

Hartwell is all shaken up because of Dexter Lumis disappearing so Feroz and Leon double team her in a hurry. Pirrota tags herself in and wrecks both of them though, setting up a fireman’s carry spun into an X Factor for the pin at 1:49.

We get a vignette from Draco Anthony, who says he’s what NXT needs. His actions speak louder than his words.

Ladder match. Gargano grabs a headlock to start, earning himself a delayed vertical suplex. Breakker is sent outside for a slingshot dive but it’s too early to get the ladder. Breakker runs Gargano over and brings the ladder inside, only to have Gargano come back with the slingshot spear. The ladder is shoved into Breakker’s face and a dive sends him over the announcers’ table as we take a break.

That earns him a few superkicks and Breakker is down in a heap. Gargano heads up so Breakker is right there to catch him with a super Frankensteiner. Breakker goes up but Gargano is there to meet him, including a briefcase shot to the head. That’s too early though as Breakker pulls him down and into the powerslam. Breakker goes up and grabs the briefcase for the win at 14:11.

Post match, everyone in the men’s match runs in and the big brawl is on. 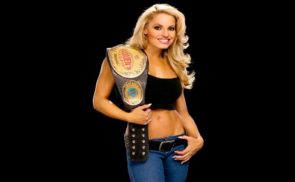 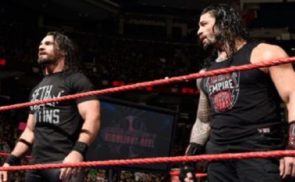