It’s time to focus on the women’s division as we have several women’s matches taking place this week. This includes a pair of title matches, plus a grudge match. That’s the easy part though. The fun part is finding out how many new people can be brought in with little to no explanation. Let’s get to it.

Here is Hit Row to get things going. They run down tonight’s focus on the women’s matches and wonder why no one is coming after Isaiah Scott’s North American Title? B Fab is ready to take out Elektra Lopez, so here is Legado del Fantasma to make things serious.

B Fab vs. Elektra Lopez

No DQ and the brawl starts on the floor before the bell. B Fab kicks Lopez in the head and they’re outside in a hurry, with the guys getting in a big brawl of their own as we take a break. Back with a fight over a table, with Lopez driving it into B Fab’s ribs. They get back in with a bunch of weapons joining them. B Fab grabs some kendo sticks to swing away but Lopez crossbodies her through an open chair. Lopez drops her ribs first across the top of the open chair, setting up a Blue Thunder Bomb to put B Fab away at 10:05.

We go to InDex’s honeymoon, with the two of them walking on the beach. Johnny Gargano and Candice LeRae are watching from the balcony of a hotel room and LeRae suggests that more things are going to happen. Dexter seems to like how Indi looks coming out of the water and Gargano panics. Then a shark starts coming up from the water and…..it’s Gargano with a shark fin on his head.

Here is Joe Gacy, to say that the ring is still a safe space and he has not been canceled. He has made a bigger impact than stars like Tommaso Ciampa and Bron Breakker, because he didn’t throw a punch. Gacy speaks for a generation while the rest of them lives in a dark world. Then last week he was shunned, but now he is here to usher the world into a new normal.

It’s a 205 Live rematch and Quin knocks Lorcan outside to start. Back in and Lorcan runs him over, setting up a quickly broken chinlock. Quin fights up with a Samoan drop and finishes with a running forearm at 2:58.

Grayson Waller talks about being a thrill junkie who loves to take chances. Now he’s taking a chance by going after the Cruiserweight Title.

Here is MSK for a chat. They have been champions for awhile now and they are going to keep smoking the division. Cue the Grizzled Young Veterans, who say that they want their two on two title shot but here are Trick Williams and Carmelo Hayes to interrupt. Hayes says they are going to be champions because he has the golden ticket. MSK is good with that but Zack Gibson wants to know why everyone is talking in riddles. Cue Josh Briggs and Brooks Jensen, who want in on this too. The brawl is on among the challengers and MSK hold up the titles.

Raquel Gonzalez is ready for Frankie Monet but Toxic Attraction comes in, with Mandy Rose saying the title will look better on her.

Shirai and Stark are defending and Mandy Rose is here with the challengers. Shirai flips away from Dolin to start, though she can’t quite get the nip up right. The second takedown sets up a more successful nip up and it’s off to Jayne, who gets taken down in the corner. Stark comes in for some rapid fire rollups as commentary talks about how the champs never defend their titles.

Stark chops her down and hits a slingshot Swanton for two. Dolin comes in off a blind tag and kicks Stark down but the champs are back up with some springboard dropkicks. Some dives to the floor have Attraction in trouble and we take a break. Back with Jayne hitting a running knee to Shirai’s face. Shirai is back with a kick to the face though and the tag brings in Stark to hit people in the face.

Stark gets knocked into the corner though and it’s back to Shirai to clean house again. A 619 sets up a springboard missile dropkick for two on Dolin as Rose is panicking on the floor. Everything breaks down and it’s Stark hitting her GTS on Jayne…and tagging out instead of covering. Stark dives onto Dolin but stops to glare at Rose. Shirai hits the Moon Over Moonsault to retain at 12:43.

Video on Bron Breakker, who wants to be NXT Champion.

Tommaso Ciampa joins us via Facetime to say that Breakker is talented but let’s hold off on the Hall of Fame induction for now. Breakker is a stud but it took Ciampa over 900 days to get back the title that he never lost. They’ll face each other one day and Breakker will drown in an ocean of inexperience.

Chase doesn’t think much of Tian Sha and grabs an armbar to start. A suplex sends Boa flying and it’s time to stomp away. Chase puts on a chinlock and shouts that Boa has a lot to learn, but Boa is back up with some kicks to send Chase outside. Chase shouts a lot and then goes over to Mei Ying, who mists him in the face. Boa’s layout reverse DDT finishes at 3:09.

Back to the honeymoon, with Johnny Gargano worrying about what could happen when InDex goes to their room. Gargano lies his way into the hotel room (Gargano: “Security around here sucks.”) and finds a bunch of condoms in Lumis’ bag. InDex comes back and Gargano hides in the closet as a pillow fight breaks out, complete with various statements that sound like….I think you get the idea. InDex takes a nap and Gargano leaves, with Lumis holding up the condoms and giving him a thumbs up.

Waller is challenging and comes through the crowd to jump Strong before the bell. A heck of a suicide dive takes Strong down and we take a break. We come back joined in progress with Waller hammering away until Strong dumps him outside for a breather. The abdominal stretch goes on to keep Waller in trouble but he fights out to set up a pinfall reversal sequence.

Strong goes with his basics by hitting a backbreaker and the camel clutch goes on. With that broken up, Waller gets suplexed for two but manages to block a superplex attempt. Waller hits a top rope missile dropkick and sends him outside for a big flip dive. Back in and Waller hits a Stunner for two of his own, only to walk into a jumping knee to the face to retain Strong’s title at 6:19.

LA Knight doesn’t like Odyssey Jones coming in here and talking about the uncrowned NXT Champion. Cue Jones to scare Knight and say that Knight has never seen anything like him. Andre Chase walks by to complain about the lack of a DQ, allowing Knight to jump Jones.

Dante Chen is from Singapore. This is the extent of his character.

Cora Jade and Trey Baxter are excited for her match next week. She’s only twenty years old and is ready for the future. They seem rather happy together.

We have the debut of Lashing Out With Lash Legend, who is on a stage with an audience. She goes over various topics in NXT, such as the Draft (allowing her to talk about her WNBA career), Trey Baxter/Cora Jade and her Lash Out of the Week, which is Andre Chase.  Applause wraps it up.

O’Reilly jumps Holland before the bell and we take a break (again). We’re joined in progress with Holland working on the ribs and hitting a backbreaker to keep O’Reilly in trouble. The bearhug goes on but O’Reilly fights out in a hurry and starts striking away. Holland plants him face first though and grabs a powerbomb for two. O’Reilly knocks him down again and goes up but Pete Dunne offers a distraction. Not that it matters as O’Reilly grabs a rollup for the pin at 5:27.

Post match the beatdown is on but Von Wagner makes the save.

Tony D’Angelo is still on the docks, is still in the mob and is still talking about his family. The difference this time: he debuts next week.

Monet, with the rest of the Robert Stone Brand, is challenging. Gonzalez gets headlocked down to start and then powers her off without much trouble. Another hard toss has Monet in trouble so it’s out to the floor, where Gonzalez gets pulled off the steps for a crash. Back in and some running knees to the back have Gonzalez in more trouble and a suplex gives Monet two.

Monet cranks on part of a surfboard and then kicks her down for…well no count actually as Gonzalez’s shoulders aren’t down. Back up and Gonzalez drops Monet for a change, setting up the spinning Vader Bomb for two. Gonzalez’s back gives out though and Monet double stomps her for two of her own. Not that it matters as Gonzalez is back up with the Chingona Bomb for the retaining pin at 7:52.

Post match Monet and company go to leave but here is Toxic Attraction to jump them from behind. With Monet dispatched, Toxic surrounds Gonzalez and beats her down, allowing Mandy to hold up the title to end the show.

Former World Champion To Be Free Agent, Open To Offers 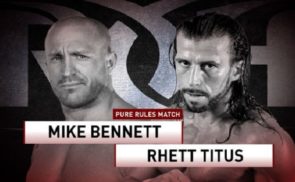