We’re done with Extreme Rules and the biggest changes involve a doll and this show. First up, Charlotte destroyed Lillie the doll last night, sending Alexa Bliss into an emotional breakdown. Other than that we have a WWE Championship match set for the top of the show, because Monday Night Football is going to kill them otherwise. Let’s get to it.

We open with a recap of Big E. cashing in Money in the Bank to win the WWE Title, plus pinning Bobby Lashley again last night at Extreme Rules in a six man tag. The rematch is set for tonight.

Big E. is defending and after the Big Match Intros, we’re ready to go. Lashley powers him into the corner to start so Big E. fires off a slap to the face. That earns him a beating in the corner and a snap suplex for less than one. A clothesline puts Big E. on the floor but he snaps off a belly to belly to send us to a break. Back with Lashley hitting a Downward Spiral into a big clothesline to put Big E. in even more trouble. Lashley takes him up top but Big E. blocks the superplex.

That’s fine with Lashley, who knocks him off the top and down onto the apron for a crash instead. The double clothesline on the floor teases the double countout but they make it back inside. That means the slugout can be on but Lashley has to go to the ropes to avoid the Big Ending. The spear through the ropes drops Lashley….but here are Shelton Benjamin and Cedric Alexander in Hurt Business shirts. Lashley hits a spinebuster and seems pleased but here is New Day to go after Alexander and Benjamin. The spear cuts Big E. down as the other four fight inside for the DQ at 10:00.

Post match the brawl is on and security comes out to break it up. Actually we’re not done as this match is happening again later tonight inside a steel cage.

Ivar and Humberto Carrillo are here too. Erik powers him around to start but gets caught in an armbar for his early efforts. That’s broken up and Garza is back with his knee to the face. Garza TAKES OFF HIS PANTS, which Carrillo teases throwing in. That brings Ivar over but the distraction lets Garza hit a superkick into the Wing Clipper for the pin at 2:01.

Reggie is defending. Feeling out process to start with Ricochet working on a wristlock but they need to trade moonsaults over each other out of the corner. Ricochet sends him outside for the big flip dive as the 24/7 goons are watching from the front row. That’s enough for them to jump the barricade and jump Reggie for the DQ at 1:20.

Result: Reggie b. Ricochet via DQ when R-Truth interfered (1:20)

Post match Ricochet fights back but Drake Maverick has a walkie talkie, telling someone to do it now. Cue Akira Tozawa to go after Reggie, who escapes anyway.

Riddle is on his own tonight because Randy Orton is probably taking a week off to have some Skyline Chili. Or he needed to take a break from Riddle because he wanted to RKO him on the concrete. Riddle thinks that’s a bad idea because it could hurt Orton’s back. It’s cool though, because Riddle has his headphones with Orton’s theme song. Singing ensues.

Akira Tozawa is still in the ring and wants a match with someone.

Yes it’s Bearcat and it’s a splash into the Big Bang Catastrophe for the pin at 35 seconds.

We recap the opening match and a very serious Big E. promises to beat Bobby Lashley again, just like he did when he promised to cash in.

US Title: Sheamus vs. Damian Priest

Priest is defending and it’s no countout/no DQ. Before the match, Sheamus says this won’t be pretty, but it will be pretty ugly as he gets the title back. They go with the power to start with Sheamus headlock takeovering him down.

Priest fights up but gets elbowed in the face to cut him off. The Broken Arrow is broken up so they head outside, where Priest hits a quick suplex. There’s a big boot and it’s already time for a table. Sheamus isn’t having that and sends Priest into the steps but the ten forearms on the apron are broken up. Instead, Sheamus hits the White Noise through the table in a big crash to send us to the break.

Back with Priest fighting out of a kendo stick choke. Another table is set up in the corner but Priest is back up with kendo stick shots. A chair is brought in but Priest is sent head first into it in the corner. Priest is back up with South of Heaven for two and they slug it out from their knees. An enziguri gives Priest two but he jumps into the jumping knee to the face for the same. The Reckoning is loaded up but Sheamus slips out, only to be sent through the table in the corner. Now the Reckoning can retain the title at 15:50.

Mustafa Ali isn’t happy with Mansoor signing the two of them up for a six man tag with Jeff Hardy. Ali rants about Hardy, who pops up behind them, asking what Ali would say to them. After Ali backpedals hard, Hardy talks about how they are up against some scary monsters. He’s ready to twist their fates.

Shanky sidewalk slams Ali to start so it’s off to Mansoor, who gets elbowed by Veer. We hit the neck crank for a bit but Mansoor fights up in a hurry and brings in Jeff to clean house. Everything breaks down and Veer’s baseball lariat finishes Ali at 3:44.

Kross knocks him into the corner to start and mocks Ryker’s military history. A suplex takes Ryker down but an armbar is broken up. The Doomsday Saito set up the Krossjacket to make Ryker tap at 1:37.

Doudrop is going to answer Charlotte’s Open Challenge for a Women’s Title match.

Bobby Lashley rants about Big E. winning the title with the Money in the Bank briefcase. Tonight, he isn’t injured and he can hurt Big E. even more in a cage.

Riddle suplexes him down for an early two but gets hit in the face for a trip to the floor. AJ hits a sliding knee off the apron and we take a break with Riddle in trouble. Back with Riddle striking away but getting caught in a pumphandle gutbuster to cut him off. Riddle kicks him to the floor and hits a big dive to take AJ down again.

Back in and the Floating Bro is countered into a Calf Crusher but Riddle slips out. The comeback is on as Riddle gets all fired up, even knocking Styles down a few times. That’s fine with AJ, who counters a running knee into a Burning Hammer into the Styles Clash for the pin at 12:10.

We look back at Shayna Baszler snapping on Nia Jax and putting her on the shelf with an arm injury last week.

Charlotte is defending. Doudrop shoves her around to start and Charlotte can’t manage to slam her. The big running backsplash crushes Charlotte….and here’s Eva Marie for a distraction. Charlotte gets in a chop block and Natural Selection retains at 1:52.

Post match Eva poses over Doudrop and gets decked by Charlotte.

Goldberg is back and talks about how he and Bobby Lashley are both fathers. He doesn’t know what kind of a father Lashley is but Lashley attacked Goldberg’s son at Summerslam. Now he is going to fulfill the vow he made when his son was born and hurt Lashley a lot.

Eva Marie is still in the ring and complains about the disrespect. She can beat anyone in the locker room so here is Shayna Baszler. The Kirifuda Clutch knocks Eva out in a hurry and the fans approve. Shayna lets go and unloads on Eva’s arm ala last week with Jax for a bonus.

Nikki Ash and Rhea Ripley say they have nothing in common except the titles. Nikki thinks they need matching blue gear, but Rhea says it’s a good color on Nikki only.

Lashley is challenging in a cage and jumps Big E. before they’re both inside. Big E. is sent into the barricade and the cage as this is one sided before the bell. A posting makes it even worse and we take a break. Back with the bell ringing and Big E. sending him into the cage over and over. A running clothesline drops Lashley again but he’s back up with a trip into the cage wall.

The spear is countered into a hiptoss into the corner but Big E. has to fight out of a Hurt Lock attempt. Lashley settles with a suplex for two and goes up but Big E. is right up there for an attempt at a super Big Ending. That doesn’t quite work as Big E. comes back down but gets caught in a dragon sleeper over the ropes. That’s enough for Lashley to go for a climb but Big E. is back up for the save.

Big E. goes up but the Hurt Business is there to cut him off. Lashley goes for the door but here’s Xavier Woods to slam the door on his head. New Day gets rid of the Hurt Business, with Kofi hitting the trust fall off the cage onto both of them. We take a break and come back with Big E. ducking an elbow and hitting the trio of belly to belly suplexes. The spear cuts Big E. down for two though and Lashley goes for the door. That’s broken up so Lashley tells him to stay down, only to walk into the Big Ending for two. A spinebuster plants Big E. so it’s time to climb but Big E. pulls him back down with the super Big Ending to retain at 16:31.

Post match the cage is raised, but here’s Drew McIntyre to stare Big E. (who is fine with this) down to end the show. 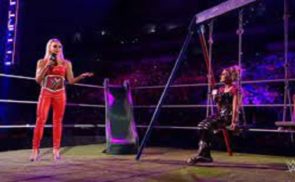 Monday Night Raw Star Going Away For A Few Months 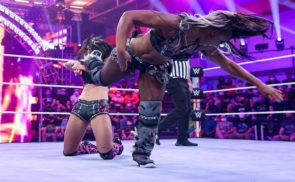