We are firmly away from Death Before Dishonor and in theory this should be the tapings where we see some fallout. That being said, last week we got some pre-fallout (Fall-in?) with the Tag Team Titles changing hands. Not that it makes much of a difference given how often they have been swapped as of late, but it’s certainly an event. Let’s get to it.

Quinn McKay welcomes us to the show and runs down the card, with a focus on the Pure Rules division.

No word on how many entrants and lost rope breaks carry over from one fall to another. Eric Martin is in at #1 and World Famous CB is in at #2 with Brian Milonas on commentary. They trade the grappling to start with Martin going to the ropes to avoid a drop toehold. Then he uses the next two in rapid fashion and is out of breaks after less than a minute and a half. Martin kicks CB off the top for a crash to the floor and it’s a running corner clothesline back inside. CB is right back with a kick to the face and a choke with knees in the back for the tap at 3:14.

Delirious is in at #3 and it’s time for more grappling to get things going. They hit the mat with both guys tripping the other for some short form control. CB’s headscissors sends Delirious over to the ropes for a break and it’s time to run the ropes in an awkward manner. A dragon suplex sends Delirious flying but he twists around into a cobra clutch. That’s broken up as well so CB tries a bunch of rollups to no avail. Delirious is right back with a cobra clutch backbreaker into a triangle choke while bending the arm the wrong way for the tap at 13:23.

LSG is in at #4 and after a break, Delirious’ headlock doesn’t work very well. Instead they just hit each other in the face until Delirious grabs a neckbreaker for two. LSG blocks a suplex though and strikes away, including some running forearms. With Delirious rocked, LSG pulls him into a Muta Lock for the tap at 21:13.

Joe Keys is in at #5 and, after a break, gets taken down by a headlock takeover. Keys snaps off a backbreaker but gets sent into the corner, only to come out with an abdominal stretch. A tilt-a-whirl backbreaker keeps LSG’s back in trouble and we hit a half crab. That means LSG needs to use his second rope break so Keys rolls some German suplexes, meaning LSG needs his third and final break. Keys takes him up top for a superplex but LSG turns it into a crossbody for the pin at 30:28.

Brian Johnson is in at #6 and talks about how he is the best and about to rewrite everything around here. Johnson drives the beaten up LSG into the corner for some shoulders to the ribs but LSG is back with Rocket By Baby. A rope break gets Johnson out of trouble so he throws a right hand (one more and he’s disqualified) and throws his feet on the ropes (which is fine because LSG is out of breaks so it doesn’t count) to pin LSG and win the whole thing at 32:56.

Pure Rules again. They go with the grappling to start and try a test of strength to no avail, with both of them kicking the other away. That’s good for a standoff so Titus grabs a headlock to put Bennett in some trouble. The Cobra Twist makes it worse and we take a break. Back with Titus working on the leg and the threat of a Boston crab makes Bennett burn a rope break.

Bennett has to use a second to save himself from another hold so Bennett goes after the arm. That doesn’t work either so it’s time to chop it out instead. Bennett blasts him with a discus forearm to the jaw and Titus has to use his first break. Bennett pulls him back to the mat and snaps off a DDT onto the leg as we take a break.

We come back with Bennett having to use his third break before getting gutwrench suplexed for two. An ankle lock sends Titus going for the ropes again so Bennett ties up the legs again. That’s fine with Titus, who starts a slap fight from the mat. Back up and Titus’ leg gives out but he’s able to block the piledriver. Bennett kicks the leg out again but gets rolled up for two. They fight over a bunch of rollups and trade clotheslines until the time limit expires at 15:00. The judges give it to Bennett. 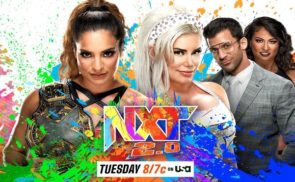