That’s a better fit. Celebrities have a weird history in wrestling, as some have done very well but others have clearly been in over their heads with no reason to be there in the first place. That can create some problems if they try to have a match without a lot of catering to their individual cases. WWE seems to understand this and is making such an adjustment to an upcoming celebrity match.

Sami Zayn is scheduled to face Jackass’ Johnny Knoxville at WrestleMania 38, following a months long feud between the two of them. This week on SmackDown, Zayn requested that the match be made anything goes, with Knoxville accepting the stipulation later in the night. Knoxville and Zayn have been feuding since January, with Zayn eliminating him from the Royal Rumble and Knoxville flying Zayn’s phone number behind a plane over Los Angeles last week.

Opinion: This isn’t much of a surprise and is the right move for everyone involved. Knoxville can do his Jackass style stuff and probably bring in some of his friends, which is how the match will probably work best. It wouldn’t make sense to have Knoxville stumble through a match of armbars and wristlocks, so go with his strength and let it be a big stunt show, as it should be.

What do you think of the stipulation? How do you see the match going? Let us know in the comments below. 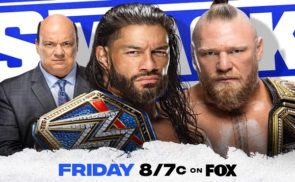