Wrestlemania is two weeks from tomorrow and we have most of the card set. There are still some matches to be made, but most of this show is probably going to be about building on what has already been started. That can make for some successful shows, but the stories need to be good in the first place. Let’s get to it.

In memory of Scott Hall.

Here is the Bloodline to get things going. Reigns tells the crowd to acknowledge him before moving on to Lesnar. Hold on though as Heyman interrupts, saying that due to a bad weather pattern, Lesnar is stuck in Canada and will not be here tonight. The fans want Lesnar and Reigns says he wants the same thing.

Reigns talks about how he would have smashed Lesnar had be been here but keeps cutting off Heyman from saying something else. He finally lets Heyman give his update: Lesnar has landed and he’s on his way here! Heyman: “WHAT ARE WE GONNA DO?” Reigns: “I know what I’m gonna do: I’m gonna let you wrap it up and we’re gonna get out of here.” Everyone bails in a hurry after a funny moments from Reigns.

After a look at what’s coming tonight, the Bloodline is running away and gets in their car. Cue Lesnar, on a forklift (which was apparently just laying around), to stab the lift through the car and, during a break, turn it its side. The Bloodline escapes and gets in a truck, which Lesnar chases down and rips a door off as they peel out again. Lesnar even dropped his hat.

Here is Lesnar in the arena, with the truck door, saying he is a little fired up. Roman Reigns has unleashed the bipolar beast. In two weeks, at Wrestlemania, Lesnar is going to do more than blow the door off because he’s coming for blood so Reigns better be prepared.

We look back at Rick Boogs earning a Tag team Title shot at Wrestlemania for himself and Shinsuke Nakamura.

Humberto and Nakamura start things off, with Nakamura not being thrilled at the kiss blown his way. COME ON sets up the beatdown on Humberto, including Good Vibrations in the corner. The running knee to the ribs gets two so it’s Angel coming in to take over with some double teaming. Angel TAKES OFF HIS PANTS and it’s a double basement dropkick to the back for two on Nakamura.

That doesn’t last long but the comeback is cut off so Nakamura can get beaten down some more. A cheap shot takes Boogs off the apron and a running shot to the face gets two on Nakamura. That’s broken up this time though and the hot tag brings in Boogs to start cleaning house. The Boogs Cruise finishes Angel at 4:46.

We look back at Drew McIntyre fighting off a three on one beatdown last week.

Happy Corbin is ready to win, though Madcap Moss’ joke (What do you call an episode of Happy Time that puts everyone to sleep? Nappy time!) has everyone looking at him.

Madcap Moss is here with the villains. Shanky takes Erik into the corner to start so it’s off to Mahal, who gets dropped by the Vikings. Ivar cleans house but Corbin plants him with a spinebuster and we take a break. Back with Mahal putting Ivar in a chinlock, which is broken up without much trouble. The hot tag brings in McIntyre to take out Mahal and Shanky as Corbin and Moss watch from the floor. A Michinoku Driver sets up the Claymore to finish Shanky at 7:14.

Sami Zayn is sick of Johnny Knoxville and his childish pranks. Zayn wants their Wrestlemania match to be anything goes.

Carmella and Queen Zelina are at ringside. Morgan and Banks start things off with Banks wristdragging her down. They trade rollups for two each and stereo dropkicks give us a standoff. Naomi comes in and takes Liv down for the splits splash but it’s off to Ripley instead. As Carmella shows off her engagement ring, Ripley hits a basement dropkick for two on Naomi and then powers out of a headlock.

Banks gets her chance but can’t manage a suplex on the bigger Ripley. Instead Ripley hits a delayed vertical suplex for two, allowing the tag back to Morgan. Banks and Naomi are sent outside so Ripley can cannonball them down from the apron as we take a break (with the champs being very happy).

We come back with McAfee pointing out that these three teams were all thrown together as Ripley fights out of a chinlock. Banks comes back in for the double knees in the corner to Morgan, setting up the middle rope Meteora for two. Morgan enziguris her way out of trouble so Ripley can come in with a heck of a missile dropkick for two on Banks. Riptide is broken up though and it’s a Backstabber from Banks to set up the split legged moonsault for two, with Morgan diving in for the save. A double superplex to Ripley is turned into a Tower of Doom….but Natalya and Shayna Baszler come in for the double DQ at 11:50.

Post match the big beatdown is on with the champs joining in. Natalya and Baszler say they’re coming for the titles so Carmella and Vega get nervous. Some Natalya sign pointing makes things even more clear.

Johnny Knoxville is in on the anything goes deal.

Pat McAfee has been summoned to Vince McMahon’s office.

Sonya Deville approves of Natalya and Shayna Baszler, so they’re in the Women’s Tag Team Title match too.

Here is McAfee back in the arena and getting into the ring. McAfee talks about seeing professional wrestling (his words) for the first time as a kid and it shaped him forever. He always wanted to do something and after he retired from the NFL, he got a call from Michael Cole, who offered him a job doing commentary on Smackdown.

McAfee talks about going from city to city but here is Austin Theory to interrupt. As per Vince McMahon’s orders, McAfee has to apologize for last week, so McAfee apologizes for giving him that beat. He also apologizes for Theory’s parents hating him and for Theory being a punk b****. Theory takes a selfie, laughs about the apology, and shoves McAfee being running off.

We look back at Brock Lesnar chasing the Bloodline into the parking lot and ripping the door off the hinges.

Butch and Sheamus are here too. Before the match, we look at Big E.’s injury and his various messages, including saying how touched he is by the outpouring of success and promising to get better. It’s a brawl to start with Holland being knocked outside and Kofi trust falls him into the announcers’ table. We take a break and come back with Kofi fighting out of a chinlock and chopping away. Kofi starts the real comeback and hits the Boom Drop but a Sheamus distraction lets Butch shove Kofi off the top. Butch gets ejected but tries to come back in. That’s enough of a distraction for Holland to hit Northern Grit for the pin at 6:52.

Long recap of Ronda Rousey vs. Charlotte’s recent issues, with Rousey making Charlotte tap to the ankle lock. Charlotte couldn’t make Rousey tap last week though and frustration seems to have set in.

Here is Charlotte for the closing chat. Charlotte talks about her dominance and says no one has caused Ronda Rousey more pain than her. She is going to beat Rousey at Wrestlemania because she is the mountain that Rousey has to climb. Rousey does not have what it takes to win so she will go back home and make another baby after it’s over. Actually Charlotte can’t wait, so come out here right now and take a beating in Charlotte’s hometown.

Cue Rousey, ignoring Kayla Braxton’s warnings that it might be a trap, but Charlotte pulls out a kendo stick. Rousey ducks the big swing though and goes for the armbar, sending Charlotte outside. That’s fine with Rousey, who follows her out for the ankle lock. Charlotte breaks that up with a kendo stick shot but the choking won’t make Rousey tap. Instead, Charlotte powerbombs her through the announcers’ table to end the show. 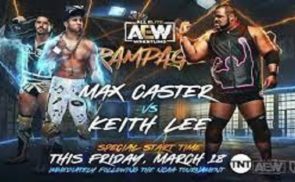