We’re officially done with Intimidation Games, meaning the still World Champion Tom Lawlor seems to be done with Low Ki. He’s just getting started with Contra though, the group which debuted last week to attack Lawlor in a heck of a beatdown. This could get interesting as we go forward. Let’s get to it.

We open with a recap of last week’s steel cage title match and Contra’s ensuing debut and beatdown.

On his way to the ring, Ace talks about the respect he has for DJZ but tonight is about going to Battle Riot. They fight over arm control to start as Cornette is mocking DJZ’s shaved head. Austin sends him outside, cartwheels over him on the apron, and scores with a dropkick to keep DJZ in trouble. A quick superkick gets DJZ a breather but Austin sticks the landing on a whip over the barricade.

Back in and DJZ knocks him into the corner but the rolling DDT is countered into a jawbreaker. Austin anklescissors him off the top and nails a spinning middle rope Fameasser for two. DJZ is fine enough to nip up into a dropkick (always cool to see) and a knee to the head gets two more, with Cornette being shocked by the kickout. A springboard in the corner doesn’t work so well for Austin as he gets powerbombed down in a big crash. DJZ rolls towards him though but gets caught with the Fold (running Blockbuster) for the pin at 6:00.

Salina de la Renta doesn’t like Mance Warner and Fred Yehi being loud and it gets worse when Warner spills beer on her.

Jimmy Havoc is still coming back.

We look back at Contra attacking Lawlor again.

Rich talked to the doctor on the phone but can’t get any update on Lawlor due to privacy issues. He then goes on to list off all of Lawlor’s injuries because the doctor doesn’t know what privacy means.

Alex Hammerstone is on the phone with someone and says he’s in. He gets mad at the camera being there but does say he’s in Battle Riot (sounded like something different from the phone call).

We look at Rich Swann losing it a few weeks ago and attacking Rich.

Hammerstone’s music is very loud, to the point where it sounds like they’re intentionally trying to drown out commentary. Velasquez goes at him in the corner to start and scores with a jumping knee to little effect. Attempts at an Irish whip and an armdrag go nowhere and an enziguri just annoys Hammerstone. Velasquez does manage to knock him outside, where Hammerstone hits a Last Ride onto the apron. Back in and a scary t-bone suplex drops Velasquez on his head, followed by a rather delayed superplex. The Nightmare Pendulum finishes Velasquez at 3:45.

Maxwell Jacob Friedman and Richard Holliday are on their way to an after party but don’t like what they find and yell a lot. They’ll chill during a joy ride in their new car.

Warner and Yehi share another beer when El Hijo De LA Park comes up to get in a fight with Warner, likely at Salina’s orders. Brian Pillman Jr. comes up and finishes Warner’s beer.

The Hart Foundation is ready for MJF and Holliday next week.

Salina rants about Warner and calls Ricky Martinez to deal with him.

We look back at Gotch issuing an open challenge and losing $20,000 to Romero.

Romero wastes no time in shouldering Gotch down in a single big shot. A suicide dive (Cornette: “Looks like a flying bus!”) drops Gotch again but he’s fine enough to kick Romero down back inside. The fans are more interested in finding out what happened to Gotch’s shaved mustache. More kicks to the leg and head drop Romero in the corner but Gotch would rather go outside and yell at commentary. Back in and Romero starts swinging but Contra comes in for the DQ at 3:55.

Post match the beatdown is on with a railroad spike to the head busting Romero open. The three of them beats Romero down even more and put coins over his eyes. Romero gets covered with the flag as a fan tries to jump the barricade. Contra finally gets out of the ring and leaves to end the show.

If you like the sound of this show, you can check it out right here for free: 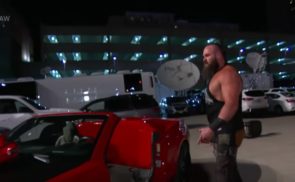 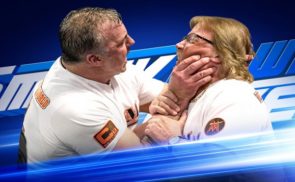