We’re kind of at a new beginning around here as the trios tournament ended and a bunch of the Aztec medallions have been won. We’re probably coming up on Ultima Lucha soon enough and at this point it’s pretty hard to guess what the biggest matches on the card might be. Let’s get to it.

The opening recap focuses on the Aztec medallions and Mariposa vs. Sexy Star.

Dario Cueto is looking at the hole in his roof when Catrina comes in. They argue over who nearly killed who when Matanza fought Mil Muertes and Catrina wants a rematch. Dario is willing to give Mil the rematch and since he’s feeling generous, let’s make it Grave Consequences. Oh and this is going to be a special one with four caskets, making it Graver Consequences.

Mack goes right after him without even taking off the jacket. A northern lights suplex gets two and a German suplex sends Marty flying but he pops up with a dropkick to take over. Marty sends him into the corner with an exploder suplex for two of his own. That’s about it for his offense though as a Norman Smiley swinging slam of all things sets up a legdrop (and a Hogan impression) for two on Marty. A Stunner and a TKO Stunner are enough to put Martinez away at 3:26.

Catrina tells King Cuerno she’s going to have Sinestro de la Muerte (the only Disciple left) take care of the Gift of the Gods Title instead of him this time. That’s not cool with Cuerno so the hunt is on.

Sexy Star comes in to see Dario, who talks about seeing a lot of his mother in her. The only way he and Matanza could stop their mother from torturing them was to stand up to her. That’s what Sexy needs to do to Mariposa and tonight she gets the chance for revenge and for a medallion. It’s going to be a no mas match which means I Quit. His advice to Sexy: after she makes Mariposa quit, don’t quit.

Catrina is with Sinestro. Cuerno dropkicks him into the corner two seconds into the match as the announcers don’t know about Sinestro absorbing the hearts of his fellow Disciples.  Sinestro chops Cuerno down but Catrina breaks up the Arrow with a rock to the back of the head, setting up a springboard Fameasser to give Sinestro the pin at 1:52.

Catrina does the Lick post match and then hits him in the head with the rock again.

Mascarita Sagrada is doing curls when Famous B. comes in with Sagrada’s first match, which is for an Aztec medallion.

Chavo Guerrero wants to know why he’s not fighting for a medallion. Dario doesn’t think he’s worthy of one because of all the times he’s failed before. Chavo likes the idea of seizing the opportunity.

Cage is defending and Famous B. does a big introduction with a dancing girl for Sagrada. The fans chant PLEASE DON’T KILL HIM but Cage pretty much does with a big release F5 for the pin at 58 seconds.

I Quit rules, which Vampiro says is the one match in his career that he wouldn’t go for. Mariposa takes over early with a slam and elbow drop before choking with a boot in the corner. That’s a no (as in keep the match going, not no mas) so Star sends her into the corner for a slingshot Bronco Buster.

Three Amigos set up a half crab on Mariposa but Star is no Lance Storm so the hold is quickly countered and reversed into a freaky leglock. Star makes the ropes which shouldn’t matter but Mariposa lets the hold go anywhere. They quickly head outside with Star no selling the knee and ripping off some chops. Mariposa one ups her with some LOUD chair shots, including throwing one at her for a very modified Conchairto.

Still no from Star though and she sends Mariposa into the barricade before driving a chair between Mariposa’s legs (Striker: “STEELY DAN!!!”) but again that doesn’t seem to have much effect. Instead Mariposa drags her up the steps by the hair and starts ripping at the mask. They climb up into the catwalks and the scaffolding as the fans lose their minds. Vampiro leaves commentary as we pan out to see how high up they really are.

Star almost falls as we see the blood coming down her face. Thankfully they come back down as Marty is out here to be creepy around Sexy. Marty rubs her bleeding face against the barricade so here’s the Mack to beat him up like a good friend. Star steals someone’s purse to beat on Mariposa but gets beaten down again and starts spitting up blood. That’s it for Mariposa’s offense though as Star BLASTS her with a trashcan.

They actually get back inside with Mariposa punching her in the throat and putting on something like a Sharpshooter with her arms, earning an F*** YOU MARIPOSA (uncensored on the mic) from Star. Sexy jumps on her back and chokes Mariposa until Marty comes in again for the save. Mack comes in with a Stunner for the save and a cross armbreaker makes Mariposa give up at 15:30. 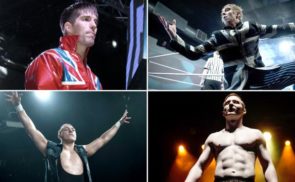 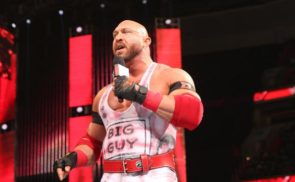 Backstage News On Meeting Between Ryback and Vince McMahon Before Raw