We’re still in Japan for the Honor Rising tapings from February and it’s still the first night of the show. Tonight it’s almost all about the Bullet Club, including appearances by people who are no longer in the promotion. I’d assume we’ll be getting at least two or three more weeks of this stuff so there’s a long way to go. Let’s get to it.

In this case it’s Bad Luck Fale/Cody Hall/Tama Tonga/Yujiro Takahashi. Moose and Fale, the big monsters of each team, start things off with Fale pounding away to take over, only to eat a dropkick to take the bigger man down. Fale is sent to the floor and we take an early break. Back with Tonga hammering on Honma (a Tag Team Champion coming in here) before everything breaks down into a big brawl.

The good guys clear the ring and pose before everything breaks down again and the brawl heads to the floor. Yujiro chairs Tanahashi in his bad shoulder to take over and it’s Fale standing on Tanahashi’s back to keep him in trouble. Hall comes in for a few shots before it’s back to Tonga. Tanahashi ducks his head and Tonga slides around him a few times before scoring with a dropkick.

Takahashi comes in for a bit before it’s quickly off to Elgin for the power displays, including holding Tonga over his head with one arm for a gorilla press. We take another break and come back with Elgin suplexing Takahashi and Hall (who stands 6’6) at the same time. A deadlift German suplex gets two on Takahashi but he gets in a low blow to slow Elgin down. Moose comes in for his fist pump punches but Hall ducks underneath one and gets in a Samoan drop.

That’s no sold so Hall has to knee Moose in the ribs to block the spear. He can’t get Moose up for the Razor’s Edge though so instead it’s a discus lariat as everything breaks down again. Hall chokeslams Moose for two before Elgin Samoan drops Tonga and fall away slams Takahashi at the same time. Elgin isn’t done as he throws Tanahashi onto everyone but Hall. Moose runs the corner for a spinning cross body to set up the spear to put Hall away at 11:37.

The House of Truth tours Tokyo.

We look at Lio Rush getting a World Title shot against Jay Lethal at Supercard of Honor with Rush’s top rope C4 being countered into a cutter, followed by the Lethal Injection to retain Jay’s title. Post match Colt Cabana came out and talked about being an independent wrestler who can’t be fired by the people. Lethal accused him of running away from Ring of Honor because no one wants him here. The following night, Cabana came out and pinned Lethal in a quick exhibition to earn a title shot.

The House of Truth goes to a massage parlor when Delirious walks out the door. This leads nowhere. We cut to Lethal and Martini going to the New Japan store….and then we cut to Jay Briscoe trying to find a gym. Back in the store, Delirious is hiding among the masks. After some dinner is consumed, here’s Dalton Castle at a cat cafe. Absolutely none of this meant anything other than a way to kill time.

Anderson and Gallows (Bullet Club) attack to start but Jay takes Gallows to the floor with a Cactus Clothesline. Mark’s running apron Blockbuster drops Anderson and we take a break. Back with Mark rolling across the ring and stopping Anderson with the threat of a crane kick.

Mark gets taken out to the floor with Gallows dropping a legdrop onto the apron to keep Mark in trouble. They brawl out to the floor with the Club in full control as Wrestling 3 talks about the history of Korakuen Hall for at least the second week in a row. We take another break and come back with Jay getting the hot tag to clean house. A Death Valley Driver gets two on Karl and everything breaks down again. Gallows is low bridged to the floor but slides back in to break up the Jay Driller. Mark mostly misses a top rope dropkick to put Gallows down and it’s the Froggy Bow to put Karl away at 8:23.

A long video package on the entire February tour wraps us up. 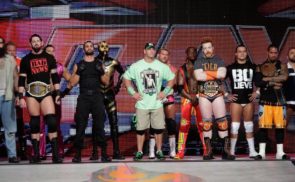 Unnamed WWE Veteran Partying Too Much, Locker Room Doesn’t Want to Work With Him Any Longer 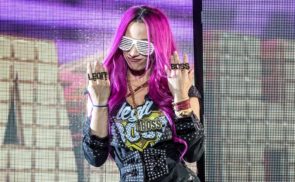 Is Sasha Banks Disgruntled About Her Position in WWE?