For the first time in a long time, we’re coming up on a pay per view with Slammiversary airing in June. The big stories at the moment are Drew Galloway wanting to fight Lashley, probably in the pay per view main event, and Mike Bennett being the first man to defeat Ethan Carter III which likely sets up a rematch at Slammiversary as well. Now take all of that and forget most of it because it’s time to put the focus back on the Hardy Boyz. Let’s get to it.

Earlier today, Lashley attacked Drew Galloway at the gym and beat the champ down. They wound up in an MMA cage and Lashley knocked him down with one punch but couldn’t choke him out. Eventually some other wrestlers broke it up.

Mike and Maria come out with the former bragging about being the one man to finally pull something off that no one else ever could last week. No one in the back can beat him and now he deserves to be World Champion. This brings out Jeff Hardy to interrupt. Jeff doesn’t think much of Bennett beating Carter because it just makes him a joke. The fans say Jeff is better and a match is pitched for later tonight. Bennett says he’ll go ask Dixie but Jeff cleans house, prompting Mike to say we’ll do it.

Joined in progress with Bennett slapping on a chinlock. Jeff fights back with an atomic drop and the legdrop between the legs but here’s Lashley to spear Jeff for the DQ at 1:48.

Bennett gets speared as well because Lashley is going to run through the entire roster until Dixie Carter gives him what he wants. Here’s Dixie who is indignant that Lashley wants to be handed a title shot. She makes Hardy vs. Bennett vs. Lashley for the #1 contendership as tonight’s main event with Drew as guest referee.

Rosemary asks Crazzy Steve is he’s ready for his transformation. He certainly is so she spits something into his mouth. Abyss takes off his mask and gets the same treatment. The stuff seems to burn both of their faces.

Here’s Decay for a chat. Rosemary talks about the team taking the titles from the people’s heroes last week and their transformations. Steve can now speak and talks about how Rosemary has changed him. Rosemary talks about how many people have tried to control Abyss, including his father and brother. Now though he can show his true self, which means he wears paint instead of a mask. Abyss says he’s beautiful and the fans seem to agree. Cue James Storm to say he’s a cowboy who drinks a lot of beer. It’s time for a fight and Decay is quickly dispatched. We’re not done yet though as Storm wants Abyss right now.

Maria wants Dixie to look at some papers. Jade better be smarter than Gail Kim was.

Here’s Maria to call out Jade for a chat. Maria sees Jade’s star on the rise but thinks she needs to just hand over the title now because Jade wouldn’t be anywhere without her. Jade says no so Maria brings out her friend Sienna to fight the champ. Sienna throws her around to start but Jade gets in a few kicks. They head outside with Jade being sent hard into the steps. Back inside and Sienna gives her something like a spinning Big Ending to leave Jade laying.

Bram says he’s been called a lot of things and now he’s being called champion.

And now, in case you haven’t heard enough talking yet, we have a sitdown interview with Ethan Carter III. Well at least we would if he was here but Bennett comes in to say that Ethan is missing because he’s scared. Tonight he’ll get his title shot no matter what.

We have a sitdown interview with Ethan Carter III. Well at least we would if he was here but Bennett comes in to say that Ethan is missing because he’s scared. Tonight he’ll get his title shot no matter what.

King of the Mountain Title: Bram vs. Eli Drake vs. Andrew Everett vs. Eddie Edwards vs. Jesse Godderz

Bram is defending in a King of the Mountain match, meaning you have to get a pin to become eligible to hang the title. If you pin someone, they’re sent to a penalty box for a minute so there’s some strategy involved. Jesse and Eli trade rollups to start as Everett hides on the floor with Shane Helms. Bram plants Everett with a powerbomb for the pin to become eligible early on.

Eddie grabs a half crab on Drake but Everett breaks it up. Edwards sends him out to the floor and hits a big dive, only to have Drake get in a cheap shot from behind for a rollup and pin to become eligible. Bram sets up a ladder and gets the belt but Jesse dropkicks him down. Drake slams Jesse but the champ comes back in for a Cactus Clothesline.

Everett misses a moonsault and gets caught in the Adonis Lock for a quick submission to make Jesse eligible. Edwards and Everett brawl to the back to leave us with three people. Godderz goes up but Drake pulls him down and hits him in the head with the Feast or Fired briefcase. He takes too long going up though and it’s Bram dropkicking the ladder down, allowing him to hang the title to retain at 7:25.

Drake tries to cash in post match but Bram gets up and chases him off.

Galloway says he’s had a rough day so he’d love to see Lashley try to put his hands on him.

Before the main event, Ethan Carter III comes out to congratulate Bennett on the win. Carter isn’t like the rest of those people who lost to him over the years and then came out here to complain about it. He accepts this loss but it’s changed him. Bennett needs to go and win that World Title because he wants to take the title back from Mike one day. Carter rants about how the loss made him incomplete and kept him from becoming the best wrestler on the planet. He’ll be back for Bennett soon enough.

For the #1 contendership with champion Drew Galloway as guest referee. Drew promises to call this down the middle and we’re finally ready to go. It’s a slow start with both guys going after Lashley who easily powers them away. The big guy is sent outside though and Jeff takes him out with a Whisper in the Wind as we go to a break.

Back with Jeff still fighting off both guys but eating a powerslam from Lashley. A long delayed vertical suplex, complete with a point to Galloway, plants Bennett. The spear hits Galloway though, followed by Bennett hitting the cutter on Lashley. Jeff dropkicks Bennett to the floor and adds the Swanton on Lashley for no count.

Bennett is sent face first into the steps over and over, followed by a Swanton onto Bennett on the steps. Cue the Decay to go after Hardy, including a chokeslam onto the steps. Decay leaves so Lashley spears Jeff into the post for a crash. Another spear gives Lashley the pin and the title shot at 14:02.

Lashley and Drew brawl to end the show. 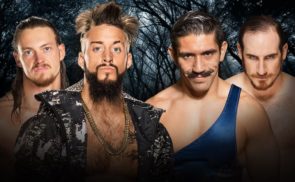 Original Plans For Enzo and Big Cass vs. The Vaudevillians at “Payback” Revealed 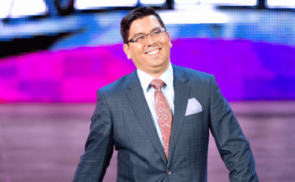