So it’s Thanksgiving and that means things are going to be a little different around here. Since Impact Wrestling is smart enough to realize that a TV show on Thanksgiving isn’t going to draw so well, this is going to be a special look at the second season of Wrestle House. In other words, it’s the wrestling version of a reality show, whose first season was a mixture of a lot of fun and near torture at times. Let’s get to it.

A rhyming narrator (sounds like James Mitchell) welcomes us to Wrestle House and we recap the first season, featuring a bunch of people who have not been around much lately. This ultimately led to Rosemary nearly marrying John E. Bravo, Tommy Dreamer, then a shooting at the wedding, an investigation, more Tommy Dreamer, the rise of Swinger’s Palace, the closing of Swinger’s Palace and then Bravo sending everyone here so Swinger can be happy.

The cast figures out they are on a reality show and Johnny Swinger goes on a rant about how bad this place in. Last time it was like Brutus Beefcake stabbing Cesar Romero on a Coliseum Video. Swinger tries to escape but sees his greatest fear: the ghosts of rizats past! Then he marches away like a Bushwhacker.

Everyone else wants to leave, but Rosemary says they have to stay until Swinger is happy. It doesn’t sit well that they are all here because of JOHNNY SWINGER. Does anyone here even like him? Then Chris Sabin comes out in a towel, much to Swingerella #1’s delight. People head off to find their rooms and Rosemary has an apple.

Back from a break and the cast, minus Swinger, tries to figure out how to make Swinger happy. Kaleb With A K makes reality show references no one else gets and here is Sabin again, complete with a lot of steam and in slow motion. Kaleb With A K calls him out on the slow motion/steam/towel/abs so a fight is teased, but John E. Bravo is told he can’t say MATCH TIME. They need a new catchphrase and Sabin’s “I Love This Match” will seem to do.

Chris Sabin vs. Kaleb With A K

Suddenly they’re in gear and Sabin dizzifies him with a bunch of armdrags. Kaleb With A K flips him over into the Rings of Saturn but it’s the Cradle Shock (in slow motion) to give Sabin the pin at 2:01.

Back in the house, Swinger is doing Tae Bo.

Now it’s time to cook but Madison Rayne freaks out because no one else is trying to escape. Decay says they have to leave for their Knockouts Tag Team Title match at Turning Point. Rayne doesn’t like this but Sabin, who walks down the steps in slow motion, though at least now wearing pants, has a match too.

We go to the living room, where Alisha Edwards and Rayne have a plan on how to get out of here. They have a tape, from the original Throwback Throwdown event (imagine if Southpaw Regional Wrestling had a full show). We see some clips of Julian Cummerbund vs. Downtown Daddy Brown (Ethan Page vs. Willie Mack) as the women try to explain what the heck this is. Swinger loves this stuff, so maybe seeing his old friends will make him happy.

A blindfolded Swinger is brought into the living room, along with a blindfolded Brown…and they’re ready to tear each other apart. Swinger tried to hook up with his daughter and that means it’s time for Brown to come out of retirement. Alisha: “A Downtown Daddy Brown match in 2021???” Swinger: “We can’t wait until 2021! Let’s do it right now!” Sabin comes in for the catchphrase and we’re on.

The match is in the morning, as Brown’s gout was acting up. Brown punches his way off of the ropes and Swinger is caught in the ropes like a see saw, as powered by Brown’s right hands. Swinger gets in a shot to the eye but Brown punches him out of the air (Bodhi: “BREADBASKET!”). The referee (Bravo) gets bumped so Swinger grabs Brown’s cane for a shot to the throat and a near fall. Brown is right back up with a jumping elbow for the pin at 3:43.

Swinger tells the cast that he’ll never cheer up and everyone is stuck here with him.

The non-Swinger cast is annoyed and Madison Rayne blames Rosemary for not blinking them out of here. Kaleb With A K busts out a roll of tape and it’s everyone who wants to stay vs. everyone who wants to go, with each team getting a side. A big tag match is set, but Alisha wants Eddie Edwards on her team. They snap him in, though he comes in from another room for the sake of an entrance. That means the cast sings his entrance song, which is quite the cute moment.

The former team wants to help Swinger and the latter wants out, with the winners getting their way. Alisha yells at Rosemary to start, earning herself a trip to the mat and some shots to the face. Havok comes in for a double right hand so it’s off to Madison, who gets screamed at.

Madison tries an Irish whip and is quickly flattened so it’s off to Steve, who slugs it out with Eddie. Steve grabs a suplex so it’s off to Kaleb With A K, who is run over by Taurus. Alisha comes back in and jumps the also legal Rosemary, but neither can hit a suplex. Eventually all ten are trying for the same suplex but it turns into five brawls. Rosemary finally spears Alisha down for the pin at 4:09.

Back in the house and Madison Rayne isn’t happy. Eddie Edwards gets a quick explanation of what is going on as Rosemary asks if Swingerella #1 has feelings for Johnny Swinger. Rosemary approves but they’re going to have to speak to someone.

Everyone is around the pool table when Swinger comes in. After some coaxing, Swingerella #1 introduces her boyfriend: Lawrence D. (the serious Larry D., from the first season). Swinger isn’t impressed and leaves, as we find out that this is Lawrence’s house.

The non-Swinger house has a new plan.

The plan seems to involve Locker Room Talk, with Madison Rayne bringing Swinger in as her co-host. Swinger is still sad though, as it’s hard being Johnny Parisi (his real name). He’s worried about a letter from McDevitt! Madison brings in the guest: Gene Simmons of KISS. Actually it’s the Demon, but Swinger doesn’t seem to know the difference. Swinger thinks the Demon is impersonating Simmons…who is clearly right here, because Swinger isn’t that bright. The Demon thinks Swinger needs to find true love and settle down, which gives Swinger something to think about.

Kaleb With A K wants people to use the confessional room.

Alisha and Eddie Edwards use the confessional room for married activities.

Johnny Swinger pops in to say that Eugene Simmons has told him to find love. Maybe it’s time for the Swingerella #1 to become his #1. Lawrence isn’t happy so Rosemary hits on him but Swinger is ready to fight anyway.

They trade kicks to the ribs to start before Swinger goes to the eyes. Lawrence runs him over and hits a backbreaker but dives into a raised boot. Swinger takes the strap down and hammers away but Lawrence hits the Best Hand In The Business for….two, as referee Bravo accuses Lawrence of using his cologne to cheat. The distraction lets Swinger throw powder in Lawrence’s face and hit the swinging neckbreaker for the pin at 3:35.

Post match Swinger grabs the fanny pack and pulls out….a bunch of stuff, capped off by a ring. Swingerella #1 says yes and the kiss ensues. Rosemary comes in to say no one is going anywhere until we get to the altar.

Back in the house, Alisha yells at Eddie and tells him to take this seriously. Swinger, in leopard print, comes in to ask Hernandez to be his best man. He says sure, but thinks there is something fishy going on. Alisha is taking charge of the wardrobe plans.

Hernandez overhears Rosemary and John E. Bravo discussing trading Bravo’s soul for an escape. That’s not cool with Hernandez, who gets caught in a match as a result.

The not so reluctant Bravo is the referee and Taurus jumps Hernandez from behind to start fast. A low blow rocks Taurus though and Hernandez comes back with shoulders and clotheslines. The Border Toss is escaped though and a Rosemary distraction lets Taurus grab a rollup for the pin at 2:29.

Post match Rosemary touches Hernandez’s head and makes him think of LAX, which seems to erase his memory.

Back in the house, Hernandez has no idea what any of this is and only remembers Swinger as the ECW guy.

Eddie Edwards overhears Rosemary and Bravo talking about exchanging his virgin blood for an escape. Decay scares Eddie off though.

Kaleb With A K seems to dump Swingerella #2 for Madison Rayne. Sabin comes in and says he’s married but would love to go with Swingerella #2 as friends.

It’s wedding time and yes James Mitchell is ministering. We go straight to the vows and Swinger brags about all of the women he has had over the years. Swingerella #1 reveals that her name is Brunhilde, so Swinger says we’ll stick with Swingerella instead. Eddie tries to break it up but can’t talk (presumably due to magic) so Hernandez translates and reveals the plan. Rosemary: “Oops, we did it again.” A bunch of people: “FREE BRITNEY!”

Rosemary says Bravo is ready to satisfy that virgin blood….but Bravo reveals that he isn’t a virgin anymore! Swingerella #1 reveals that she was the one who changed Bravo’s status, but Swinger is thrilled because you never marry a rizat. Bravo offers to marry her instead (Sabin: “I love this match too.”) and the vows are exchanged.

Everyone sits down for Thanksgiving dinner and Swinger is happy for being free from rizats past.

The narrator suggests there is more coming later to wrap it up. 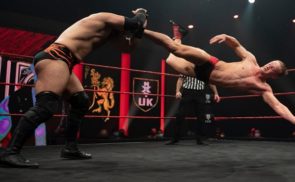 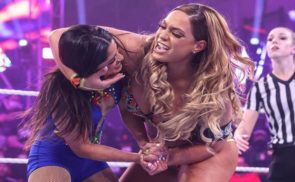