It’s the go home show for Rebellion and we should be in for a solid night. The card is mostly set with the World Title being more than ready, so now it might be time to focus on just about everything else. I’m actually looking forward to the pay per view and if they can get in one last push, we should be in for a nice Saturday. Let’s get to it.

Violent By Design vs. Decay

Non-title and it’s Eric Young/Deaner vs. Black Taurus/Crazzy Steve. Taurus hits Deaner in the face to start but Young gets in a cheap shot from the apron to take over. A running knee in the corner gives Deaner two but Taurus knocks him down and brings Steve in to clean house. Steve dropkicks Young off the apron and hits the Cannonball for two on Deaner, with Young dropping a top rope elbow for the save. Everything breaks down and Taurus is sent into the steps. The distraction is enough for Young to break a flag over Steve’s back, allowing Deaner to grab the DDT for the pin at 4:38.

Video on Moose vs. Josh Alexander, which has turned into something of an epic feud.

During the break, Tasha Steelz and Savannah Evans jumped Rosemary and Havok as they checked on the rest of Decay.

Here are the Major Players (Chelsea Green/Brian Myers/Matt Cardona) for a chat. We look back at the three of them combining to put W. Morrissey through a table last week before Cardona says it is appropriate that he is in the ECW Arena because he is the Deathmatch King. Now he and Myers think they need some tag team gold around here, with Myers saying that they’re on the same page now. Green talks about how they were all you could talk about on their own, and now they’re united.

Cue Guido Maritato and Tony Mamaluke, better known as the FBI in ECW, to interrupt. Guido rants about how the Major Players are disrespecting this building and thinks the shirt says MAJOR SISSIES. The FBI clears the ring and Guido wants a Digital Media Title shot RIGHT NOW.

Cardona is defending and gets taken to the mat to start. A fireman’s carry takeover has Cardona messed up so he bails to the floor, where he almost hits Green in the face. The distraction lets Guido get in a shot but Myers offers a distraction of his own, allowing Cardona to kick a rope low on Guido. Back in and Cardona gets a bit more serious with some choking and the Reboot. Guido fights up as well and hits the Sicilian Slice, only to have Myers offer a distraction. The low blow and Radio Silence finish for Cardona at 4:56.

Post match the table is loaded up but W. Morrissey runs in and…gets taken down by Green’s low blow. Jordynne Grace of all people runs in for the save and cleans house, allowing Morrissey to chokeslam Cardona through the table.

Honor No More is ready to win all of their matches at Rebellion and mock Bullet Club for a bonus.

Jonah talks about how he hurt PCO and now he’ll do the same to Tomohiro Ishii at Rebellion.

The toss into the corner sets up the Sher Kamur for the pin at 16 seconds.

Moose is ready to go and make a public apology but wants assurances that Josh Alexander won’t attack him. Scott D’Amore isn’t impressed but he’ll be at ringside anyway.

Honor No More vs. Bullet Club

Vincent/Matt Taven/Mike Bennett/Kenny King vs. Jay White/Good Brothers/Chris Bey here with the rest of Honor No More at ringside too. Anderson shoulders Vincent down to start and hands it off to Gallows to do the same. Bennett comes in to get punched in the corner but avoids an elbow, allowing White and Taven to come in.

Taven dropkicks him down but spends too much time saying his name, allowing White to hit a chop. King comes in to trade missed dropkicks with Bey, with the latter being knocked into the corner. A Bennett brainbuster plants Bey and Taven gets two off a neckbreaker. Taven misses a charge though and the hot tag brings in Anderson to really clean house. Honor No More is sent outside and we take a break.

Back with Anderson and Bennett knocking each other down, setting up the double tag to White and Vincent. The spinning suplex gives White two but Vincent is back with a Russian legsweep for the double knockdown. The hot tag brings in Gallows to clean house as everything breaks down. Bey hits a big running flip dive to the floor, leaving Bennett to get Gun Stunned into the Magic Killer for the pin at 12:48.

Steve Maclin is ready for Chris Sabin and Jay White at Rebellion because he is in a club of his own (meaning the military).

The IInspiration were having a signing earlier before stopping to talk to the camera. They’re glad that Kaleb With A K is gone, as now they can get the Knockouts Tag Team Titles back.

Taya Valkyrie is back for the Reina de Reinas Title, and maybe to shut Deonna Purrazzo up a bit.

Austin forearms Miguel in the face to start and goes after his arm to limited avail. Bailey comes in to run the ropes with Kid, who sends him outside for a heck of a suicide dive. Back from a break and it’s Austin driving a shoulder into Kid’s ribs in the corner. Kid fights up and strikes away though, allowing the hot tag off to Miguel.

Everything breaks down and Kid’s springboard is broken up with a kick to the head. Bailey and Austin hit their stereo running flip dives but Miguel is back up to kick them both down. Back in and Bailey spends too much time setting up a kick and gets dropkicked down. That leaves Austin to load up the Fold, which is countered into a rollup to give Miguel the pin at 9:25.

Vincent excuses himself from an Honor No More huddle so he can go find some jumper cables. He finds PCO and electrocutes him back to life, because PCO is not human.

Here is Moose, with his lawyer RD Evans, for the public apology. The statement, to Josh Alexander’s family, is rather formal and includes some information about Moose’s title reign. That’s not good enough for Moose, who cuts it off and wants a better apology. He is sorry that he exposed Alexander as a horrible father and husband, plus for the beating that Alexander is getting at Rebellion. Moose isn’t sorry for sending Alexander home for more than a month. Then Alexander is going to beg Moose to come to his home and show his wife and son what a real man is.

Cue Alexander for the brawl with Moose, who gets in a cheap shot to set up a chokeslam. The table is set up at ringside but Moose takes too long, allowing Alexander to hit the C4 Spike through said table to end the show. 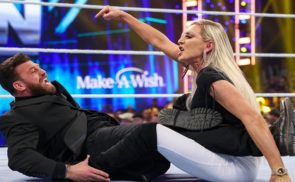 Not So Fast: WWE Star May Be Shifting Into New On-Screen Role