We’re still in the first round but since this tournament is structured rather well, we’ll be done with it next week. This show has become a very refreshing change of pace with nothing but wrestling and almost no storylines. I know that wouldn’t work long term but it’s really fun in the short version like this. Let’s get to it.

We look at tonight’s four matches.

Tyson Dux used to wrestle in WWE and then destroyed his knee.

Canada vs. England. The fans are entirely behind Sabre here as he takes Dux down by the leg. Bryan talks about Sabre being well educated in the art of escapology, meaning he knows how to get out of every possible hold. Sabre keeps spinning around from one body part to another with some quick movements, each one frustrating Dux even more. You can almost hear Bryan drooling over every single thing Zack does.

Dux tries to grab a headlock but gets caught in an armbar on the mat. A slam and some chops stagger Sabre a bit but he comes right back with European uppercuts. Some kicks to the arm only seem to tick Dux off and he grabs a fisherman’s buster.

Dux puts on a Fujiwara armbar but Zack gets to his feet and grabs an octopus hold. Tyson gets the ropes so Zack hits a running kick to the chest for two. A quick DDT gets two for Dux and he clotheslines Zack’s head off. Sabre comes right back with a Kimura before taking him down into something like the YES Lock but he bends Dux’s fingers back for the submission at 9:23.

Drew Gulak is a submission expert from Philadelphia.

Harv Sihra was inspired by Eddie Guerrero to embrace his heritage.

America vs. India. Sihra is part of the Bollywood Boys and his brother is also in the tournament. They’re quickly on the mat with Gulak grabbing a bodyscissors, only to have Harv tie the legs up to send Drew crawling to the ropes. The fans didn’t seem to see what was going on though and there wasn’t much of a reaction. Gulak comes right back with a middle rope clothesline for two, only to be backdropped to the floor. Harv gets in a twisting cross body to the floor and grabs a superplex back inside. With Gulak down, Harv goes for the ankle but gets caught in a dragon sleeper for the tap out at 5:24.

Anthony Bennett is from Philadelphia and has very large hair.

America vs. America here and Bennett’s hair has its own sunglasses. Bennett dances around to start and Nese will have none of that nonsense. They head outside with Bennett hitting a quick cannonball off the apron but is easily taken down for a springboard middle rope moonsault. A suplex plants Bennett, who pops back up for a dropkick. Bennett’s guillotine choke doesn’t get him very far so Tony slams him again….and the referee stops the match to check on him. We get the all clear and Nese hits a 450 for the pin at 6:33.

Raul Mendoza grew up idolizing Eddie Guerrero who was small but became champion.

Brian Kendrick is here to get his second chance.

America vs. Mexico. Kendrick is looking very skinny and you can see a lot of his bones here. They trade leapfrogs to start with Kendrick being sent out to the floor. Back in and Mendoza slaps on something like a reverse Texas Cloverleaf, only to swing Brian around before taking him down into a leglock on the mat. Cool indeed. Kendrick suckers him in for a big boot before putting Mendoza’s mouth on the ropes, which he then kicks for good measure.

Mendoza is bleeding from the mouth but quickly says he’s ready to continue. Raul comes right back and sends him outside for a flip dive, only to miss a springboard 450 back inside. A big running kick to the face drops Raul but Kendrick takes too long getting up top, allowing Raul to crotch him into the Tree of Woe. Mendoza goes way big with a Coast to Coast dropkick but a backbreaker only gets two. We get some old school goldbricking as Kendrick fakes an injury, only to pull Mendoza down into a choke (apparently the Bully Choke) for the submission at 7:35. 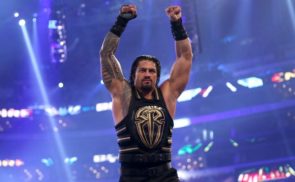 Rumor: WWE is Done Pushing Roman Reigns As a Top Guy “For The Time Being”