We’re less than a month away from Death Before Dishonor and it should be interesting to see how much ROH can cram into the card in the next few weeks. I mean, there’s always the possibility of bringing the New Japan guys in again as they haven’t been around in a full week at this point. Let’s get to it.

This is fallout from Best In The World where Kamaitachi attacked White (a New Zealander), who was in the crowd. White’s name isn’t even mentioned in the clip they show. Kamaitachi is part of the Addiction (the New Japan contingent) and has Christopher Daniels in his corner. White is a New Japan Dojo graduate making his ROH debut.

Kamaitachi jumps him to start and a running shoulder to the ribs puts White on the floor. They trade whips into the barricade and Daniels adds a clothesline to really cheat. Back from a break with Kamaitachi working on the leg with a modified figure four.

White escapes and hits a brainbuster but can’t nip up. A missile dropkick gets two for Jay but Kamaitachi hits a release Falcon’s Arrow. Double knees from the top rope get two on Jay and a swinging Rock Bottom gets the same on Kamaitachi. Daniels’ interference doesn’t quite work as Jay sends Kamaitachi into him, setting up something like a lifting Cradle Shock (Chris Sabin’s old finisher, called the Kiwi Crusher here) for the pin at 10:25.

The Addiction beats White down until the Motor City Machine Guns make the save. Sabin wants to make it a six man tag right now and McGuinness says ring the bell.

The bell rings and we take a break five seconds later with no one even in the ring yet. Back with Sabin getting double teamed followed by a tilt-a-whirl backbreaker from Daniels. Kamaitachi hits a running basement dropkick before it’s off to Kazarian for a front facelock. Everything breaks down for a little bit and the hot tag brings in White for some running clotheslines. A powerslam gets two on Daniels and the Guns start in with some of their signature stuff, including the bridging neck crank into the running dropkick. With everyone else on the floor, White hits a sitout powerslam to pin Daniels at 9:10.

The Bullet Club is tired of everyone running from Adam Cole, who promises that Kyle O’Reilly will never be ROH World Champion.

Taylor and Lee are two monsters in suits who attacked War Machine at a recent show in Columbus. Anthony is sent outside early on and it’s time for the loud chops. A pop up sitout powerbomb sets up a middle rope splash (Senmetsu, Japanese for annihilation) crushes Andrews at 2:00.

War Machine comes out for the brawl with Lee, who probably goes about 350lbs, hitting a huge flip dive over the top to take everyone out.

Quick preview for Jay Lethal vs. Kyle O’Reilly for the World Title next week. Both of them want to prove that they’re the best in the world.

Here’s BJ Whitmer to brag about beating Steve Corino at Best in the World. He’s accompanied by Kevin Sullivan, in a purple wizard robe, who cost Corino the match. Whitmer says tonight is about Steve Corino’s questions. This started back in 2013 when Whitmer was sitting at home with a broken neck.

Sullivan approached him to carry on the legacy of evil that was started by King Curtis Iaukea and was supposed to be handed on to Corino and Whitmer. That wasn’t good enough though because Corino wanted it all for himself. Chaos is going to reign over ROH and all that matters is who will be causing that chaos to come. This chapter is over but the book has yet to be finished.

There’s no real hiding the fact that this is Strong’s farewell match. Strong is taken into the corner to start and Castle tells him to bring it. Castle puts him on the mat and slams him for good measure. Now it’s Strong taking him to the mat as this is still in first gear. We take a break and come back with Castle being kneed off the apron, meaning it’s time for some fanning. Strong lays out the Boys and you just don’t do that to Castle.

Dalton’s fire is quickly extinguished with an Angle Slam into the post and both guys are down on the floor. Back in and some suplexes have Strong in trouble but he comes right back with a belly to back faceplant. Castle throws him down with a backdrop and some suicide dives send Strong into the barricade. The bridging German suplex gets two for Castle followed by more suplexes for the same. Dalton charges into a jumping knee to the face followed by a superplex and the Sick Kick for two. Back up and Strong charges into the Bang A Rang for the pin at 13:44. 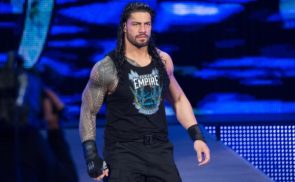