Tonight is a special show as they’re moving (again) to Thursday nights (again). There’s also a big rematch with Eddie Edwards vs. Lashley with both titles on the line inside a cage. It’s been a long time since there was a cage match in TNA (like a full three weeks or so) and that means it’s fresh enough. Let’s get to it.

We open with Jeff Hardy standing on a hill thinking about his motorcycle crash. Matt comes up to tell him he’s broken Brother Nero’s spirit. He eggs Jeff on until he gets on the motorcycle again, which Matt says he saw Jeff doing in a premonition. Jeff goes to jump and we cut to the arena.

Here’s Lashley to the ring to talk about how he should be the X-Division Champion after what happened last week. He’s not cool with someone like Moose coming to his ring and messing up his match because he doesn’t put on a helmet when he gets in a ring or in a cage. Moose needs to get out here right now and have a fight. Instead he gets Mike Bennett, who says Lashley has something he wants.

Bennett is going to go through the entire Bound For Glory Playoff until he gets what he wants because of this big man right here. Lashley wants to fight so Moose slowly comes down to the ring, only to have Eddie Edwards jump Moose from behind. The brawl erupts until Dixie Carter comes out to say cut it out because Mike and Moose are barred from ringside in the main event.

Matt Hardy and Reby come out (second segment with them in ten minutes) to show us clips of Jeff crashing his motorcycle. That means it’s BROKEN, just like Jeff will be. Back in the arena, Matt and Reby have Vanguard 1 play Jeff’s new music, which keeps calling him OBSOLETE in a computerized version of Matt’s singing voice. Also Jeff’s name graphic now says Brother Nero and his Twitter handle is obsoletemule.

This is a tournament for the World Title shot at Bound For Glory, which TNA only kind of explained. Jeff is banged up from the motorcycle accident earlier today and can barely move. Mike takes him to the mat with a Fujiwara Armbar as the announcers talk about Jeff being fined $5000 every time he uses his own name since it’s Matt’s intellectual property. A cutter puts Jeff away at 2:08. This was barely a match.

Josh: “It’s like Matt is torturing his brother Jeff.” Thank you for clearing that up buddy. Storm punches him out to the floor to start and whips Matt into the steps. Storm drives the Boozer Cruiser into him and we take a break. Back with James sitting on the steps with Matt in the crowd and biting Storm’s hand. Storm fights back and hits a quick Closing Time inside, only to have Reby hit him in the leg with a hammer. The Twist of Fate advances Matt at 9:30.

Moose implies he’ll interfere but Mike tries to keep him backstage so they don’t get fired.

Here’s Ethan Carter III with something to say before his match. He goes to the steps (“Ethan’s Corner”) to say we’re talking about playoffs (complete with a Jim Mora impression for you NFL fans) where he can get to the top of the mountain for a third time. This brings out Drew Galloway who says (in some bad audio) that the real question is which of them are better.

Ethan may be great but his last name is Carter. He came here because his aunt runs this place. It wasn’t the same for Drew because TNA came to him. It turns out that they can meet in the finals and Ethan likes the sound of that. Drew wants to fight now but Eli Drake cuts them off. Drake says he’s looking at dummies and wants to hear YEAH when he says dummy. Eli: “Dummy!” Fans: “YEAH!” Eli: “I WASN’T TALKING TO YOU!”

Non-title. Carter grabs an armdrag into an armbar before dropping an elbow with a shout of EC3. Drake comes back with a jumping neckbreaker and we hit the neck crank. Carter fights back and hits a quick backdrop. The TK3 gets two and Ethan heads up but Drake rolls through a high cross body for two. Blunt Force Trauma is countered into a rollup to send Carter to the semi-finals at 7:47.

Matt and Jeff are in the back with Vanguard 1, who Matt has catch him up on the tournament. Apparently Matt will be facing Ethan next week.  We aren’t allowed to see Vanguard 1’s keys to victory so Matt has it take down the camera feed.

Allie tries to get Maria to meditate before Maria’s state of the Knockouts address.

The Knockouts division (including Allie to get us to seven) is in the ring as Allie introduces Maria for the address. The boss says they can air their grievances so everyone raises their hand. Allie starts by asking how you can be more like Maria. Apparently it’s just believe in her vision so Jade cuts Maria off to ask why she hasn’t gotten a one on one rematch for the title.

Gail wants to know the same thing but also wants to face Maria one on one. That broken hand looked just fine last week so what’s the next excuse? Sienna gets in Gail’s face and tells her to stop being so selfish and making it all about her. Maria makes Gail vs. the entire division with the person taking her out being handsomely rewarded. Jade says she’s out and gets in a fight with Marti. Madison jumps Gail from behind, saying she’s looking out for herself.

Bram is getting ready when Rosemary comes up to him.  She wants Bram to win but only for himself.  Rosemary offers her help tonight and they kiss.

The Tribunal beats Mahabali Shera down.

Bound For Glory Playoff First Round: Drew Galloway vs. Bram

No Rosemary. They slug it out to start and Bram bails from the threat of a Futureshock. Drew sends him outside but eats a spinning kick to the head. Back in and Drew still can’t get Futureshock so Bram punches him into the corner and gets two off a good looking powerbomb. Drew fights back up and avoids a charge, setting up the Futureshock to advance at 6:55.

We see a preview for next week’s show but the graphic says “tonight”. That’s the second time in three weeks they’ve screwed up something like that.

Mike tries to intimidate Drew about their match next week but Drew doesn’t bite.

Pinfall or submission only. Title for title inside Six Sides of Steel and there’s no Davey Richards here. Also if Bennett or Moose interfere, Bennett is fired. Eddie dives through the cage door to take Lashley out before the bell. Lashley throws him into the barricade and then into the cage for the opening bell. A neckbreaker puts Eddie down and his hurricanrana attempt is countered with a powerbomb into the cage as we take a break.

Back with Lashley getting two off a suplex and grabbing a chinlock. A torture rack doesn’t work as well but Lashley cuts off the comeback with a spinebuster. Eddie finally realizes they’re in a cage and whips Lashley into the steel a few times. Edwards tries to get to the top but has to hurricanrana Lashley down to break up a powerbomb attempt. The Boston Knee Party gets two so Lashley just throws him into the cage door.

The spear drives Edwards onto the floor (remember it’s pin or submission only) and Lashley follows him to grab the World Title. Eddie is back up for another Boston Knee Party to send the belt into Lashley’s face but it’s only good for two. So much for that finisher meaning anything. Eddie goes up again but Lashley shakes the cage to set up a superplex and a big crash. Two spears make Lashley a double champion at 19:11.

Lashley shoves Eddie away post match so Ethan comes out for the save. That brings out Matt followed by Mike and Moose for the big brawl to end the show. 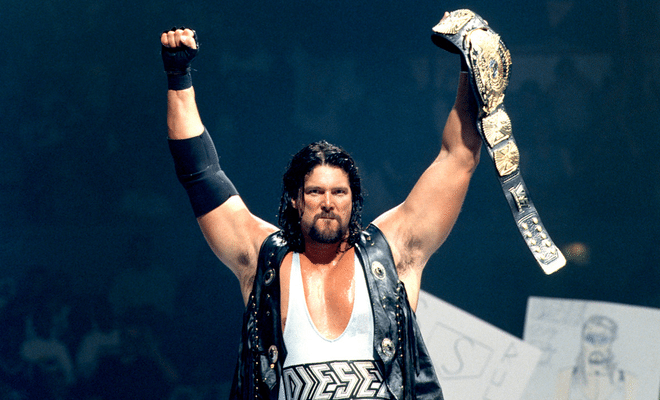 The New Day’s Booty O’s Cereal is Actually Real, You Can Buy It!