The great ones stick together. The WWE has been around for a very long time now and they have quite the history to pick from. Several of their legendary wrestlers have been around for decades and a great number of them have been enshrined in the Hall Of Fame. WWE enjoys bringing those people back for one reason or another and that was the case again this week.

This week’s edition of SmackDown was billed as the Season Premiere and featured quite the amount of pomp and circumstance. FOX aired a special Kickoff Show before the event started, featuring various celebrities and famous wrestlers. Some of those wrestlers were around on the regular show too, and several of them had quite the special seat to watch the show.

Multiple WWE Hall Of Famers appeared during this week’s SmackDown, though none of them were in person. Each of them appeared virtually as part of the Thunder Dome’s digital crowd. Over the course of the night, Jeff Jarrett, Brie Bella, Ric Flair, Goldberg and Mark Henry all appeared. All were acknowledged on camera, with Daniel Bryan saying hello to Bella during his segment.

They saw a nice show too. Check out what went down on Friday:

Opinion: This is the kind of thing that always makes the show feel bigger, though I get a little nervous anytime Goldberg is out there. You could always be just one low television rating away from seeing Goldberg getting another six week World Title reign. That would be horrible to see at the moment given how well Roman Reigns has been doing, but it is always a possibility.

What did you think of the segment? Which Hall of Famer should get more television time? Let’s get to it. 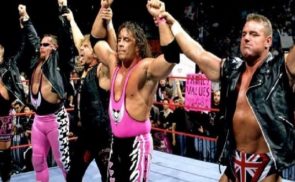