I don’t know why, but something tells me they are going to have a hard time following FTR vs. the Bucks from Dynamite. That being said, they are certainly amping up Rampage this week, as Bryan Danielson and Jon Moxley will both be in action on the show. I’m thinking that’s enough to carry things so let’s get to it.

William Regal is on commentary and it’s a feeling out process to start and they go to the mat. A shot to the face drops Danielson, who seems to get how things are going to go here. Danielson gets a boot up in the corner and grabs a guillotine choke, with Beretta suplexing his way to freedom. Beretta sends him outside but the switch places, only to have Danielson’s suicide dive pulled out of the air. Danielson sends him into the steps and we take a break.

Back with Danielson suplexing him over and busting out some jumping jacks. A reverse capture suplex gives Danielson two and it’s off to the cravate with knees to the face. Trent slips out and tries Strong Zero but has to settle for two off a sunset flip. Danielson misses the running knee in the corner, allowing Beretta to hit the tornado DDT for two.

Trent goes up top but gets crotched, only to reverse Danielson’s belly to back superplex into a crossbody for two more. A half and half suplex into a running lariat gets another two on Danielson, who is right back up with the running knee. The Gotch style piledriver into some stomps to the face set up the LeBell Lock to finish the unconscious Trent at 13:38.

Hook has nothing to say but Danhausen pops out of a trashcan to curse him again. Hook walks away again, but this time Danhausen eats Hook’s chips, thinking they might be the source of his power.

Here are the Men of the Year for a chat. Scorpio Sky says he has dropped the Open Challenge because he wants to do the right thing. No one has beaten him in 394 days but here are Sammy Guevara and Tay Conti to interrupt. They call Lambert a piece of s*** sexist, which translates to Dan Lambert in Portuguese.

Lambert doesn’t like hearing about what the two of them do in their bedroom but Sammy wants a match. Ethan Page doesn’t think much of the idea and hopes his daughter doesn’t want to be like Tay. Sammy says they’re going to do this every week until they get their match and wait to see what they have planned for next week.

Based on his tastes in colognes and BMW’s, QT Marshall is Chris Jericho’s Sports Entertainer of the Week.

Marshall shoulders him down to start and does Swerve’s pose. Back up and Swerve grabs a headscissors and rolls into a jackknife cover for two. Marshall throws him over the top but Swerve sticks the landing as we take a break. Back with Strickland hitting a running forearm into the middle rope elbow between the shoulders. A pop up right hand rocks Swerve but he blocks the Diamond Cutter and kicks the knee out. The rolling Flatliner sets up the House Call for the pin at 6:05.

Willow grabs a rollup to start before taking Velvet down with a shoulder. Velvet comes back with some shots to the face in the corner. Nightingale runs her over again but misses a moonsault, allowing Velvet to strike away. Some running knees to the back rock Nightingale and Just Desserts gets two. Back up and Willow hits the Pounce, setting up the Cannonball for two more. Velvet manages to kick her away though and a spinning kick to the head finishes Nightingale at 5:19.

Tony Nese isn’t happy with the lack of enthusiasm for his introduction and wants to know when he’s getting some respect. Mark Sterling comes in to offer some legal representation and Nese seems intrigued.

Wheeler Yuta talks about getting closer and closer to defeating Jon Moxley and tonight he’ll do it. Moxley promises to wreck Yuta because this is a fight instead of Pure Rules.

Yuta’s ROH Pure Wrestling Title isn’t on the line. Yuta gets smart and dives off the steps to take Moxley down during his entrance for a fast start. They fight into the crowd with Yuta keeping control until Moxley snaps off a suplex back inside. The bell rings and Moxley hits another suplex to put Yuta in trouble. Some chops don’t get Moxley very far as Yuta comes back with an atomic drop. Yuta is sent to the floor and into the steps as we take a break.

Back with a bloody Yuta getting to the ropes to escape a Boston crab and striking away. Moxley is sent outside for the big splash through the announcers’ table. Back in and Yuta grabs a backslide for two before hitting the Bryan Danielson stomps. Some German suplexes into a top rope splash sets up the Crossface but Moxley slips out. The King Kong lariat gives Moxley two and he bites at the cut. Yuta goes up top but dives into the Paradigm Shift for two, which leaves Moxley absolutely stunned.

The bulldog choke is broken up but Yuta misses the running boot, allowing Yuta to grab his own bulldog choke. Moxley escapes as well so Moxley hits the hard elbows, setting up the Regal running knee. A spike Paradigm Shift gets two more so Moxley grabs a choke and Yuta is out at 12:39.

Post match Moxley looks stunned at Yuta being that tough. Bryan Danielson and William Regal come in, with Yuta saying bring it on. Yuta pulls his fist back but Regal extends a hand. The handshake ends the show. 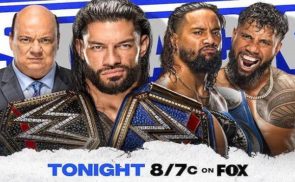 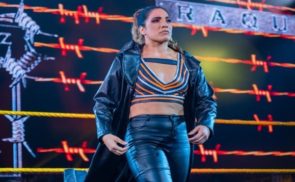 Raquel Gonzalez Has A New Name On Smackdown