It has to be done. Last year, AEW Dynamite debuted on TNT, immediately changing the wrestling landscape around the world. AEW became one of the most important wrestling companies anywhere and a lot of that was due to their television deal. That is the good part, but there is also a bad part to go with it, which will be on display during the next few weeks.

One of the major perks of being part of a network like TNT is getting to be on in prime time. The network is available in most houses with cable in the country and that means other major sporting events are going to air there as well. However, there are going to be some drawbacks to the situation as well, such as more mainstream sports getting priority over AEW, which will be the case soon.

During this week’s edition of AEW Dynamite, the company announced that the television December 23 edition of the show will be delayed by the NBA On TNT coverage. The show will still air that night, though it will be taking place after the NBA game. In addition, the following two weeks, meaning the December 30 and January 6 editions, will be the two halves of the New Year’s Smash special, with Snoop Dogg guest starring on the latter show.

This week’s show was big enough. Check out its important moments:

Opinion: This is the kind of thing that has to happen, though I’m not exactly wild on the idea of staying up to nearly midnight on the night before Christmas Eve to watch the show. I can understand why the show has to take place, but at the same time it can be a little much to be up that late. Still though, the New Year’s Clash shows sound interesting so hopefully they live up to the hype.

What do you think of the changes? How will New Year’s Clash go? Let us know in the comments below. 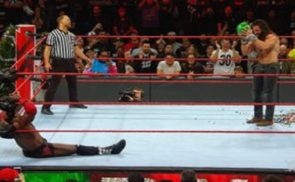