It is always a possibility. Wrestling is a rather dangerous sport by definition as you never know when you are going to see someone get hurt. The problem is you never know how badly someone might get hurt at any given time and that is the kind of thing that makes things all the more dangerous. That danger was realized recently and it could mean a long layoff.

This weekend saw NXT present its annual Takeover: WarGames, featuring a pair of the show’s namesake matches. WarGames takes place inside a pair of rings surrounded by one huge cage and often involves various weapons being included. That is the kind of match that screams violence and carnage, which means that injuries are a rather real possibility. Now they are quite the reality.

This week on NXT, it was announced that the Undisputed Era’s Bobby Fish suffered a torn tricep during the WarGames match. Fish has already undergone surgery to repair the injury but it is not clear how long he will be out of action. The injury, including a shot of the scar from the surgery, was announced during a video on the violence and injuries that are possible during a WarGames match.

It was pure carnage. Check out the video on WarGames:

Opinion: This is the kind of thing that is always a possibility but it does not make things any better. Fish is a valuable piece of the Undisputed Era but he is also in his early 40s and probably does not have the longest career left. Hopefully he gets to come back sooner rather than later, as the Undisputed Era is not quite the same when there are only three people involved.

What does this mean for the Undisputed Era? What should Fish do when he gets back? Let us know in the comments below. 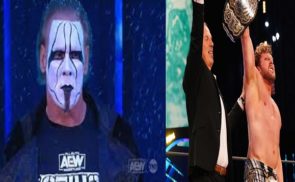