We’ll wrap up another year of Dynamite with this one, in the place that hosted the show for what felt like the better part of ever. Cody Rhodes it the new TNT Champion, which hopefully is not just for the Go Big Show or Rhodes To The Top. Other than that, we also have the welcome return of Jim Ross, who has announced that he is cancer free. Let’s get to it.

Jim Ross gets a big entrance for his return, which is a great thing to see.

Wheeler takes Christian into the corner for a clean break so we hit the double bicep pose. Christian works on the arm for a bit so it’s off to Harwood to trade chops with Jungle Boy in the corner. Harwood gets caught in the wrong corner and it’s Christian coming in for a kick to the face. The jump over the top into the uppercut has Harwood rocked and Wheeler has to break up the Snare Trap.

It’s off to Kassidy but the Lucha Bros come in for the wheelbarrow splash. Jungle Boy adds a springboard onto Kassidy and then sends him over the top, only to have Quen take Jungle Boy down. Hardy is in with the Side Effect and it’s Jungle Boy in trouble in the corner. A catapult sends Jungle Boy into the buckle and he has to fight out of Hardy’s chinlock.

Back up and a heck of a clothesline drops Hardy and it’s back to Fenix to pick up the pace. Private Party hits a pretty sweet assisted flip DDT to plant Fenix for two but he’s able to shove FTR off the top. A heck of a double springboard moonsault takes FTR down and it’s off to Luchasaurus to clean house. Kassidy gets launched into the air and lets out a high pitched scream.

The double chokeslam is broken up so Luchasaurus kicks Wheeler in the face. The chokeslam hits Harwood but Penta tags himself in, much to Luchasaurus’ annoyance. Everything breaks down, including Fenix hitting a crazy rope work corkscrew dive, but Christian tags himself in to break up the Fear Factor. FTR shoves them together though and it’s the Big Rig to finish Christian at 12:35.

Kingston goes right after Garcia and it’s a big brawl on the floor in the first minute. Back in and we settle down to Ortiz vs. Jeff Parker, with the former taking over. Garcia comes in and teases wanting Kingston but gets Santana instead. Three Amigos have Garcia in trouble so it’s back to Ortiz, who gets caught by a kick to the face on the floor. We take a break and come back with Kingston getting the tag to rapid fire chop Garcia in the corner. Everything breaks down and Lee blocks Ortiz’s splash with raised knees, setting up a rollup with tights to give Lee the pin at 9:50.

Post match Garcia hits Santana in the face with the ring bell. Cue the returning Chris Jericho for the late save. Kingston shoves Jericho away and says he doesn’t need the help. Ortiz has to play peacemaker.

Maxwell Jacob Friedman talks about unsafe working conditions involving that crazy dive last week, while suggesting that it wouldn’t happening a more professional company. We’ll worry about that later though, because Wardlow needs to quality for the Face of the Revolution ladder match. That way he can win the TNT Title and hand it over to MJF, as their contract says. Wardlow isn’t happy.

Christian Cage isn’t happy with the Lucha Bros so the challenge for the Tag Team Titles is set for next week. The response is some insults to Cage, plus an acceptance.

The Young Bucks don’t seem to like Kyle O’Reilly, who wants to talk to Adam Cole in private. This includes Bobby Fish leaving so O’Reilly can ask if Cole has his back or not. Cole doesn’t seem happy.

Here are Dan Lambert and the Men of the Year to rant about Cody Rhodes. Lambert doesn’t think much of Cody but thinks even less of Brandi Rhodes. Stripper jokes abound, with Ethan Page mocking her wrestling abilities as well. Cue Brandi, who uses the same lines that she used on Jade Cargill during her debut. They don’t like each other, with Brandi being ready to beat him up (without having him pay for it) but Lambert, a black belt in Brazilian jiu-jitsu, isn’t worried and makes stripper jokes. Brandi: “Well I’m a black b****!” Dustin Rhodes comes in for the save and gets laid out, with Brandi checking on him.

Video on Bryan Danielson vs. Hangman Page II, with a focus on the still unnamed judges.

Mark Sterling is here with Cargill and Rosa has Wolverine claws. Rosa goes after Cargill’s leg to start but a Sterling distraction lets Cargill take over on the floor. Some kicks to the leg get Rosa out of trouble but she dives into a backbreaker. Rosa snaps off a hurricanrana but gets posted hard. They finally get back inside, where Rosa shrugs off some knees to the face and hits a dragon screw legwhip. Cargill runs her over again though and we take a break.

Back with Rosa hammering on the knee in the corner and hitting some running clotheslines. Cargill Samoan drops her down again but bangs up the knee on the nip up. Rosa is right back to the leg with a shinbreaker into the Figure Four but Sterling offers a distraction. The hold is put on again but this time, Cargill kicks her into the corner, where a crew member hits her with a kendo stick. A fast Jaded gives Cargill the pin at 11:00.

Post match Rosa goes after Cargill again but it’s Mercedes Martinez as the crew member for the save and beatdown. Ruby Soho runs in with a pipe for the save.

Video on Riho vs. Britt Baker for the Women’s Title.

Here is CM Punk for a chat, but first he wants to say how glad he is to have Jim Ross back. With that taken care of, Punk talks about how he has never been here before, but it makes him think about Brodie Lee. If anyone out there has to say something about how Lee didn’t do anything, it means they didn’t meet him. Punk watched the tribute show to Lee and it made him want to come here.

Maybe there is someone who isn’t worth his time and doesn’t want to be here, like MJF. Punk talks about last week’s six man tag and now MJF says he’s done with him. That’s fine with Punk after he got to team with Sting to beat FTR and now they can move on to something else. MJF was talking about it too: they both want the World Title and MJF is a bigger waste of Khan Money than Tim Tebow….and we’ll pause off that one.

Punk never wanted to mess with MJF but on this mic and in this ring, no one can touch him. If MJF wants to climb that ladder though, Punk will see him in this ring, but it would be a shame if someone interfered with his quest for gold.

We look at Cody Rhodes taking the TNT Title from Sammy Guevara.

Here is Sammy with his signs and we take a break, as is usually the case.

Here is Brian Pillman Jr. to talk about Malakai Black trying to end Griff Garrison’s career. Then he remembered getting kicked in the head to leave him laying. Pillman worked hard to get here and started in Jacksonville, Florida. He didn’t know his father, but he knows he only gets one life and Black isn’t getting it. Next week, you’re seeing a brand new Brian Pillman Jr…and there go the lights. Malakai Black pops up on the ramp and then disappears again.

The Acclaimed complains about how they aren’t ranked but Sting and Darby Allin are. That’s why Anthony Bowens is taking care of Allin on Rampage.

Sting talks about how casual people are about main events these days. Allin says he’s fine with being in any match on the card and is ready for Bowens on Friday.

Video on Tay Conti/Anna Jay vs. Bunny/Penelope Ford, setting up their street fight on Rampage.

Taylor and O’Reilly start things off with O’Reilly kneeing him in the ribs. Trent comes in to strike away with O’Reilly, including stereo boots to the face for a double knockdown. Cassidy comes in and rolls Fish up for two so it’s off to Cole, who gets taken down a few times. The Paisan elbow brings O’Reilly and Fish in, only to be sent outside. Cole breaks up the big hug though and the good guys are sent outside.

We take a break and come back with Cole superkicking Cassidy off the apron but everything breaks down instead. Trent tornado DDT’s O’Reilly for two but Fish comes back in to send Trent into the corner. Some running strikes connect but Trent manages a knockdown of his own. The hot tag brings in Cassidy but a DDT into a wheelbarrow suplex gives O’Reilly two. Cassidy gets taken down with a High/Low but Chuck makes the save.

They fight outside, where the Panama Sunrise on the ramp is countered with a backdrop. Taylor flip dives onto O’Reilly and Fish, leaving Cole to get speared down. Back in and Cassidy’s top rope DDT gets two on Cole, setting up back to back piledrivers. Beach Break gets two, with O’Reilly and Fish making the save. O’Reilly kicks Cole by mistake though and it’s back to Taylor for a knee to O’Reilly’s face. Soul Food into Trent’s half and half suplex sets up the big hug but here is Brandon Cutler to offer a distraction. The Young Bucks run in with double superkicks and Chasing the Dragon finishes Chuck at 14:55.

Cole stands with the Young Bucks and Cutler, leaving O’Reilly and Fish unhappy to end the show. 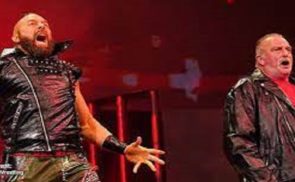 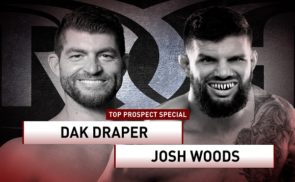