It’s time for one of those things that you don’t get to see very often in WWE, as we’re getting a contract signing between Carmelo Hayes and Roderick Strong. Other than that, odds are we’ll be hearing a lot more from Grayson Waller, because he is on this show as much as a Steve Austin Raw in 1998. Let’s get to it.

Here is Grayson Waller to get things going. Waller flips around a lot and talks about having a great Christmas. This included flying himself to Detroit to Monday Night Raw, where he met AJ Styles. We see a clip of their showdown last night, before Waller talks about how he is supposed to face Dexter Lumis tonight. That isn’t going to happen, so he insults Indi Hartwell too. Cue the returning Odyssey Jones and we have a replacement match.

Jones throws him around to start and then steps on Waller’s back. A big side slam gives Jones two and we take a break. Back with Waller hitting a low superkick and a middle rope elbow gets two. Jones fights up but misses a charge into the corner, allowing Waller to hammer away. Waller grabs the buckle to block a powerbomb….but the buckle pad comes off so the powerbomb gets two. That means Jones can miss a charge into the buckle, allowing Waller to hit his rolling Stunner for the pin at 7:36.

Post match, AJ Styles pops up to say he’ll be here next week.

Raquel Gonzalez and Cora Jade both want to fight Mandy Rose, but here are Io Shirai and Kay Lee Ray to say they want to fight her too. Rose just happens to pop up on screen behind them and says she’ll get a tag match made for tonight, with the winning team getting to challenge her in a triple threat at New Year’s Evil.

Grayson Waller isn’t happy with AJ Styles interrupting him and runs into MSK. They can shut up.

Here is MSK for a chat. They haven’t been here since Halloween Havoc, which wasn’t a great night. No one gets higher than them, but here is Riddle on screen to say he is with them in spirit. That’s enough for them to call out Imperium, as they had planned to do. Cue Imperium to shout in their respective languages, which does not sit well with MSK, who want subtitles.

Imperium insults them in English, so MSK issues the challenge for right here and right now. That’s too far because Walter pops up on screen, saying that he is proud of Imperium as champions. That isn’t the case for MSK, so here is Riddle to pop up on screen and ask for a six man. Walter is game and the match is set.

We look back at Harland wrecking Brian Kendrick.

Joe Gacy reminds Harland that it wasn’t his fault because Kendrick started it.

Edris Enofe is happy with his win over Von Wagner, who comes in to say Enofe got lucky. Malik Blade comes in to have Enofe’s back and a match seems to be set.

Hold on though as there is no Kendrick. Cue Andre Chase to say this is a teachable moment! Gacy likes education and mentions Harland being in a university….until he was expelled. As for Chase, thank you for being Kendrick’s replacement!

Chase gets shoved outside in a hurry and the beating continues on the floor. Back in and Chase is sent face first into the mat over and over, which is good for the stoppage at 1:00.

Post match, one of Chase’s students hits the ring to check on him but gets attacked as well. Harland then kidnaps him.

Legado del Fantasma asks Elektra Lopez where her loyalties lie. She doesn’t say but here is Solo Sikoa to accidentally run into them. They want an apology but we get a match instead.

Both are making their NXT debuts though they have been on 205 Live. Stratton takes her down with an armbar to start and then slams Henley to cut off a comeback attempt. An awkward looking handspring elbow sets up a Downward Spiral to finish Henley off at 2:35.

Tony D’Angelo warned Pete Dunne not to mess with him and then smashed Dunne’s hand. Maybe Dunne will listen to him next time.

It’s time for the contract signing between Roderick Strong and Carmelo Hayes, who hasn’t been seen so far. Malcolm Bivens thinks it might be due to the higher gas prices, but here are Hayes and Trick Williams anyway. Williams talks trash that Strong doesn’t understand, so Bivens translates. Strong threatens Hayes, with Bivens translating again, while also pointing out that Williams and Hayes are outnumbered. Williams goes on a rant, but Bivens doesn’t get paid enough to translate all night.

Wade Barrett, running this whole thing, has no idea what anyone has said so let’s just sit down. Hayes says Strong shouldn’t play with him or he’ll get put on a t-shirt. Next week, he’s unifying the titles and becoming the true A Champion. Strong promises to walk out as a two time North American Champion after he unifies the titles.

Hayes is going to be carried out though, which does not sit well with him. Both of them sign and the match is official. They throw the contract at each other and Barrett bails. Hayes leaves but Bivens yells at Williams to draw him back in. That means the Creed Brothers can put him through a table as the Diamond Mine stands tall.

Video on the tag team division with a lot of teams wanting the Tag Team Titles.

Escobar chops away to start and rolls him up for a fast two. Sikoa is getting a bit too frustrated early on and misses a stomp to make it worse. Escobar takes him back down into an armbar and then switches into an abdominal stretch. That’s reversed with a hiptoss and a running headbutt gives Sikoa two. Escobar is knocked outside, where the rest of Legado offers a distraction. That means Sikoa gets posted hard we take a break.

Back with Sikoa fighting up but getting taken right back down with a Russian legsweep. Escobar stands on his back to keep it in trouble, setting up a half crab with a knee in said back. A basement dropkick rocks Sikoa again but he’s fine enough to hit a toss gordbuster. There’s the Samoan drop but Sikoa has to deal with the rest of Legado. That means a chop block to Sikoa, setting up a super hurricanrana. Cue Xyon Quin, so Escobar takes him down with a dive and yells a lot. Escobar heads back in, where Sikoa superkicks his head off. The Superfly Splash gives Sikoa the upset pin at 13:32.

Harland and Joe Gacy take Andre Chase to the roof and leave him there.

Solo Sikoa wants to know who is left but gets jumped by Boa, who gives him a Tongan Death Grip. The cameraman gets taken out too.

We look at Tommaso Ciampa vs. Bron Breakker.

Wagner powers him into the corner to start but Blade hits a kick to the ribs. That earns Blade a big toss into the air for a bigger crash as the beating is on. A lariat blasts Blade but he comes back with some dropkicks. Blade’s springboard crossbody drops Wagner again but he grabs a high Angle Slam. The double underhook spinning slam finishes Blade at 4:02.

Post match Wagner goes after him again but Edris Enofe makes the save.

The winning team gets to challenge Mandy Rose for the Women’s Title next week. Shirai flapjacks Jade to start and tells her to bring it. Jade grabs a cradle for two of her own before snapping off a hurricanrana. The running knee smashes Shirai against the ropes and it’s off to Gonzalez for the power. Ray comes in to kick away at the ribs but Shirai has to come in and save her with a dropkick. Shirai’s Asai moonsault takes Gonzalez out again and we take a break.

Back with Ray stomping away on Jade but not being able to hit the KLR Bomb. The comeback bid doesn’t last long as Jade gets knocked down, but Gonzalez saves Jade from the Moon Over Moonsault. Instead Ray hits a big dive onto Gonzalez and Shirai 619s Jade. There’s a missile dropkick for two on Jade, who comes back with an enziguri to Ray.

The hot tag brings in Gonzalez to clean house, including the spinning Vader Bomb. There’s the Chingona Bomb but Jade tags herself in. The argument is on and Jade knocks Gonzalez outside, allowing Jade to roll her up. Gonzalez breaks that up…and knocks Jade onto Ray for the pin at 10:02.

Post match, Mandy Rose pops up to say her plan is working and she’ll see them at New Year’s Evil. 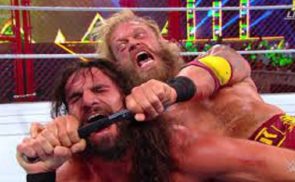 WWE Has A New Plan To Keep Fans Watching Their Shows