Just in case there are people watching the supplemental show for the minor league brand on Christmas Eve. Last week’s show was one of the rougher watches I’ve had around here and I can only hope that this one is a bit better. Having more people ready for a slightly bigger stage than the Performance Center would help. Let’s get to it.

Two weeks in a row for Henley and she gets a rather high energy entrance. Nile throws her down without much trouble to start but gets caught in an armbar. That’s broken up as well so some forearms annoy Nile a bit. A bulldog takes Nile down but she’s fine enough to power her way out of trouble.

There’s a belly to back suplex and a running kick in the corner rocks Henley again. We hit the bearhug on Henley before Nile throws her down. The freedom is enough for Henley to grab a rollup for two and some kicks are good for the same. Nile isn’t having that though and takes her down, setting up the dragon sleeper for the win at 3:14.

The good sized Kemp is making his debut. Chase gets sent into the corner to start before Kemp rides him to the mat without much trouble. Back up and Chase sends him throat first into the ropes to take over, followed by some right hands on the mat. The letter shouting stomps get two and a Russian legsweep is good for the same. We hit the armbar so Kemp can fight up to make the clothesline comeback. Rolling Chaos Theory gives Kemp two but Chase goes for the shoe, setting up the Downward Spiral to finish Kemp at 5:32.

They trade shoulders to start and neither can hit a strike to the face. Feng takes him down by the arm for a kick to the back but Sikoa blocks one to the chest. Back up and a running crossbody takes Feng down for two but he’s back up with some more kicks. We hit the chinlock for a bit before they strike it out, with Sikoa getting the better of things. Three straight backsplashes give Sikoa two and it’s a spinning backfist into the Superfly Splash to finish Feng at 4:50. 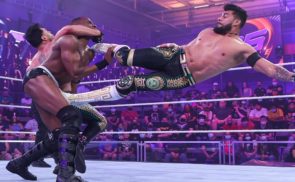