It’s a big night around here as we have a double main event. This time around it’s Chris Jericho vs. Jungle Boy in a non-title match with a ten minute time limit. On the other hand we have the Young Bucks getting a long awaited Tag Team Title shot against SCU. This is their last show of the year so hopefully they go out with a bang. Let’s get to it.

Omega and Fenix go to an early standoff so Omega hits a chop, only t have Fenix slip out of a One Winged Angel attempt. The running Fameasser connects but Fenix slips away again and makes the tag off to Pentagon. Page comes in as well and the fans like this staredown. They take their time before chopping it out, followed by a big boot to drop Pentagon.

Omega gets the tag, though Page doesn’t seem happy about it. With Pentagon down, Page and Omega celebrate a bit, allowing Pentagon to come back with a rake to Omega’s eyes. Omega is fine enough to hurricanrana Pentagon outside, meaning it’s the big flip dive to take out both Bros.

Fenix grabs Page’s feet though and Pentagon hits a Codebreaker, with Page staying on the knees so Fenix can add a top rope double stomp. Page is back up for the tag to Omega though and a high crossbody drops Fenix. You Can’t Escape hits knees and Fenix kicks Omega in the face.

A hurricanrana is countered into a powerbomb though and there’s the V Trigger to drop Fenix again. Omega rolls out of the corner for the tag off to Page so house can be cleaned. Back to back to back suicide dives put the Bros down on different sides of the ring and a dropsault gets two on Fenix.

The Bros are back with their wheelbarrow splash to Page, but a kick to the face lets Page hit a super fall away slam. It’s back to Omega, who buckle bombs Fenix into Pentagon in the corner. Everything breaks down and the Buckshot Lariat hits Omega by mistake. Page is sent outside and it’s the spike Fear Factor to finish Omega at 18:46.

Post match Omega and Page shove each other but we cut to Pac backstage. Pac goes into Michael Nakazawa’s locker room and closes the door so Omega bails through the back for the save.

Post break…and everything seems to be fine, though the Bros and Pac beat down Omega during the break.

Darby Allin/Cody vs. Butcher and Blade

The Bunny is at ringside too of course. Darby is willing to help Cody but if they win, he wants a rematch from a few months ago. Butcher shoves Darby down to start and it’s off to Blade, who gets armdragged outside so Darby can bring in Cody. Blade shoves Cody around as JR mocks himself for not remembering which is which. JR: “He’s the one with BUTCHER written on his a**. Sorry about that one TSN.”

A side slam plants Cody and he gets whipped into the corner as we take a break. Back with Cody and Blade hitting stereo crossbodies so Darby can come in. Butcher is right there to run Darby over though and we hit a Texas Cloverleaf. Cody makes the save and hits Cross Rhodes on Blade. Bunny’s distraction means there’s no cover so it’s Cody and Darby hitting stereo suicide dives. The Disaster Kick drops Butcher and Darby adds the Coffin Drop onto the apron. The Cody Cutter finishes Blade at 11:02.

Spinning backfist and the Implant Buster finish Alize at 57 seconds.

Kong cuts off some of Miranda’s hair post match.

Jungle Boy thinks his dad would be proud of him.

Non-title with a ten minute time limit. Boy starts fast with forearms and a rollup for two. The Walls are reversed into a hurricanrana for two and Boy hits some knees to the ribs. Back to back Codebreakers give Jericho two and he throws Boy outside. Jake Hager sends Boy into the barricade so it’s Luchasaurus brawling with Hager. Marko Stunt gets forearmed out of the air so Luchasaurus has to carry him to the back.

Jericho gets rolled up for two so it’s time to get serious. Boy knocks him outside and hits the big flip dive, followed by a diving DDT for two. A Backstabber puts Jericho down and Boy adds the Lionsault for another near fall. Jericho sends him throat first into the bottom rope and we have two minutes left. A powerbomb sets up the Walls with a minute and twenty seconds to go. Boy crawls to the rope but gets dragged in, only to survive anyway for the time limit draw at 10:00.

Hold on though as Jericho demands five more minutes so he throws Boy over the top, only to have Boy skin the cat. A hurricanrana and crucifix get two each on Jericho, who walks out as we take a break. Back and apparently the match is over at we’ll say 12:00, despite the lack of a bell.

Post match Jericho says he knew Boy couldn’t beat him but Tony points out that Jericho said Boy couldn’t last. They go back and forth until Jericho threatens to beat Tony up. Anyway he’ll deal with Boy later because this is all about whether or not Jon Moxley is joining the Inner Circle. The team has been in the Inner Sanctum all week and they have some big surprises planned for Moxley. Dynamite is back in two weeks and they’ll have something special planned for him on New Year’s Day.

The Lucha Bros interrupt an SCU promo and show Daniels a video of his botch last week, saying he doesn’t have it anymore. Daniels walks away hanging his head and SCU isn’t sure what to make of it.

#1 contenders match. Stadtlander cartwheels around a lot before bailing out of a Lockjaw attempt. Another Lockjaw attempt is countered into an Oklahoma roll for two on Baker and it’s a standoff. Baker avoids an ax kick and hits a neckbreaker to set up a chinlock. We take a break and come back with Stadtlander hitting a running knee on the apron. Baker hits a suplex into a Falcon Arrow and they’re both down. Lockjaw is loaded up again but Baker powers up and reverses into the Big Bang Theory for the pin at 9:26.

Post match Stadtlander does her finger point (as her species communicates) but here’s Brandi to ask if she’s in with the Nightmare Collective. That’s a no, so Brandi hits her in the eye with the high heeled shoe. Sadie Gibbs comes out for the save.

Shawn Spears and Tully Blanchard are glad tag team wrestling means something in AEW but they need to find Spears’ perfect partner.

Video on the Young Bucks trying to prove they’re the best tag team in the world.

The Bucks are challenging and they’re in the ring for the Big Match Intros. A very early SCULater attempt is broken up and it’s Kazarian being sent outside with Matt running Sky over. Sky’s TKO is blocked as well and everything breaks down with the Bucks getting the better of it. Nick’s rope walk hurricanrana is blocked so he pulls Sky to the middle rope with him and then hits the hurricanrana instead.

Matt adds a top rope elbow for two and Nick adds a big dive to the floor as we take a break. Back with Kazarian taking over on both Bucks, including a hiptoss into a neckbreaker on Matt. A double clothesline puts the Bucks down and the champs grab stereo dragon sleepers.

Nick flips Sky into Kazarian for the break and we’re told that the extra time in Jericho vs. Boy did not count, meaning it was a time limit draw. Matt and Kazarian come in to slug it out with Matt pulling him up into the Tombstone. Kazarian manages to tag Sky and escape, setting up a German suplex to Matt. Nick gets DDTed onto the apron and the SCULater retains the titles at 10:43.

Post match the Creepers come out and here’s the Dark Order on the stage to say that was a hard loss for the Bucks. On any other night they would recruit the Bucks to the team, but this isn’t a recruitment. Tonight is an initiation so the Creepers come after the Bucks and SCU. Alex Reynolds and Jon Silver lead the charge but the beatdown is on. Christopher Daniels, Cody, Kenny Omega and Dustin try for the save but get beaten down as well. Grayson gives Reynolds and Silver their masks. Evil Uno says no one will ever doubt them to end the show. 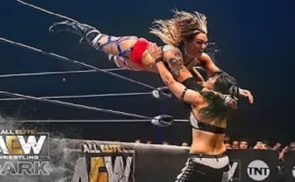 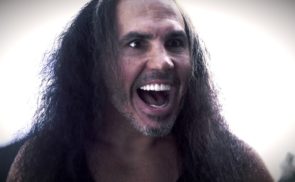