It’s the one night of the year where every championship is defended, but not everyone can be a winner. Tonight at Clash of Champions 2020, not every champion who competed left with the title that they came in with.

In the opening contest, Sami Zayn defeated AJ Styles and Jeff Hardy in a Triple Threat Ladder Match to become the new Intercontinental Champion. You can see a clip of the action below:

With everything else not working, Sami whips out some handcuffs…and attaches Jeff’s EAR to the ladder. Sami isn’t done though and tries to handcuff AJ to the ropes but AJ fights up in time.

Somewhere in there, Sami handcuffed himself to AJ though, leaving AJ to hammer away as he realizes what just happened. AJ loads Sami up in a fireman’s carry and climbs the ladder as Jeff, still earcuffed to the other ladder, is back in. Sami has a key and unhooks himself as Jeff rams a ladder into AJ. That means AJ can be cuffed to the ladder hinges, leaving Sami to climb up and win the titles at 26:42.

This was the match of the night in my opinion, and all three competitors brought it. It was an outstanding way to open the show and I can’t wait to see where they go from here. Obviously Zayn and Hardy will have another match, but I have a feeling that Styles will no longer be on the blue brand in a couple of weeks. Just a hunch!

What did you think of the Triple Threat Ladder Match between Sami Zayn, AJ Styles and Jeff Hardy at Clash of Champions 2020? Leave us a comment below, or post a comment on our Facebook page! Also, be sure to sign up for our newsletter!

Full Details On The Return Of The WWE Draft 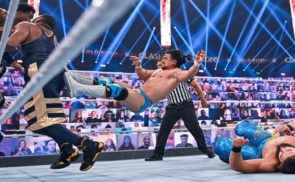