So Long, Farewell. Impact Tag Team Wrestles Its Final Match With The Company

Sometimes, it’s time to move on. Professional wrestling stars come and go, and leaving a company is nothing new. Such is the case for one tag team, who are now former members of the Impact Roster.

Santana and Ortiz, better known as LAX, have wrestled their final match with the promotion, which was announced via a tweet earlier today. They had the following to say regarding the news:

“Last night we wrestled our final match with Impact Wrestling. Our appreciation and gratitude for every single person there who had a hand in helping us get to this point, is absolutely endless. Thank you for the opportunity to show the world our passion and commitment for this business. And most of all, for the opportunity to represent our people and culture on a big stage. We are forever grateful.” 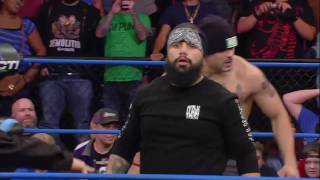 It had been previously rumored that both WWE and AEW were interested in the duo.

According to a report from Wrestling Inc., their final match was against Rich Swann and Willie Mack during a TV taping in Mexico. After the match, members of the Impact locker room came out to the ring to say goodbye to them.

I hope that they end up in NXT. LAX has always been one of my favorite teams in Impact, as I think that they have a unique perspective and ring style. Either way, their futures are very bright, and it will be exciting to see where they end up down the road!

It’s A Unique Privilege. Which Other WWE Superstar Has Creative Freedom On Promos?