Konnor’s 60 Day Suspension Has Ended, What Does That Mean For The Ascension?

What’s funny is when compared to Adam Rose’s suspension, and eventual release from the company, Konnor of The Ascension had a fairly easy suspension.

Regardless, there is good news for Konnor because as of yesterday, his sixty-day suspension is officially over and he can return to work, but the question is what will he be doing.

The Ascension was a hugely dominate tag team, but that doesn’t automatically guarantee success on the main roster, so Konnor and Viktor have been stagnant for most of their run on Raw and SmackDown.

That could change with the upcoming brand split since Raw and SmackDown are going to need to focus their tag team divisions if there are to be two separate tag team titles.

However, there was a recent report that Viktor was being repackaged into “The Demonic” Viktor, and he could be launched into a solo run. That creates an interesting question of what comes next?

Konnor is a strong and intimidating guy, and he could be repackaged as well. It’s tough to see what he’d be capable of, but the potential for two new singles stars is just as interesting a concept as The Ascension getting a more serious role on WWE television.

Do you think The Ascension deserve a bigger role in WWE ‘s tag team division? 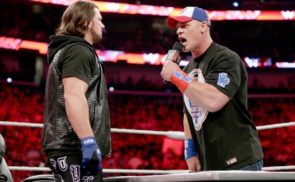 Rumor: Winner of John Cena vs. AJ Styles at “Money in the Bank” Possibly Revealed