That’s not so good. Injuries are one of the worst things that can happen to a wrestler as you never know how long they might be out of action. It instantly brings up the questions of just how bad things are and when you might be seeing them return to the ring. That was the case with a top WWE name earlier this year and now we have some bad news about her recovery time.

Becky Lynch suffered a separated shoulder during her match against Bianca Belair at Summerslam in July, putting her on the shelf since. According to Fightful Select, it will be a few more months before Lynch is able to return to the ring. While WWE is hopeful that she will be able to wrestle again by the end of the year, it is far from a guarantee. Lynch will not require surgery to repair the damage.

Opinion: There is some good with the bad here, as the lack of surgery is always a positive. At the same time though, not knowing how long Lynch is going to be out does not bode well as it is still open ended. It will be great to have Lynch back as she was injured just as a bunch of fresh names joined the roster. Hopefully she is back sooner than later, as she has spent way too much time away from the ring in the last year or two.

What do you think of Lynch? Who should she face when she gets back? Let us know in the comments below.

AEW Releases Name Involved In All Out Backstage Brawl 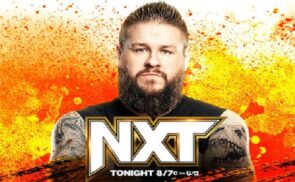