It’s a possibility. The entire world is dealing with the Coronavirus at the moment and there are very few indications that the situation is slowing down. There are places where things are getting better, but at the moment, the United States is starting to get hit fairly hard. That is creating quite the problem, and it might have quite the major impact on the professional wrestling world.

One of the biggest ways that governments are dealing with the Coronavirus is banning large gatherings of people. The idea is that without so many people coming together, it can be harder for the virus to spread. However, there are certain places and events that are built around large gatherings of people, and one of them just happens to be the biggest night of the wrestling year.

According to Ryan Bass of CBS Tampa, Tampa, Florida Mayor Jane Castor will meet with city officials on Thursday to make a decision about the future of large events in the city in the coming weeks, including WrestleMania 36 on April 5. WWE has announced that they will be running the show as long as it is up to them, but this could prevent the show from taking place. There is no word on what would happen should Tampa change the show.

.@CityofTampa and @JaneCastor will meet on Thursday to discuss canceling or postponing "major" events due to #Coronavirus. This weekend's River O'Green fest isn't likely to be canceled.

It would be a huge change. Check out some classic WrestleMania moments which we might not be seeing:

Opinion: Maybe it is the fact that I plan on going to the show and have had tickets for several events for over four months, but this would be devastating. What in the world would WWE do if they can’t run WrestleMania as planned? We would be in completely uncharged territory and that could mean so many things for WWE in the far and near future. Either way, it would be bad for the wrestling industry, but there are things more important than wrestling, as annoying as it might be.

Do you think WrestleMania will take place as scheduled? What happens if it doesn’t? Let us know in the comments below. 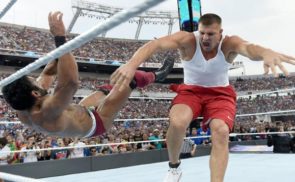