We are eight days away from Extreme Rules and the card is mostly set. There are enough matches ready to go for the show but it wouldn’t surprise me to see a little more added this week. That isn’t a bad thing as there is no major match just yet, but that leaves some ground to be covered. Let’s get to it.

Ricochet headscissors Sami down to start and snaps off a dropkick as Graves compares the Bloodline to the family on House of the Dragons. Moss and Sikoa come in with the former getting taken down into the corner for a stomping. It’s back to Zayn and everything breaks down, with the villains being sent outside. Moss LAUNCHES Ricochet over the top and onto the both of them as we take a break.

Back with Ricochet fighting out of a nerve hold but getting Samoan dropped for two. Another Samoan drop is countered with some elbows to the head and the hot tag is enough for the tag to Moss. House is cleaned so Sikoa grabs a chair for a distraction, allowing Zayn to Blue Thunder Bomb Moss for two more. Everything breaks down and Zayn breaks up Ricochet’s dive. Ricochet gets away and tries the dive but gets a chair pelted at his head by Sikoa to knock him silly. Sikoa tags himself in and spinwheel kicks Moss, setting up the Swinging Solo (swinging Rock Bottom) for the pin at 12:36.

Post match Sikoa beats on Moss some more, despite Zayn telling him to cool it.

Post break Zayn and Sikoa head back to the locker room, where Jey Uso (not supposed to be here tonight) opens the locked door. Uso is proud of Sikoa and….that’s about it. Sikoa heads into the locker room, leaving Jey to say he sees right through Zayn. This is Zayn’s one shot, so Jey tells him not to dare think about putting the family in jeopardy. Zayn says take it up with Roman (that draws an OOOO from the crowd) and heads into THEIR locker room. Jey is seething.

Karrion Kross is ready to take out Drew McIntyre and move on to take the titles from Roman Reigns.

Austin Theory is happy to have seen Drew McIntyre humiliated at Clash At The Castle. McIntyre is missing the mental abilities. How did he not see Solo Sikoa coming at him? McIntyre grabs Theory by the shoulder and tells him to get in the ring now.

Hold on though as the Alpha Academy is here with Theory. McIntyre actually gets taken down to start and Theory hammers away, only to get caught with the Futureshock. The Claymore is loaded up but McIntyre has to deal with the Academy for the DQ at 1:52.

Result: Drew McIntyre b. Austin Theory via DQ when the Alpha Academy interfered (1:52)

Post match the beatdown is still on but Johnny Gargano and Kevin Owens (with separate entrances and separate music) come in for the save.

The Maximum Male Models are ready to bring home a title to make things better for Max Dupri. He’s thrilled at the idea of the two of them facing the Usos….but they mean the title for longest time holding a pose. Max storms off as they strike a pose, with Hit Row coming in to glare at them.

Shotzi is ready for Bayley tonight.

B Fab is here with Hit Row. Adonis gets taken down by Angel to start, allowing Angel to TAKE OFF HIS PANTS and throw them at Dolla. Adonis neckbreakers his way out of trouble and hands it off to Dolla for the running knee (Tennessee Whiskey), setting up El Rey (a jumping elbow). The Wasteland/fall away slam combination sets up the Heavy Hitter to finish Humberto at 2:24.

Commentary talks, with a really big sign behind them saying “REVEL IN WHAT YOU ARE”.

Ronda Rousey isn’t worried about Liv Morgan but is considering a baseball bat.

Rousey takes her to the mat without much effort but Natalya reverses into almost a cover. Back up and Rousey knees her in the ribs but the running knee in the corner is countered with a powerbomb. The Sharpshooter attempt is countered into the ankle lock, which is broken up as well. Natalya is back up with a discus lariat for two but Rousey ankle locks her for the win at 3:45.

Post match Liv Morgan comes out with a baseball bat but Rousey throws her into the timekeeper’s area anyway. As security gets Rousey to leave, Liv charges at Rousey again and they’re both held back.

Drew McIntyre, Kevin Owens and Johnny Gargano are in the back and run into the Models still holding the pose. Owens keeps going and bumps into Sami Zayn, who he says needs a new shirt.

Shinsuke Nakamura and Sonya Deville aren’t sure what to think of the Models posing.

Here is Imperium for a chat. Gunther is ready to beat Sheamus again next week and then to beat all of the Brawling Brutes at Extreme Rules. Cue Sheamus to interrupt (and call Gunther Betsy) but he’s on his own this week because the rest of the Brutes are stuck in Florida. Sheamus is ready to fight and uses a shillelagh to take out Kaiser and Vinci.

That leaves Gunther, who wants the club dropped. That’s fine with Sheamus but Kaiser and Vinci get back up to hold Sheamus down. The beating is on, but Sheamus asks if that’s all they have. Gunther lays him out with a shillelagh shot to the face.

Bayley is ready to take out Shotzi, even if Iyo Sky and Dakota Kai are stuck in Florida. Then she’s winning the title at Extreme Rules.

Commentary announces that Antonio Inoki has passed away.

Shotzi has her tank back for a big reaction. Bayley takes her down to start but gets sent throat first into the bottom rope. Shotzi goes up but gets caught, only to send Bayley outside as we take a break. Back with Shotzi jumping over Bayley in the corner but missing a charge, setting up the Rose Plant to give Bayley the pin at 6:33.

Post match Bayley gives her another Rose Plant and pulls out a ladder. Bianca Belair runs in for the save and Bayley bails.

The Models are close to breaking the record but Max Dupri breaks it up. He takes off the M belt and says this was never for him. “Yeah.” Graves: “I haven’t been this sad since Shawn kicked Marty through the Barbershop window.”

We hear about McIntyre and Gargano as Evolve Tag Team Champions for your mind blowing line of the week. Gargano takes Theory down to start and Owens hits the flip dive off the apron to take out Theory and Gable as we take a break. Back with Gable getting two off a northern lights suplex and grabbing an armbar. That’s broken up and the hot tag brings in Owens to start the house cleaning.

A DDT plants Theory and a fisherman’s buster onto the knee does the same to Gable. The Cannonball sets up the Swanton for two on Gable but a kick to the face drops Owens. Everything breaks down and Otis runs McIntyre over on the floor. A bunch of superkicks rock Otis (with Gargano looking to be favoring his ankle) and it’s a Stunner to Gable on the announcers’ table. The Claymore hits Theory for the pin at 9:41.

Post match McIntyre gets the strap out to beat on Theory to end the show. 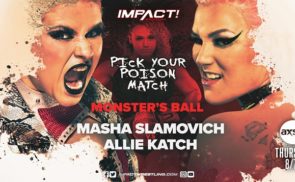 What Made Vince McMahon Reportedly Say “I’m Sorry I Brought That A****** back.”