We are done with Victory Road and that means we are only a little over a week away from Bound For Glory. I’m still not sure why Victory Road was such a necessary show before the biggest night of the year but at least it wasn’t an eventful night, meaning Bound For Glory got even more build. Hopefully that can continue tonight so let’s get to it.

It’s Ace Austin/Chris Bey for the Club, with Juice Robinson in their corner. Austin and Kid start things off with an exchange of wristlocks but hold on as Austin needs to hold up Too Sweet. A quick high crossbody gives Kid an early two so it’s Bey offering a distraction so Austin can take over on the arm. Bey comes in with a backbreaker as we hear about his album coming out around Halloween.

Kid slips away and hands it off to Miguel to fire off kicks at Bey. A northern lights suplex gives Miguel two but Bey is back with a reverse DDT/Downward Spiral combination to drop both of them at once. Austin comes back in and catches Kid with a springboard spinning kick to the face. Miguel pops up for a springboard sunset bomb for two on Austin. Back up and Austin shoves Bey at Miguel for the Art of Finesse, setting up the Fold for the pin at 8:19.

We look back at Bhupinder Gujjar losing the ladder match to Brian Myers last week.

Gujjar says he can’t wrestle this week due to a broken nose, but he’ll be ready for the Call Your Shot gauntlet match at Bound For Glory.

Frankie Kazarian is ready to win the X-Division Title at Bound For Glory. He wants to prove that he still has it.

Someone in a yellow hoodie tries to jump the barricade behind commentary but isn’t named.

Steve, with Black Taurus, is challenging. They fight over wrist control to start until Steve goes after Myers’ face. A bite to the face is blocked with a throat snap across the top though and we take a break. Back with Steve hitting a Cannonball in the corner for two but getting caught with the implant DDT for two. Steve comes back with the Upside Down in the corner, which lasts about as long as it can. Myers distracts the referee though, allowing him to poke Steve in the eye. The Roster Cut retains the title at 3:54.

Post match Myers says he has turned the title into the most prestigious title around here. Now he wants better competition so it’s open challenge time at Bound For Glory.

Johnny Swinger’s ex-fiance shows up and yells at him, despite now being married to John E. Bravo (from Wrestle House 2). Arguing ensues, with Taya Valkyrie wandering in to wonder what is going on here.

The family from the recent Joe Hendry videos are at the reading of their father’s will and want a name said. Cue Joe Hendry, who everyone still believes in.

Rosemary begrudgingly asks James Mitchell for help with the Jessicka issue because she wants the Tag Team Titles back. Taya Valkyrie and Jessicka come in to say they can do it, so Rosemary eventually gives in.

Delirious’ dropkicks have no effect so he rams Taurus mark first into the buckles. That doesn’t work either as Taurus steps on Delirious’ bare feet but Delirious starts running the ropes in an odd pattern. Delirious manages to take the leg out and hit a slam, setting up a series of ten legdrops to send Taurus outside. Back up and Taurus hits a pop up Samoan drop and a headbutt. The spinning piledriver gives Taurus the pin at 5:04.

Bobby Fish is here and wants Josh Alexander so he’ll win the Call Your Shot gauntlet in his hometown of Albany.

Mia Yim is ready for Mickie James at Bound For Glory. They fought in one of Yim’s first matches and yes, we have a clip of Mickie beating her probably fifteen or so years ago. Gisele Shaw comes up to mock the idea of Mia beating Mickie so a match is made for next week.

Here is Honor No More for a chat, with the fans being way behind PCO. Eddie Edwards is happy with Victory Road because he showed he can beat Josh Alexander. There were some setbacks on the night though and yes, he is looking at PCO again. PCO lost to the Motor City Machine Guns and he likes to step up too much, so who does he think he is? Vincent puts a bag over PCO’s head to calm him down as Matt Taven takes the mic.

Taven rants about how Impact has tried to hold the team down but now the are Tag Team Champions. At Bound For Glory, Honor No More will leave with the World and Tag Team Titles, with everyone talking about how great Eddie is for pinning Alexander at Victory Road. Maria gives us a video looking at Eddie pinning Alexander over and over, leaving Eddie to rant about how everyone turned on him.

Cue Alexander to say he sees this as any fight he has ever had. He views the title as something that proves he’s the best while Eddie sees it as job security. At Bound For Glory, the only one outnumbered is Edwards. Alexander comes to the ring for the fight, with Heath, Rich Swann and the Motor City Machine Guns coming in to help clear out Honor No More.

Joined in progress with PCO coming in to make Swann roll around a bit. PCO powers him down though and drops a leg to the back of the head, allowing the tag to Vincent. A basement Downward Spiral gets two but Swann is back up with an enziguri. The tag brings in Heath to clean house with a powerslam getting two on Vincent. Heath sends Vincent into PCO and Swann gets in a cheap shot from the apron so an implant DDT gets two on Vincent. With PCO knocked outside, Swann hits a 450 to finish Vincent at 4:34.

Moose isn’t happy with Steve Maclin, who comes in for the brawl.

Scott D’Amore tells Sami Callihan that he can’t get in the ring because of a broken orbital bone, so D’Amore lets Sami referee Moose vs. Maclin next week.

Monster’s Ball, meaning anything goes.  They slug it out to start and an early double clothesline takes both of them down. A duel of the trashcan lids goes to Katch as she cracks Slamovich over the head. Slamovich is right back with a German suplex and it’s time to whip Katch with a chain.

We mix things up a bit with Slamovich putting the side of a street sign in Katch’s mouth before going with the more classic double arm crank. A cowbell is pulled out of the trashcan but since that takes some time, Katch cracks her with a trashcan lid to take over. Slamovich shrugs it off and hits an Air Raid Crash into the corner as we take a break. Back with Slamovich driving a chain into Katt’s (very busted open) mouth in the corner before grabbing a chair.

They fight to the apron and Slamovich Russian legsweeps her through a table to leave them both down. With Slamovich up first, it’s time for the thumbtacks but Katch piledrives her onto them for two more. A trashcan full of broken cans is poured out and it’s a Snowplow to drive Katch into the junk on the mat for the pin at 18:44. 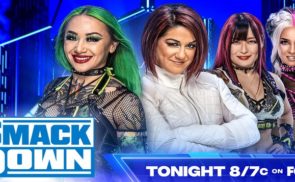