We have just over two weeks to go before Survivor Series and that card has started to come together. We have most of the participants set for the women’s WarGames match so maybe this week we can get someone set up for the men’s. Other than that, New Day is challenging the Usos in the hopes of saving their Tag Team Title record. Let’s get to it.

We open with a recap of Roman Reigns retaining the World Title over Logan Paul at Crown Jewel.

The Usos are defending.  Jey, with his hand taped, starts with Woods and they stare each other down a bit. Woods grabs a headlock as we hear about the histories between the teams. Kofi springboards in with a crossbody for two on Jey but it’s off to Jimmy with a right hand to the face. Everything breaks down and Kofi hits a Trust Fall onto both Usos as we take a break.

We come back with Jey hitting a suicide dive to send Kofi into the barricade and then whipping him into it again for a bonus. The fans want Sami, who is apparently missing due to a personal issue. We slow down a bit to Kofi being sent into the corner, setting up a wishbone leg split. A middle rope dropkick gets Kofi out of trouble though and Jey gets kicked away, only to have Jimmy pull Woods off the apron. The pop up neckbreaker gives Jey two and we take a break.

Back again with Kofi fighting out of a chinlock and making the hot tag to Woods so house can be cleaned. Kofi hits a splash to set up a Woods top rope legdrop for two. The Boom Drop connects on Jimmy but Jey makes a blind tag. That’s fine with Kofi who hits the SOS for two. Frustration is setting in as it’s off to Woods, who gets superkicked down to set up the double Superfly Splash. The 1D is broken up though and the Midnight Hour hits Jey on the floor.

Back in and a tornado DDT to Jimmy sets up the Midnight Hour for two as Jey makes a VERY last second save for two. The four of them stand up and slug it out with Woods being sent outside and superkicked over the barricade. That leaves Kofi to be sat up top where he goes old school with a double noggin knocker. Kofi tries a diving something, only to land in the 1D to retain the titles at 23:47.

Roman Reigns and company are pleased in the back as the Usos show some respect after the match.

Post break the Usos go in to see Reigns, who says it feels good. Now though, Reigns is going to handle something, but he wants the Usos by his side. It is time to handle some business in the ring live tonight. The Usos are with him.

The rest of Legado del Fantasma is here with Escobar. They run the ropes to start until Nakamura knocks him outside as we take an early break. Back with Escobar working on the knee until Nakamura manages a kick to the head. The sliding German suplex drops Escobar again but Escobar is back with la majistral for two. That’s fine with Nakamura, who is back up with a middle rope knee for two of his own. The reverse German suplex drops Escobar again but Nakamura has to deal with Legado. Escobar catches him on top back inside though and it’s a super Phantom Driver for the pin at 8:19.

LA Knight is mad about not being in the World Cup but the video monitor behind him keeps glitching in a Bray Wyatt style. Then he turns back around and Wyatt himself is waiting on him. Wyatt says now that they have been introduced, they can be friends. For his entire life, Bray has been told that his rage will make a monster out of him, but for the longest time, he has pretended to not be proud of the things that he does. Knight doesn’t care, so Bray drops him with a single shot and leaves. Knight isn’t sure where Wyatt went.

Liv Morgan vs. Lacey Evans vs. Raquel Rodriguez vs. Shotzi vs. Sonya Deville vs. Xia Li

For a shot at Ronda Rousey at Survivor Series and one fall to a finish. It’s a brawl to start and Evans blasts Li with a Woman’s Right for two, with Deville making the save with a running knee. Liv makes a save of her own and sends Deville outside, where Liv can start messing with the steps. Deville is back up to send Liv face first into the steps, leaving the other four to fight inside. Rodriguez hits a delayed superplex to Li, with Deville running back in to steal a near fall.

We take a break and come back with Liv hitting a middle rope dropkick on Li and firing off some running backsplashes in the corner. Deville comes back in to send Liv outside but it’s not enough to steal a pin on Rodriguez. Li kicks Evans down but Rodriguez hits Li with the Tejana Bomb.

Deville and Rodriguez take turns trying to get the pin….and let’s have a table, just because. Liv dives off the barricade to hit Rodriguez, who slams into the side of the table. The camera stays on Morgan, Deville and Rodriguez down on the floor for a good bit as the fans chant for the table. Back in and Shotzi hits Never Wake Up for the pin on Evans at 11:30.

Post break Emma comes up to Shotzi in the back and offers congratulations. Emma asks if Shotzi has seen Madcap Moss, with Shotzi thinking Emma has a thing for him. With Emma gone, Shayna Baszler comes up to say Ronda Rousey will wreck her at Survivor Series. Shotzi isn’t worried, but Ronda Rousey pops up for a distraction so Shayna can choke Shotzi out.

Ricochet has Mustafa Ali in the first round of the World Cup and knows what it takes. Imperium comes in to mock Ricochet for thinking he can win. Gunther hopes Ricochet can win so Gunther can beat him again.

Mahal promises to win, jumps him before the bell and even manages to kick out the knee. Strowman is back up with a shoulder t othe floor, followed by the running shoulder on the floor. Back in and a powerbomb finishes for Strowman at 1:48.

B Fab vs. Zelina Vega

The rest of Hit Row and Legado del Fantasma are here…..and we’re cut off by the Viking Raiders, complete with the still unidentified woman on the stage. The Raiders clean house and the woman is identified as Sarah Logan as she beats up B Fab. No match.

Here is the Bloodline for whatever Roman Reigns needs to say. Paul Heyman talks about being on the private jet with Reigns on the way to this h*** hole….and we now pause for booing. Paul: “Indianapolis, that’s not very Ucey of you.” Heyman talks about all of the great sports rivalries that play out on Fox, such as the United States vs. the UK in soccer and the Cowboys vs. the Packers coming up this weekend. You have the Usos vs. New Day and Heyman can’t keep a straight face as he says that isn’t a rivalry at all.

Reigns talks about how difficult it is to be his cousin and he thought this moment would ever come. He addresses the Usos….and here are the Brawling Brutes to interrupt. Ridge Holland talks about the Bloodline using their numbers advantage very week. Well tonight it’s fight night, and they have backup. Cue the returning Sheamus…and his mic keeps cutting in and out.

Sheamus seems to say this is the start of the end of the Bloodline. Reigns mocks the mic screwing up so Sheamus says he’ll say it to Reigns’ face. The Bloodline beats Reigns down but Drew McIntyre comes in for the save. McIntyre fights off most of them but Reigns kicks him in the face. Sheamus is back up for the slugout with Reigns and the big brawl ends the show. 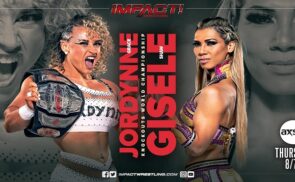