We have two shows left before Overdrive and the card is mostly already set. This week is likely going to be a lot more firming up of the card, plus some extra X-Division Title tournament matches. The tournament still needs a final and we are probably getting closer to one this week. Let’s get to it.

Myers, with Matt Cardona, is defending. Before the match, Hendry promises to be a Digital Media Champion that will inspire the comments section. The fans make it clear that THEY BELIEVE as Hendry works on the arm to start. A delayed suplex gives Hendry two but Myers is right back with a kick to the face. The chinlock goes on for a bit before Myers switches to a guillotine choke.

That’s broken up with straight power into a suplex but the Standing Ovation is blocked. Myers hits a lifting Downward Spiral for two but Hendry gets the same off a pop up powerbomb. They head outside where Cardona offers a distraction but here are Heath and Rhino to take care of him. Myers hits the inverted DDT for two, only to have the Roster Cut countered into the Standing Ovation to give Hendry the pin and the title at 5:59.

Jai Vidal has a tribute video ready for Gisele Shaw but it needs her holding the Knockouts Title. She’s working on that. We get the video, which has some odd audio issues where the wrestlers’ mouths and voices don’t quite line up when they say “Gisele Shaw”.

Violent By Design is back with a new era.

Bailey starts fast with his bouncing kicks before being sent to the apron for a standoff. Miguel snaps the arm over the rope, kicks it out, and takes Bailey down with an armbar. Back up and Bailey fires off some kicks but here is Kenny King to watch. We take a break and come back with Bailey hitting a standing shooting star press for two as King is at ringside with a bucket of popcorn.

They trade spinning shots to the face and it’s a double knockdown. Miguel misses the Meteora but avoids the Ultimate Weapon and poisonranas Bailey out to the floor. Back up and Bailey kicks him off the apron, setting up the middle rope moonsault. The moonsault knees from the apron crushes Miguel again….and then King sends Miguel into the steps for the DQ at 10:33.

Flashback Moment of the Week: Jordynne Grace b. Taya Valkyrie to win the Knockouts Title on February 11, 2020.

Jessicka is upset by her loss so Taya Valkyrie and Rosemary tell her to get mad and crush Tasha Steelz next week. Rosemary: “EAT HER FACE!” Jessicka: “Ok.”

Kenny King saw something in Mike Bailey last week and now he has seen it again. He’ll be seeing Bailey again soon.

Heath and Rhino are ready for the Major Players. They walk over to Josh Alexander to warn him that Bully Ray is horrible.

Jessicka has found a self help book that tells her to drink a lot.

Alisha Edwards comes up to Eddie Edwards, who says he left Honor No More and now they can be ok. She doesn’t buy that everything is over though.

Deonna Purrazzo is here with Green, who takes over on the arm to start. Mickie switches into a hammerlock and kicks her in the head for two. A Purrazzo distraction lets Green grab a Backstabber but more cheating gets caught, meaning Purrazzo is gone. Green is back up with a lifting Downward Spiral for two and we hit the quickly broken chinlock. Back up and Mickie snapmares her down, only to get pulled into the half crab.

That’s broken up with a kick out to the floor, meaning it’s time for a slugout on the apron. Green knocks her to the floor but falls down as well, leaving them both to dive back in. They slug it out from their knees with Mickie getting the better of things and grabbing a neckbreaker for two. Green is sent into the referee though, only to walk into a flapjack. Cue Purrazzo to interfere but Taylor Wilde comes out to brawl her to the back. I’m Prettier gives Green two so she goes up to miss a missile dropkick, allowing James to grab a rollup pin at 10:35.

Steve Maclin goes looking for Scott D’Amore but finds Tommy Dreamer instead. Dreamer tells him to chill and be a locker room leader but Maclin accuses Dreamer of only caring about himself and Bully Ray.  A match seems to be made.

Johnny Swinger is here with Zicky Dice and they say GET THE TABLES. That takes too long though and it’s a Bully Bomb to finish Dice at 1:10.

Post match Moose comes in with a low blow to Ray and the spear sends him through a table.

Sami Callihan has kidnapped a Violent By Design goon and isn’t happy with having interference last week against Eric Young. So let’s do it one more time, but in a Death Machine Double Jeopardy match, where you have to make your opponent bleed before you can pin them.

During the break, Bully Ray said he wanted to make his Overdrive match with Moose a tables match.

Video on Frankie Kazarian’s time in Impact Wrestling, which doesn’t include a World Champion. Kazarian says he has to win at Overdrive.

Shaw, with Jai Vidal, is challenging. Grace grabs an early spinebuster for two but has to kick Vidal in the face for offering a distraction. That’s enough for Shaw to hammer away and take over, including some running elbows in the corner. Grace easily muscles her over with a suplex but gets driven straight into the corner. Back up and a hard shot drops Shaw and we take a break.

We come back with Grace winning a slugout and firing off some slams. Shaw catches her with a kick in the corner though and a hanging DDT gets two. Grace cuts her off on top though and hits a superplex into a Jackhammer for two of her own. A Vertebreaker of all things gives Grace two more and Shaw’s neckbreaker gets the same. The running knee misses though and Grace hits a heck of a powerbomb. The Grace Driver retains the title at 14:31.

Post match Masha Slamovich comes out and decks Grace with a chair. A Snow Plow onto some chairs leaves Graces laying with Slamovich holding up the title.

We go to the desert, where a bolt of lightning hits a grave. PCO’s hand pops out to end the show. 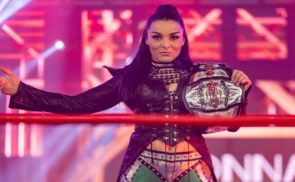