We’re coming up on the end of the year and that means the Royal Rumble is still pretty far away. This time around we have a Tag Team Title match as the Brawling Brutes challenge the Usos, which should be a good fight. Other than that, it’s time to get ready for next week’s Intercontinental Title match so let’s get to it.

The Brutes (Sheamus/Butch with Ridge Holland) are challenging while Sami Zayn and Solo Sikoa are here with the champs. Sheamus headlock takeovers Jimmy down to start and then blasts him with a clothesline. Butch comes in and gets taken into the corner for a throat first drop across the top as we take a break.

Back with Butch still in trouble but managing a German suplex off the ropes. That’s enough for the tag off to Sheamus for the house cleaning. We get the stereo multiple forearms to the chest, with Butch even outlasting Sheamus to make it worse. Super White Noise drops Jey for two and we take another break.

Back again with Butch knocking Jey off the top as Jimmy kicks Sheamus on the apron. That earns Jimmy White Noise on the apron but Jey dives onto Sheamus. Butch moonsaults onto the champs, setting up a powerbomb out of the corner for two on Jimmy back inside. Sheamus Razor’s Edges Jimmy into a neckbreaker for two more with Jey making the save. Holland cuts off an interfering Sheamus but Sikoa sends Holland into the timekeeper’s area. Butch comes back in and forearms Jey but Jimmy makes the blind tag, setting up the 1D to retain at 19:38.

Braun Strowman runs into Kurt Angle (the birthday boy) in the back and Gable Steveson. Strowman wants Steveson on Smackdown and offers him these hands. Steveson says Strowman will be the first person he comes to see, though everyone is perfectly cool.

Here is LA Knight for a chat. He knows that he has struck a nerve in Bray Wyatt (with an insult to the crowd for popping for Wyatt’s name) and doesn’t buy Wyatt denying that he attacked Knight. We see some clips of Knight being attacked in recent weeks, with small images of Bray’s mask visible. The video is hacked, with Bray’s voice saying do it, because “he deserves to be punished”. We see some clips of Knight in pain, Uncle Howdy, and the old rocking chair. With Howdy’s face on screen, someone says the door is closed to wrap it up. Knight says that is all the evidence you need so he’ll go do something about it right now.

Legado del Fantasma were being interfered in the parking lot when Shayna Baszler and Ronda Rousey showed up to slam Shotzi’s hand in a car door.

The rest of Legado and Valhalla are here with Zelina Vega joining commentary. Erik runs Wilde over to start and it’s off to Ivar for a shoulder in the corner. Cue Hit Row’s music, with B Fab showing up on the stage. Hit Row comes in through the crowd and jumps Legado for the DQ at 1:47.

LA Knight goes looking for Bray Wyatt and finds his shirt. Then the lights go out and we see the mask.

Kurt Angle is having his birthday party in the back….and gets a birthday card from Jason Jordan for a reunion.

It’s time for the contract signing between Gunther and Ricochet. Cue the New Day (in Tommy from Power Rangers tribute gear) to say we know how this is going. Adam Pearce: “You don’t think that’s how this is going to go do you?” Woods: “Have you ever watched wrestling?” Pearce: “Good point.” Gunther is sick of these jokes and says he’s a wrestler rather than a performer. Ricochet: “Did you just say you have a problem performing?” The fight is teased so Pearce makes a six man.

Imperium is sent outside to start and the triple dives take them down again before the bell. We settle down (and start) with Kaiser being taken down and splashed by Woods but Vinci sends him outside. Back from a break with Vinci catching Woods in a tilt-a-whirl backbreaker and handing it off to Gunther.

That means a big boot to knock Ricochet off the apron and a seated senton for two on Woods. Kaiser gets in a few more shots, only to have Woods slip away to make the hot tag off to Kofi. A high crossbody gives Kofi two but Kaiser trips him from the floor. Kofi gets sent over the announcers’ table and we take another break.

Back again with Gunther and Ricochet coming in, with the former blasting him with a chop. Ricochet is back up with a kick to the head, earning himself another hard kick. A Code Red gives Ricochet two and it’s back to Kofi. Vinci’s powerbomb is countered into a hurricanrana and Ricochet gets to clean house again. Woods dives onto Vinci and Gunther on the floor, leaving Kofi to Trouble in Paradise Kaiser. Ricochet’s shooting star press finishes Kaiser at 18:45.

The Alpha Academy can’t get into Kurt Angle’s party but the Street Profits can.

The Bloodline celebrates their win, with Solo Sikoa not looking thrilled. They’re off to get some food but Jey Uso holds Sami Zayn back. Jey suggests that Sami trim his hair and beard for next week when Roman Reigns is back. It might be a big night for him.

John Cena is back for the December 30 Smackdown.

Rey Mysterio is rehabbing his knee when Karrion Kross and Scarlett come in. The trainer calls for security as Kross sits down. He’s not here to fight, but rather to talk about how Dominik Mysterio has treated his dad. Kross mentions that Scarlet is from Romania, where things can be very rough.

When she was a kid, her family had a champion thoroughbred horse. Then one day it stopped running as fast so they made it a work horse. Then one day it couldn’t even do that, making the horse totally worthless. One day you have to put a horse out of its misery. Security comes in, with Kross telling Rey to look at the time before leaving.

Video on Tegan Nox and all of the obstacles she has overcome.

Lacey Evans continues to train with the Marines.

Nox takes Baszler down in the corner to start but gets hit in the face. Rousey comes in to drop Nox again and mocks Morgan on the apron. The ankle lock is broken up rather quickly and Nox gets over to Morgan. Baszler comes in to run Morgan over as Raquel Rodriguez comes out, despite referees and agents holding her back. Morgan jawbreaks her way out of the Kirifuda Clutch, setting up the Shiniest Wizard from Nox for the pin at 4:08.

Here is hometown boy Kurt Angle for his birthday celebration….and the Alpha Academy interrupts almost immediately. They don’t think much of Angle, who leaves without having a fight. Otis tries some cake, with Angle saying they’ll need a lot of milk. Cue the milk truck (with Gable Steveson hanging out of the door) so Angle and Steveson can throw milk at the Academy. Kurt even busts out the hose (Cole: “ANGLE MILKING THIS FOR ALL IT’S WORTH!”) for a recreation of a recreation to end the show. Cole:” This was an utter failure!” 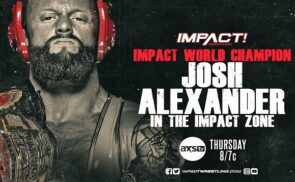 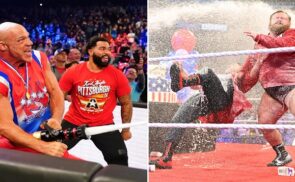