It’s a big night as we are starting this year’s Draft. That means we are going to be seeing a bunch of names moved from show to show, though it is not clear if NXT will be included as well. That could make for some interesting changes, but they might not all be for the best. Let’s get to it.

Commentary welcomes us to the show and sets up a few rules: half of the roster will be eligible for drafting tonight and half on Raw, but the rosters will not officially change until October 22, the night after Crown Jewel.

We waste no time as Sonya Deville and Adam Pearce are here to announce the first round picks:

Here are Roman Reigns and Paul Heyman for a chat, but first we look at a package on Reigns vs. Finn Balor from Extreme Rules. Reigns’ shirt now says We The Ones and he demands to be acknowledged, which the fans are VERY interested in doing. Heyman says that’s not good enough and talks about how the Demon is no longer undefeated.

Reigns performed an exorcism, and now he is moving on to Crown Jewel, which will not be taking place in Suplex City. That’s because Brock Lesnar will be running into the Suplexorcist and be smashed….but here is Lesnar in person. We get a long staredown and then the brawl is on, with Lesnar clearing Reigns out. The Usos come in and get dropped with F5’s, sending Reigns and Heyman away.

Charlotte isn’t surprised that she was brought over to Smackdown because Fox knows star power when she sees it.

Earlier today, Corbin introduces his new happy friend, Madcap Moss. Owens clotheslines him to the floor to start but it’s too early for a dive. Moss trips Owens up though and it’s a lot of laughter to send us to a break. Back with Owens making the comeback but the Stunner is countered into a rollup for two. Corbin plants Owens with Deep Six for two but Owens knocks him into the corner for the Cannonball. They head outside where Corbin hits End of Days (Cole: “Or should we call it Happy Days?”) and another version connects inside for the pin at 7:28.

We look back at Sasha Banks returning at Extreme Rules and costing Bianca Belair a shot at the Smackdown Women’s Title.

Here is Drew McIntyre to say that he had a great time on Raw but he has some unfinished business. There is a cloud hanging over Smackdown and it is time for McIntyre to break it up. With a point of Angela, McIntyre says he wants the Universal Title.

Here is Edge for a chat. After soaking in some loud cheers, Edge talks about how he is the only person here who was on the first Smackdown. Now though, he has been sent to Raw, which he sees as a challenge. Speaking of a challenge, we have Seth Rollins, who attacked him in Madison Square Garden three weeks ago and took him out again. Edge is on his way to 100%, and wants Rollins to come out here and make him saw Rollins is better. Cue a laughing Rollins on the Titantron.

Rollins is rather happy to be here….because he’s at Edge’s house. Edge storms to the back as Rollins lets himself inside and asks for Beth (Phoenix, Edge’s wife). Rollins helps himself to an apple and orange juice, while admiring Edge’s kids’ backpacks. As Rollins has a seat in the library, we cut to Edge frantically calling Beth and telling her to go to her brother’s (and ignore the groceries).

Extreme Rules Kickoff Show rematch. Liv knocks her to the floor before the bell but Carmella says hang on a second. She has a team of people put a mask on her, then goes back inside to beat Morgan up, including an X Factor. No match.

Hit Row is awesome in NXT. It’s going to be sad to see their immediate demise on Fridays.

Ziggler and Kingston start things off with Kofi hitting a jumping back elbow for an early two. It’s Ziggler being taken into the corner for the ax handle from Ford (still with the taped ribs). Gable comes in for an armdrag and sunset flip to Ford, setting up the ankle lock. That’s broken up in a hurry and Ford knocks all of the villains off the apron. Ford’s dive off the apron is cut off by Otis, who sends him hard into the barricade.

We take a break and come back with Gable countering Ford’s sunset flip into a northern lights suplex for two. Ford manages to get in a shot to Gable though and the hot tag brings in Dawkins to clean house. Everything breaks down, with Dawkins hitting his double underhook neckbreaker for two. Otis runs everyone over but gets sent outside, leaving Roode to hit a spinebuster for two on Dawkins. New Day is right back in though and Daybreak finishes Roode at 10:09.

Xavier Woods did some stuff with the Boys and Girls Club. Jenga was involved.

And now the final round:

Here are the final picks:

Jeff Hardy is in the back for an interview, but Brock Lesnar interrupts. He dismisses Hardy and Kayla Braxton to announce that he is officially a free agent because of Paul Heyman. Therefore, he can do whatever he wants to do. Mic drop.

We go to the Bloodline’s dressing room, where Paul Heyman is rather nervous. Roman Reigns asks if he and Heyman are good friends, with Heyman saying of course they are. Reigns says if they are friends, he needs to make sure that the Usos are drafted to Smackdown. Heyman says he’s the wise man but Reigns seems to laugh it off. Reigns: “YOU’RE ONLY THE WISE MAN WHEN I SAY YOU’RE THE WISE MAN!”

Reigns mocks the idea of sticking to the plan, and orders Heyman to go to Raw and make sure the Usos stay on Smackdown. Heyman thanks Reigns and leaves in a hurry. Reigns sends the Usos to Raw to make sure this gets done. If Heyman fails, leave him for dead.

Becky Lynch comes out for commentary as Banks grinds away on a headlock to start. A running hurricanrana drops Belair again as Becky talks about how unfair the Crown Jewel triple threat will be. Belair sticks the landing on a monkey flip and sends Banks into the corner as Becky rants about Banks interfering on Sunday. Banks’ crossbody is countered into a gorilla press drop (Becky: “I do CrossFit too!”) but Banks escapes the KOD. A HARD running forearm sends Banks outside and we take a break.

Back with Banks hitting a top rope Meteora for two. Belair isn’t having that and hits a double chickenwing slam, followed by a delayed vertical suplex for two of her own. Banks catches her on top and a tornado DDT drops Belair for another near fall. The frog splash gets two more but Belair fights up. That’s enough for Becky to trip her up though and Banks grabs a rollup for the pin at 13:45.

Post match, here is Charlotte to take out Banks and Belair, setting up the dueling title pose with Becky to end the show. 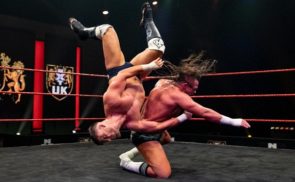 Go Over There: Champion Switches Brands In WWE Draft