I’m not sure what to expect from this show anymore and that’s a very cool thing to say. The stories have gotten awesome as of late and that makes me want to keep watching. This is the unofficial go home show for the Anniversary Show this Friday, where a lot of things will be set up for the MSG show. Let’s get to it.

TK O’Ryan/Vinny Marseglia vs. Marty Scurll/PCO here with no one in either corner. The Kingdom jumps them before the bell but a screaming PCO clotheslines them both. He and Scurll clear the ring and pose before settling down to work on O’Ryan’s arm. Marseglia breaks up a sunset flip attempt though and whips Scurll nearly through the barricade to take over. Back in and a double suplex gets two on Marty as we take a break.

We come back with O’Ryan ripping at Marty’s eye. A headbutt misses and it’s off to PCO for the scary power. Scurll backdrops the Kingdom to the floor and then backdrops PCO onto them for a good visual. Back in and a frog splash gives PCO two on Marseglia, who is right back up with a Russian neckbreaker on Scurll. What looked to be a piledriver on the apron is broken up and Marseglia suicide dives onto PCO. That lets O’Ryan bust Scurll’s spine, setting up a Swanton from Marseglia for two.

We take a second break and come back again with another Swanton driving PCO through a table. PCO almost immediately sits up but gets shoved off the top, sending him face first into a chair on the apron. O’Ryan hits a moonsault for two more on Scurll but Marty is right back with a powerslam into a Boston crab. A middle rope legdrop from PCO makes it even worse and Marseglia gets catapulted into the corner. The chickenwing makes Marseglia tap at 16:33.

Result: Villain Enterprises b. The Kingdom – Chickewing to Marseglia (16:33)

Rush rants in Spanish and seems to say this is his house. Bandido comes in and speaks more Spanish before offering a handshake. That’s not happening, but they’re meeting at the Anniversary Show.

Iwataini’s freshly won Women’s Title isn’t on the line. Iwatani kicks her in the ribs to start and ducks a big boot as they start fairly fast. A dropkick puts Holidead on the floor but she makes a quick save on top and tries a superplex. Since that might kill Iwatani, they knock each other to the apron instead, followed by a Stunner over the rope to drop Iwatani. An apron legdrop takes us to a break and we come back with Sumie Sakai cheering for Iwatani.

Holidead rams her back first into a few buckles and shrugs off the kicks to the ribs. A kick to the head works a bit better but Holidead is right back with a belly to back suplex for two. Iwatani is back with a crucifix bomb for two more, only to get blasted with a clothesline for the same. With nothing else working, Iwatani superkicks her into a German suplex, followed by another kick to the head. A moonsault finishes Holidead at 8:23.

Post match Kelly Klein and Team Kelly (A bunch of people in track suits who we’ve never seen before.) appears. Iwatani takes them out like the goons (who only attack one at a time) they are, leaving Kelly to hold up the title, setting up their title match at the Anniversary Show.

We look at the Briscoe Brothers fighting with Villain Enterprises, setting up their title match at the Anniversary Show.

Castle, with taped ribs, is shaken up after losing the fall in the ten man tag a few weeks ago. King isn’t shaking hands to start so Castle takes him down with a waistlock. The gutwrench is blocked though and we hit that Peacock Pose. King gets knocked to the floor and Castle does the strut. We take a break and come back with King working on the ribs.

A short DDT gets Castle out of trouble but it bangs up the ribs even more. They take turns missing a series of clotheslines in the corner so Castle goes with a suplex into the reverse Sling Blade for two. The wrestling isn’t working for King so he heads outside and grabs one of the Boys to throw at Castle. The distraction sets up the Royal Flush to finish Castle at 6:48.

Matt Taven is distraught over his title being destroyed and swears vengeance.

Pay per view rundown, with the quick promos from various people.

The Briscoes say they kill people.

Kelly Klein promises to win her title back.

Marty Scurll says the match may be in Kenny King’s hometown but it’s Villain Country.

Here’s Taven to rant about the title being destroyed. He’s out here by himself and Jay Lethal needs to come out here and face him like a man one on one. Lethal comes out in street clothes but the Kingdom runs in and beats Lethal down. Taven rips off Lethal’s clothes and the comeback is cut off by the numbers game. A table is brought in but here’s Jonathan Gresham to make a failed comeback bid. House of 1000 Corpses plants Gresham and he goes shoulder first into the post. A top rope elbow puts Lethal through the table to end the show. 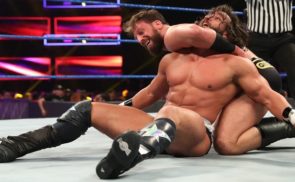